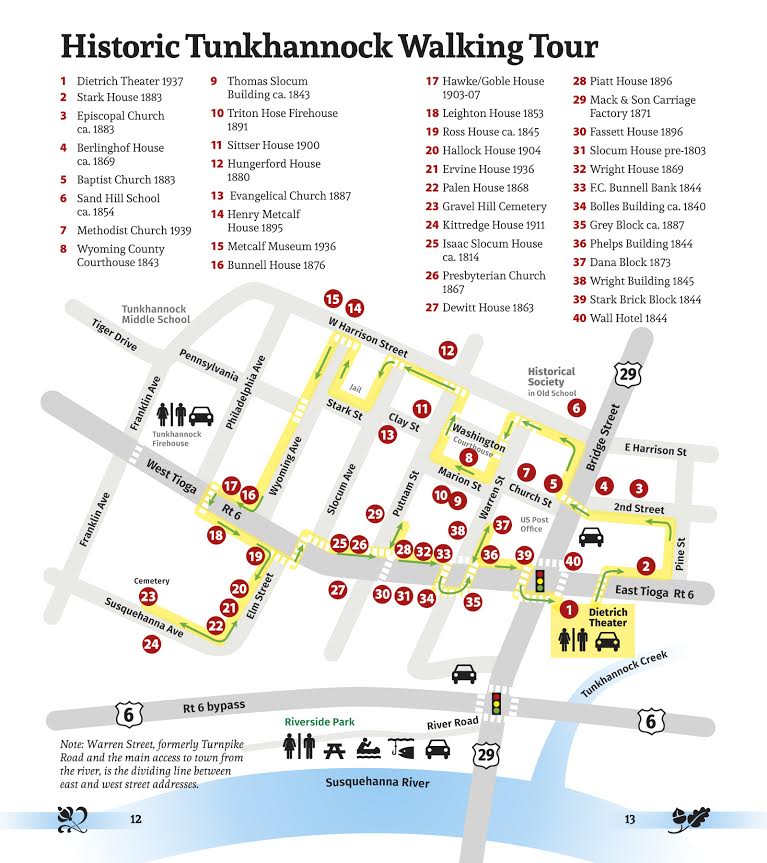 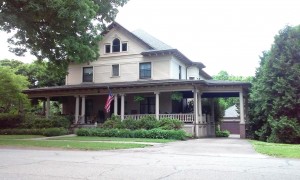 The Kittredge House (above) at 19 Susquehanna Avenue was built in 1911 and originally owned by William Kittredge, a local lumber baron and manufacturer of cosmetics and food flavorings. In 1915, he applied to the U.S. Patent Office for a trademark for his concentrated food extracts. It is dominated by a deep front porch and Ionic columns, turned spindlework balustrade, and porte-cochère at its west end. The house was later sold to his son-in-law, Donald Tiffany, who was was a model builder for the Cunard shipping line. One of its ships, the Lusitania, was sunk by Germany in 1915 and helped draw the United States into WWI. It is one of 40 featured homes, businesses, and houses of worship on the Historic Tunkhannock Walking Tour.

The Historic Tunkhannock Walking Tour had a great send off on June 25, with an audience packing a theater at the Wyoming County Cultural Center to enjoy a historical presentation that spanned at least a thousand years of Tunkhannock’s and Wyoming County’s history. Approximately 60 people then took part in guided tours, which will continue on Thursday evenings in July.

Guided tours for groups of 10 to 15 people are now being registered for Thursday evenings in July, with tours starting each night at 5 pm. Participants will view and learn the history of 40 featured structures from the sidewalks. Tour booklets are available at the Dietrich Theater, the Endless Mountains Visitors Center, the Wyoming Valley Chamber of Commerce and other locations for self-guided tours.

“The guided tours provide so much more information,” said Hiduk, who worked on promotional materials with graphic designer Diane Turrell. “We couldn’t possibly fit everything there is to say about each building in the booklet.”

The full-color, 24-page booklet features a centerfold map with a designated route highlighted in yellow. The route was designed with both ease of walking and safety in mind. It follows a slow incline into the borough’s western neighborhoods and eventually brings tourgoers back into the heart of Tunkhannock’s business district.

A companion exhibit of six of the featured buildings on the tour opened earlier in June and will run through July the main lobby of the Dietrich Theater.

“It really gives you a glimpse into Tunkhannock’s past,” said theater director Erica Rogler, noting that six showcases are brimming with photos and artifacts. “The photos really give you a sense of the people behind the stories,” she added.

Reservations for July tours are being taken at 570-996-1500. Groups of 10 to 15 people wishing to take the tour on other dates and times through the fall can contact the Theater to inquire about the availability of guides.

The estimated time for self-guided tours is an hour and a half. Guided tours may take more time. Tourgoers are advised to wear sturdy footwear and remain hydrated. Tourgoers participate at their own risk and will be required to sign waivers for guided tours.

Those participating in guided tours will also receive a sheet of coupons redeemable throughout the summer at shops and restaurants in Tunkhannock, thanks to the Tunkhannock Business & Professional Association. Project partners hope that participants will make time to do some shopping and enjoy a meal before or after their tours.