By: Rick Hiduk
In: Agriculture
With: 0 Comments 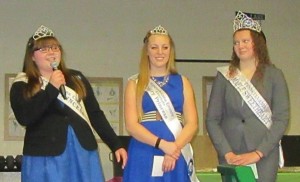 It’s about farming. It’s about food. It’s about families. And it’s fun. The 27th annual Susquehanna County Ag Day drew more than a thousand people from across the county and beyond to Elk Lake High School on March 4. More than a hundred commercial vendors and organizations that support agriculture distributed gifts and literature to guests while explaining their respective roles in the region’s diverse agronomic landscape.

Much of the event was coordinated by The Penn State Extension, the very existence of which is ironically threatened by an impending budget cut at the state level. In addition to conducting morning and afternoon classes on topics ranging from pesticide use and robotic milking equipment to pond and bee hive maintenance, Extension representatives circulated a petition among visitors, and asked them to push their legislators to reverse the governor’s plan. 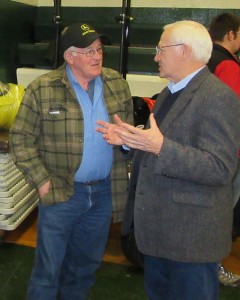 Among legislators in attendance were Rep. Tina Pickett, Sen. Lisa Baker and Sen. Gene Yaw (above, right with an unnamed constituent).

Dairy Maids and Princesses and the state’s Maple Sweetheart delighted guests with their opening remarks and the distribution of ice cream, milk shakes, cartons of milk, cheese samples, and candy made from maple sugar. They took a break from their duties at one point to gather on stage (below) to sing “Happy Birthday” to an honored guest.

Also on the stage were 35 pies spread out on tables (above) ready for afternoon judging in youth and adult divisions. Many guests stayed to the end of the afternoon to bid on the pies, helping to raise $4,640 for the benefit of the Susquehanna County 4-H Dairy and Dairy Princess Promotion programs.

According to Extension education director Michelle Kowalewski, adult winners in the baking contest were Sally Button and Jeralyn Adams, both of Montrose. Adams, Kowalewski noted, garnered top prizes for her pies at the Hartford Fair last summer and at the recent Pennsylvania Farm Show.

Equally impressive was the winning of prizes in the youth category by three siblings from Meshoppen – Austin, Autumn, and Kyle Bonavita. The fourth youth winner was Kaelyn Brant from Susquehanna. All are 4-H members. 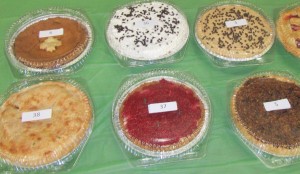 Some businesses and organizations with shared interests collaborated on exhibits. For example, the Endless Mountains Heritage Region, which supports agricultural preservation, teamed up with the Endless Mountains Visitors Bureau, a strong proponent of agro-tourism. The organizations were represented by EMHR program coordinator Hillary Robinson (below) and EMVB executive director Jean Ruhf (not pictured). 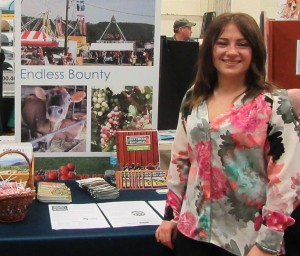 At the entrance to the gymnasium where most of the event takes place, three women representing the Rascal Fair Farm (below, from left: Sharon Milewski and Terry Hornung and, not pictured, Cathy Sinnott) sat casually carding and spinning wool and knitting garments while they spoke with passersby about the tools of the trade and differing processes for the varieties of fibers they use. 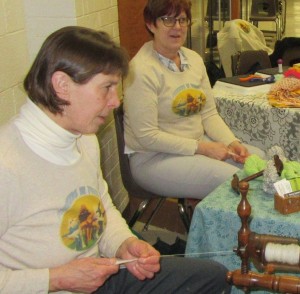 While much of the focus of Ag Day was on food and other farm products, many activities were also geared toward healthy living and farm safety. The main hallway leading away from the gymnasium was dubbed “Health Alley.” The American Red Cross, the PA Department of Health, Big Brothers Big Sisters, Caregivers America, and Trehab Drug & Alcohol Agency were among the contributors.

Trehab drug and alcohol specialist Cassie Benscoter (below) engaged people of all ages with a game called Marijuana Jeopardy. Comprised of questions from categories like Laws, Body Effects, and Signs of Use, the game was developed to spur open and honest dialog about a drug that is now legal to use medicinally in half of the United States. One couple who didn’t get many correct answers during their turn at the game joked that they were “losers,” despite having fun. 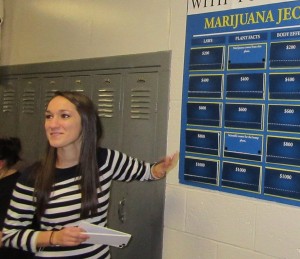 “Absolutely not,” said Benscooter. “This is about starting a conversation, which we did. We both won.”

Extension member, Master Gardener and Susquehanna County Farm Bureau representative Cheryl Matelevich (below) intrigued parents and children with an exhibit and demonstration of cleaning supplies and other common toxins found in the household – the packaging of which is frighteningly similar to popular beverages and other edible items. She also encouraged parents to use only the patented Mr. Yuck stickers to designate toxic products in the home. The old skull-and-cross-bones, she noted with several articles of children’s clothing, has become a pop icon and has lost its former meaning. 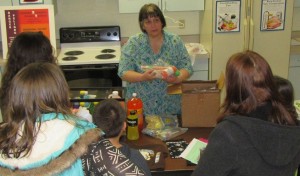 Vendors and guests alike have learned to look forward to lunch in the school’s cafeteria. The three-dollar meal and opportunity to break bread with fellow farmers and ag supporters has become so popular that tickets were sold in flights to assure that guests had a place to sit. Lunch on March 4 consisted of ham, macaroni and cheese, green beans, mixed fruit, cranberry sauce, dinner roll, piece of cake and – of course – milk.

For more information about the Penn State Cooperative Extension program, log on to www.extension.psu.edu. If you want to help ensure its continuation, which is NOT part of Gov. Tom Wolf’s proposed budget, contact your elected state officials and encourage them to reject the plan.