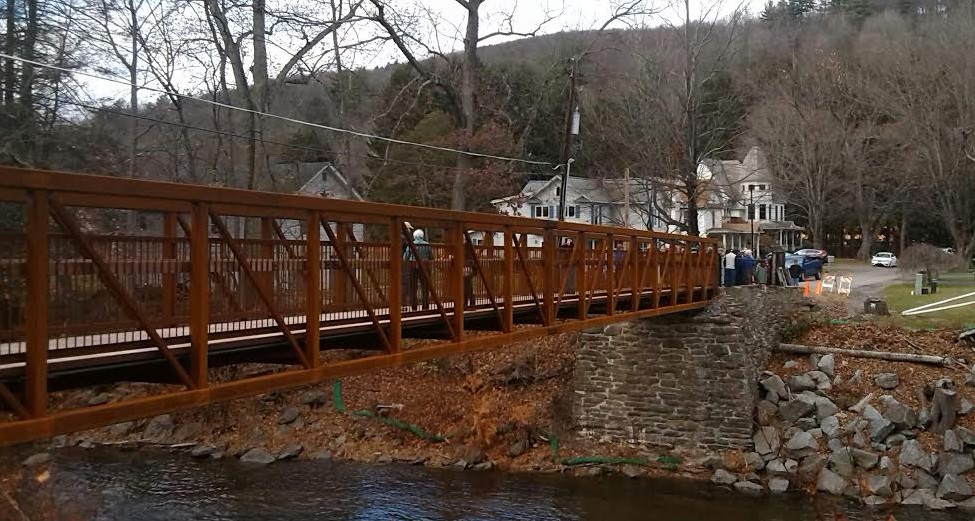 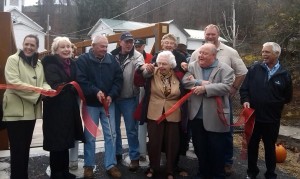 Another milestone of the Seneca Trail project was reached on November 14 when residents of Eaton Township and its supervisors celebrated the official opening of the Eatonville Pedestrian Bridge. The single span replaces an old steel truss bridge once took vehicular traffic from Route 29 over Bowmans Creek through the village of Eatonville to Keelersburg and beyond. The new bridge is a keystone of an endeavor that Endless Mountains Heritage Region (EMHR) has helped to support since its inception.

EMHR was among numerous project partners represented at the Saturday morning event, which was coordinated by Eaton Township, Creekside Gardens and the Eatonville United Methodist Church. Guests and program participants also included members of three nations of the Six Nation confederacy of Native Americans in New York State. The multicultural, multi faceted event was well-attended and a shining example of what can be accomplished when organizations and other entities work together.

Eaton Township supervisor Randy Ehrenzeller led the program, which included a ribbon-cutting on the west side of the bridge, the unveiling of a sign at the entryway that is framed by a section of steel saved from the original bridge, a ceremonial crossing of the bridge led by long-time resident Mary Kukuchka, lunch in the basement of the church, and the planting and dedication of a Tree of Peace brought to Wyoming County by Hickory Edwards of the Onondaga Nation. The Seneca Nation was represented by Geri Reisinger, a sacred site manager who resides in Kingston.

EMHR Wyoming County board member Rick Hiduk relayed the sentiments of executive director Annette Schultz to those in attendance, stressing EMHR’s commitment to trails and greenways that provide opportunities for residents and visitors to explore heritage resources. Hiduk spoke after prayers of dedication and thanksgiving were offered by the Rev. Betty Reilly of Eatonville UMC and Vicki Shenandoah, a member of the Oneida Nation.

The prepared statement that Hiduk read echoed the thoughts expressed by both Reilly and Shenandoah. “Acknowledging and marking Native American pathways such as the Seneca Trail reminds us that we follow in the footsteps of others, and it is now our turn to take responsibility for and be faithful stewards of the land. We share in the excitement of each new facet of the project, including the pedestrian bridge opening today.”

EMHR’s contribution to the Seneca Trail project has included funding for trail-related branding, logo design, and promotional materials. The logo for signage and brochures was unveiled in May 2014, and the signs were produced and erected during the summer of 2014. The bridge that effectively reunites the two halves of Eatonville that were separated in 1987 when the old bridge was closed to traffic also provides parking for and access to the trail, which loosely parallels Route 29 from the border of Monroe Township to the south and the Susquehanna River to the north.

Collaborations such as this demonstrate EMHR’s commitment to preserving and promoting local cultural and historic sites and programs while keeping an eye on the future of heritage resources. To learn more about the organization, including opportunities for involvement, log on to www.endlessmountainsheritage.org. 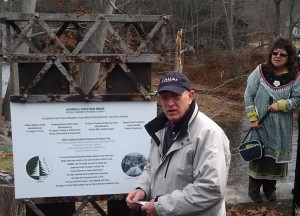 Eaton Township supervisor Randy Ehrenzeller unveils the sign at the west entrance to the new Eatonville Pedestrian Bridge. Endless Mountains Heritage Region is one of numerous project supporters acknowledged on the sign, which is framed in a section of the steel bridge that the new span replaces.