By: Rick Hiduk
In: Adult Education
With: 0 Comments 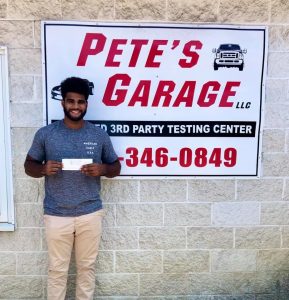 Nighttime CDL students Katrina Capwell (top, left) of Montrose and John Phillips of New Milford take a break outside “Blue Pete” at the CDL Training Center at the Susquehanna County Career & Technology Center. At 20 years, daytime student Evan Turner (above) of Tunkhannock is the youngest of the first class of CDL trainees. He has successfully completed both his online certification and driving exam.

In the course of the past two years, several businesses involved in the natural gas industry partnered with the Susquehanna County Career & Technology Center (SCCTC) for the construction of a CDL training school on the campus in Springville. The start of classes was delayed until June 22 by the coronavirus pandemic, but the first group of future truck and heavy equipment drivers has finished their five- and 10-week courses, completed online permitting, and moved on to road testing.

As of Aug. 20, eight of nine daytime students enrolled in the first CDL classes had taken their driver’s test at a certified third-party CDL testing site in Lackawanna County. Seven of those eight passed the road test on their first try, and the eighth went back the following week and successfully completed the exam.

Five night students, whose course takes 10 weeks, have also completed permitting and began road testing on Aug. 22. While the graduation rate is certainly impressive, daytime instructor Dale Fisher maintains, “We are not trying to push anyone through the program. We want to make sure that we are putting safe drivers on the road.” The school offers additional practice time behind the wheel for anyone who requests it prior to testing.

Brian Eso’s night students were equally excited about their upcoming road tests. Getting all five of them permitted via PennDOT’s online exam, which combines knowledge and skills, is quite an accomplishment. One of Eso’s students, John Phillips of New Milford, additionally picked up endorsements for driving double and triple trailers.

Upon passing the road test, each will finish with a CDL Class A license with tanker endorsement. That’s when the job searches begin for most of the students. Four students in Eso’s class took the course for advancement within their current companies. Fisher said that Holcombe Energy Resources and Linde Corporation may be first in line to snag a couple of the new drivers, but each student feels confident of obtaining a new job with family-sustaining wages.

Creating certified drivers to fill vacancies among industry partners was just one goal when they approached SCCTC administrators two years ago to talk about the potential for a training center. In addition to Cabot, key investors in the school included at Cabot Oil & Gas and subsidiary, GDS; Meshoppen Stone and subsidiary, SGFS; and Diaz Companies. They also all wanted to create more jobs for the area.

As the first graduates of the CDL training center move on, SCCTC is taking applications for the next set of classes that will start on Aug. 29. According to Eso, they are filling quickly. For more information, interested readers can call the school at 570-278-9229. 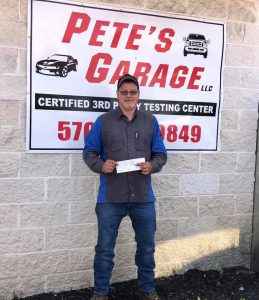 Daytime student Fred Shiptoski of New Milford shortly after passing his road test at the end of five weeks of training.

Nighttime student Jim Tierney of Tunkhannock settles into the rig at the CDL Training Center at the Susquehanna County Career and Technology Center. 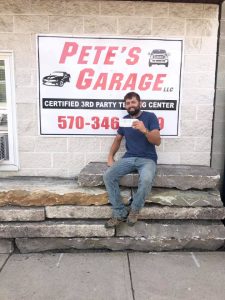 Daytime student Herman Nissley of LeRaysville proudly displays proof of his passing his driving exam at the end of five weeks of training.