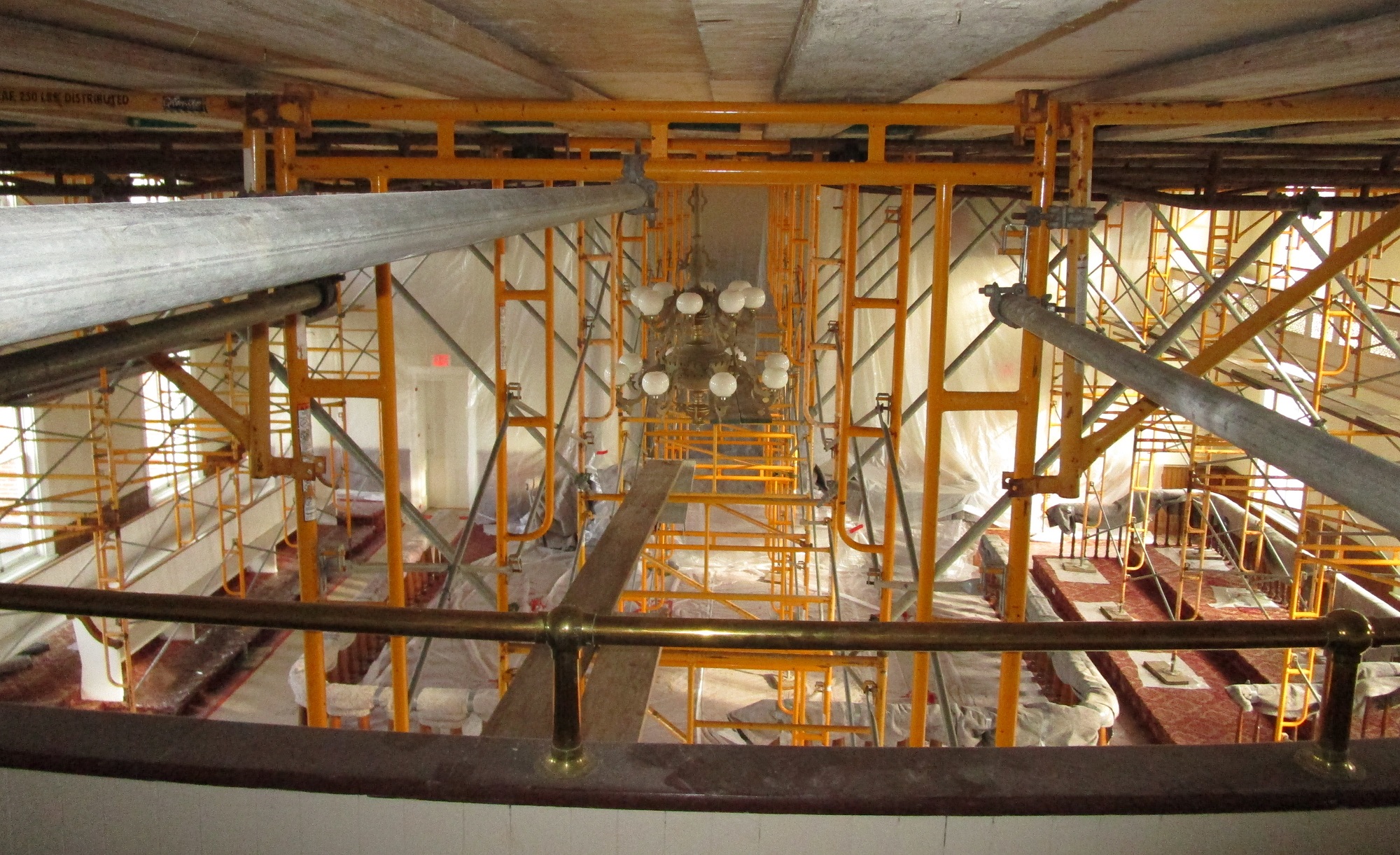 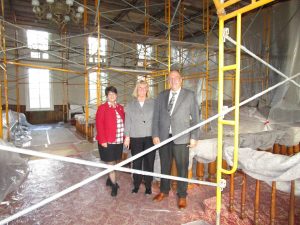 Courtroom 1 at the Susquehanna County Courthouse at Montrose was barely recognizable last Wednesday with scaffolding in place for renovations that should be completed by early January. Susquehanna County commissioners (above, from left) Betsy Arnold, MaryAnn Warren and Alan Hall inspect the progress of renovations. Changes to the floor plan are intended to make more room for attorneys and litigants, as well as for a public that has a renewed interest in hearings and trials.

Capping off years of renovations and restructuring of the Susquehanna County Courthouse at Montrose, historic Courtroom 1 is scheduled to reopen in January with a new ceiling, refurbished walls and new carpeting. A more open floor plan for the judge and lawyers will also make the space ADA-compliant, one of many long-term goals associated with a project that also brought three buildings together as one. A new jury box will also eliminate barriers for people with physical disabilities.

The courtroom closed just over a week ago, so that drop cloths could be spread out and scaffolding erected, effectively filling almost every square foot of the two-story room, leaving space for the large chandelier at the center. A temporary floor was erected just below the existing ceiling to allow for workers from Champion Builders of Kingston to run aluminum cables to which new sheet rock will be affixed.

Courtroom 1 is as old as the county courthouse itself, dating back to 1854. According to Susquehanna County commissioner Alan Hall, the spacious room changed very little for nearly 150 years until carpeting was installed about 20 years ago when judge Kenneth Seamans presided over the court. “This was long overdue,” Hall said of improvements that have been financed with Act 13 funds. “It’ll be good for another 30 to 40 years.”

Dismantling of the scaffolding should begin on Dec. 11. As the contractors work their way down the interior, they will make repairs to the lath and plaster walls. Subsequently, technicians from Automated Lifestyles of Moscow will come in to redo lighting, sound and video. The most noticeable changes, however, will take place on the first floor.

Hall noted that the judge’s bench and the witness stand will be separated to make the witness stand ADA-compliant. The jury box will be dismantled and a new one built closer to the east wall. The railing that wraps around the desks used by attorneys and their clients will be cut into pieces and moved back to allow greater separation between the parties and room for multiple attorneys, which is common during children & youth-related hearings.

Carpet tiles will be laid instead of rolled carpet because it is easier to replace a segment or two. Hall pointed to holes in the old carpet resulting from a retrofitting of the heating system some years ago and other sections that are badly stained. The pew-like benches in the public gallery will get new cushions. The wooden wainscoting will be restained.

Improvements to the gallery come at a time when audiences for most types of hearings and trials are on the rise after years of decline. “The crowds are starting to come back,” Hall remarked. “Social media has increased the appetite for people to know what’s going on.”

The courtroom projects, which will include new carpet tiles on the dual stairways from the lobby and some minor renovations to Courtroom 2, are projected to be complete by the second week of January. “I think we’re well on track for that,” said Hall. 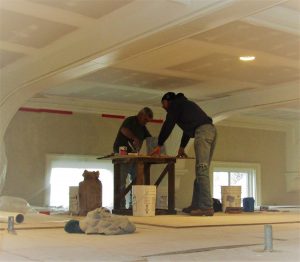 Workers from Champion Builders operate in the temporary confinement of a floor supported by scaffolding. When the new ceiling is finished, they will work their way down the walls, restoring decaying plaster on their way to the floor.