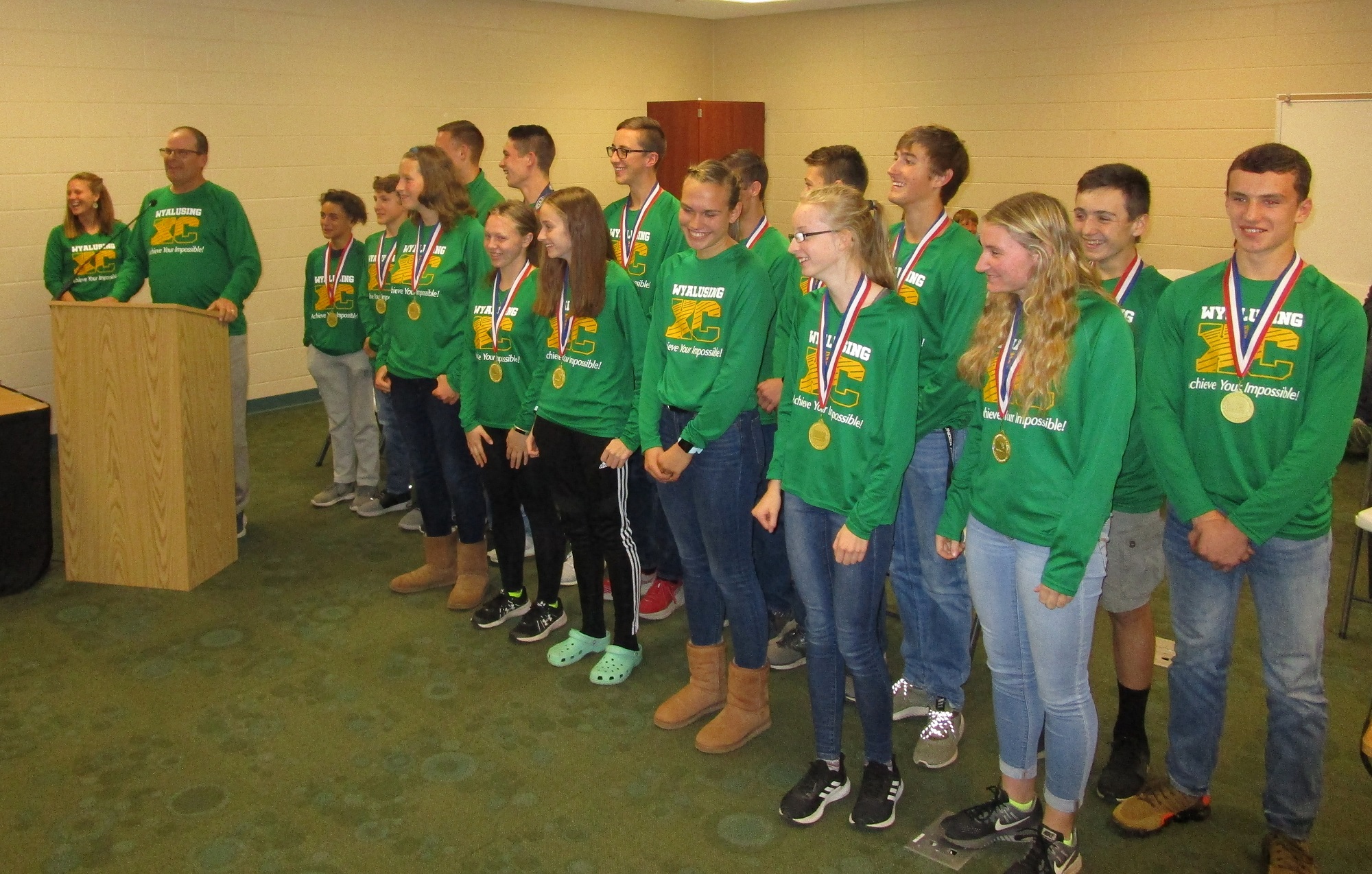 Wyalusing Cross Country coach Jim Schools (at podium with coach Ellen Coates) gets a laugh out of team members as he recaps their winning season for the Wyalusing Area School Board.

The Wyalusing Area School Board held their regular monthly public meeting on Nov. 11 with all board members and district administrators in attendance. A pair of school trips got boosts from donations accepted by board members, two teams of dedicated runners traded accolades with their coaches, and a retiring board member took a parting shot at cyber schools and their affect on the district’s budget.

Wyalusing Valley Elementary School principal Daneen Lantz was excited to reveal plans for the purchase of a book vending machine in association with the school’s Positive Behavioral Intervention Support (PBIS) program. When kindergarten through sixth-grade students receive a certificate for going “above and beyond” the behavior expected of them, they will be able to redeem the certificate for a special token to retrieve a book from the machine, which will be placed in the school lobby. 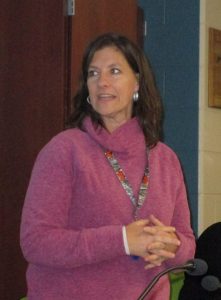 The Bookworm Vending Machine is a joint effort of the school’s PTO and the Wyalusing Area Education Foundation (WAEF). Lantz (above) credited PTO president Kelly White and Duane Naugle, who was in attendance, for bringing the idea to fruition. Naugle noted that manufacturing of the machine had begun that morning and that it should arrive in six weeks. Wyalusing students will create the artwork for the machine. The WAEF contributed $3995 for its purchase.

The WAEF donation and others approved at Monday night’s meeting effectively doubled the year-to-date monetary contributions to the school district by individuals, area businesses and non-profit groups. Also reported by the school board were two $300 donations by the New Albany VFW for the upcoming fifth- and sixth-grade trips; a $150 donation by Alicia Sutton to the elementary school for miscellaneous supplies; $500 from the Kellogg Mountain Rod & Gun Club toward the fifth-grade trip to Philadelphia; and $1,000 from JB Hunt Transport earmarked for Emily Alt’s third-grade classroom.

“It’s amazing the donations we receive from the community each month,” said board member Gene Anne Woodruff.

Superintendent Jason Bottiglieri also cited PS Bank for a generous contribution to the Northern Tier Career Center that allowed for the purchase by students of steel-toed boots, cosmetology kits, welding helmets and other supplies through the state’s EITC program and Common Wealth Charitable Management.

Runners Thank Coaches for Their Success

The boys and girls cross country teams were invited to the meeting to celebrate an exceptional season, including winning the small schools division at the recent state championship and finishing fourth and 14th, respectively, among all other teams in the state. It was the second year that the boys team had been undefeated, and the girls logged eight wins and just one loss this season.

Coach Jim Schools (below, left) said that the youths went into each meet with a “winning mindset and a champion mindset,” a theme that he told him to carry over into their school work and life in general. 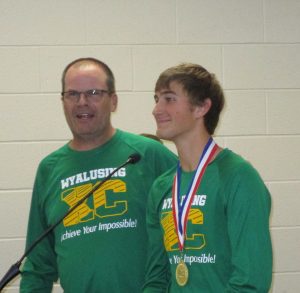 Runners Logan Newton (above, right) and Kemuel Laudermilch took turns at the podium thanking Schools and coach Ellen Coates for instilling confidence and pride in every team member and leading them to victory.

Also celebrating a victory with the board was Emily Lewis, recent winner of the Bradford Sullivan Counties Outstanding Young Women (OYW) contest. Emily related that an early inspiration for her was WVHS alumnus Kirsten Ballard, a former OYW winner. “I always looked up to her and thought, ‘That’s who I want to be,’” Emily stated. Of the OYW program, she said that it empowers young women and teaches them many skills.

Board member Richard Robinson noted, as a long-time judge of the evening program, that OYW is “an intense competition.” 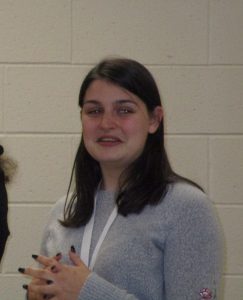 “It is an intense competition, but there is no animosity between the girls,” Emily (above) responded. “It’s a group of girls lifting each other up.” Emily invited fellow OYW contestant and WVHS school board representative Emily Moyer to the podium with her and noted that the two of them were among five Emilys involved with OYW this year.

Richard Robinson was thanked by Bottiglieri for his 12 years of service on the school board. Barb Prevost and Jean Vande Mark were both recognized for eight years as board members, and Vande Mark was shown her name plate on a plaque and presented with potted flowers, as she was participating in her final meeting. 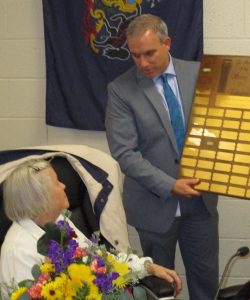 Board chairman Chad Salsman remarked on Vande Mark’s ongoing interest in the Wyalusing Area School District, from the time that she was a news reporter to her first running for a seat.

In a final display of her dedication to public education, Vande Mark reviewed the district’s monthly bills with dismay, pointing out the $72,000 paid for students in cyber education and charter schools. “It’s very painful,” she said of the figure and her belief that Wyalusing offers an outstanding educational opportunity for youths. “I don’t begrudge parents making choices, but I think that students should be together, not getting their lessons from a TV screen.” Vande Mark said that she is encouraged by pending changes in the relationship between public and charter schools proposed by state legislators, and Bottiglieri assured her that the district’s administrators continue to work to reign in cyber education costs.

In her report to the board, elementary school representative Camryn McMicken said that she and her fellow sixth graders are getting excited about their Nov. 20 class trip to Washington, D.C. The annual adventure for Wyalusing students is preceded by months of learning about the nation’s capitol, its history and its many monuments.

Camryn encouraged board and audience members to look at the many renderings of monuments and iconic capitol buildings constructed by sixth graders that are currently on display in the elementary school lobby, which many people were observed to do after the meeting ended.