Lawton Poised for Stream Project on Anniversary of Flash Flooding

By: Rick Hiduk
In: Lawton
With: 0 Comments 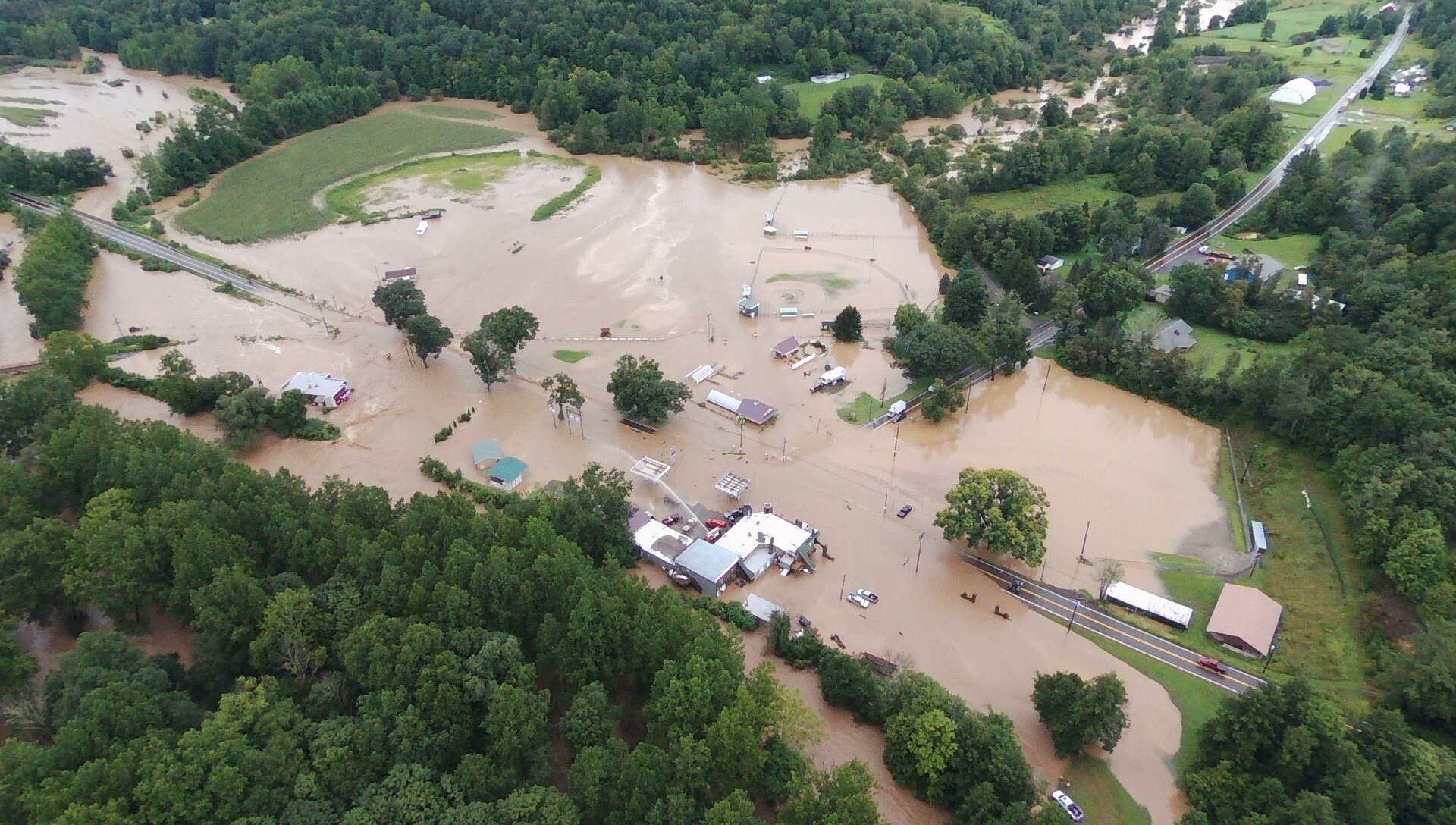 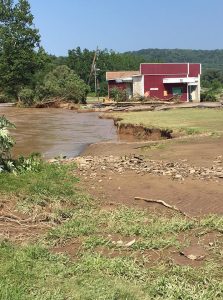 Taken from a drone operated by Hunter Williams, the flash flood that inundated Lawton on Aug. 14, 2018 is observed (top) near its crest. The dramatic erosion of properties adjacent to Wyalusing Creek in Lawton, including that of Community Bank (above), is apparent in this post-flood shot taken from the Flynns’ property. A year after swiftly rising waters overtook roads and properties in the Lawton area, some residents and business owners are expressing gratitude for the support of their community and first responders and for the fact that there were no casualties beyond the collateral damage and the loss of one key business.

2018 was notoriously wet for most of northern Pennsylvania. A cool, soggy spring made it difficult for farmers to get their crops planted, and continued wet weather made cutting and bailing hay difficult. Many home gardeners simply given up. For many in the area, it seemed that things could get no worse than they were on August 8, when the tributaries of Wyalusing Creek in western Susquehanna County breached their banks, inundated some roads, and flooded low-lying areas.

While few people in this part of the state are strangers to flooding, last year’s high water events were different. “The other floods were with hurricanes, so you were expecting it. It was like an impending doom that you just waited for,” said Renee LaRue, whose family operates a produce farm and stand along Route 706 east of the village of Lawton.

Mike Jenner, second assistant chief at the Rush Fire Company, agrees. “My wife, Becky, keeps an eye on the creek,” he explained. “She knows from past experience when it’s getting bad.”

Between Aug. 13 and 14, a cluster of thunderstorms stalled near the Pennsylvania/New York border after persistent showers on Aug. 11 had already saturated the ground. Mike went to work at Procter & Gamble in Wyoming County that Tuesday morning, but he stayed in touch with Becky via text.

There was no brightening of the sky as the day evolved; just dark clouds and relentless rain. Becky sent a message to Mike that things were getting bad. Within a few minutes, fire chief Jim Conboy confirmed her analysis. Mike got permission to leave work and headed with the safety of both family and community in mind. His first stop was to pick up his daughter and grandson, Bonnie and Tripp.

“I was afraid that they were in harm’s way,” he related, noting that there was a trickle of water running across Route 706 at it’s intersection with Route 267 north when he arrived. “I told her, ‘You’ve got five minutes to grab what you need.’” Mike continued up Route 267 to the fire station to assess the calls that were coming in and to see who was available to respond.

Meanwhile, members of the Flynn family, who own Flynn’s Stone Castle, an iconic service station and general store at the center of Lawton, were getting reports of flooding in Montrose. “Our water comes from there,” Francis Flynn noted. “I said, ‘Uh oh. This is going to be bad.’ With 15 to 20 minutes, it was a foot and a half deep and starting to come into the store. We tried to do some sand bagging out back. That was a useless effort.”

By the time Mike returned to his daughter, the water at the intersection was nearly a foot deep and swift. “I’ve lived here for 48 years,” he remarked. “I’ve never seen the water come up that fast.”

“We have a little creek out back,” Renee recalled, in reference to Deuel Creek. “We were actually more concerned about that.” But, she also could see the water rising down across the road from her house. Her father-in-law checked on it and told Renee that it was filling the fields.

The flooding of Aug. 14 was also more widespread than that of a week prior. Rush received an urgent request from Bradford County EMA to assist in shutting down Route 706 near the county line. Mike informed their dispatchers that he more or less had his own hands full. Traffic was backing up in all directions. But sent third assistant chief Ed Bieleski out County Line Road with a brush truck and another firefighter in tow. They ended up shutting down Rt. 706 at its intersection with 267 south. “He was kind of stuck there for a while,” Mike said of Bieleski.

Mike had made his way back to the station from Rush, where the crew readied an engine to begin evacuations from Flynn’s. Conboy was already at the store, pumping out water. “He felt there was enough water that we needed to evacuate people,” said Mike of the store employees and upstairs tenants. It was about 10:30. Utilizing Engine 4 with its five-man cab, 18 people were removed from Flynn’s and transported to the firehouse. “We really didn’t move much from there,” Mike noted. “We were pretty much stuck.”

The staff of Community Bank did not have to be told to get out, Mike explained. He’d encouraged them to evacuate a week prior, and they were quick to leave again on Aug. 14. “When this one came through, they assessed the situation themselves and already knew what to do,” Mike surmised.

From the front door of Flynn’s, Christel Flynn shot and posted a video of the frightening scenario at the intersection as the firetruck made its way back toward the store. She posted it to Facebook with a dire warning: It’s really bad here. Stay away!

“We had turned the utilities off, because some of our power boxes are in the basement,” Francis noted. Fortunately, there were enough people remaining to keep pushing the water out the open front door. That was not the case in 2006, he remembered, when the creek rose during the night. Despite some water in the hardware center, the store fared much better in 2018.

“We didn’t technically close, even though customers couldn’t get here,” said Francis. Tenants had returned to their apartments by nightfall.

“As quickly as it came up, it went down,” Renee remarked. But not before it destroyed about 20 acres of their crops. The LaRue’s lost everything but their sweet corn. They were able to supplement the offerings in their produce stand, working with Mennonite farmers in Jersey Town to keep the bins full.

“Our customers knew that it wasn’t our stuff. But their loyalty got us through the season despite that. It was amazing,” Renee stated. “We were still able to get out our freezing corn orders.” Like many local growers, there were gullies to fill in and debris to be removed from fields. Strawberry plants that were submerged last summer did not yield as well this year as those that were not flooded, and the LaRues have had a tough time growing cucumbers. “Ben thinks that something settled into the soil,” Renee said in reference to the overwashing of the fields.

The village’s ball parks were also flooded, but damage was minimal. The recreational area of the Hayloft Tavern were inundated, but the bar and grill were spared, sitting above the plane. Employees and patrons visited affected families with food and beverages and assisted with cleanup.

The greatest loss to Rush Township in the long run was the decision by the corporation that owned Community Bank not to reopen the Lawton Branch. And, while high water in the future is almost a certainty, the Flynns got an important piece of mail on Monday.

“We just received paperwork today that a flood wall is going to be built behind the store. That’s good news,” Francis declared, adding that it appeared from the notification that the Natural Resources Conservation Service (NRCS), a subsidiary of the US Department of Agriculture, will oversee a project along Flynn’s property line to where the bank used to be. “That will help us out and relieve the pressure,” said Francis.

A NRCS spokesperson confirmed that the work to which Flynn is referring is one of two projects planned in Lawton to stabilize the stream bank and prevent further erosion. It is not a wall, nor will it raise the level of the bank. It is one of 92 projects scheduled in 26 northeastern PA municipalities in the wake of last year’s flooding. 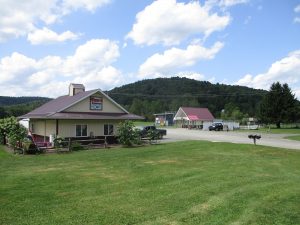 It’s hard to imagine that just a year ago the flower shop in the foreground and ball field in the background were inundated by flood waters and that the ice cream shop at right was surrounded by high water. 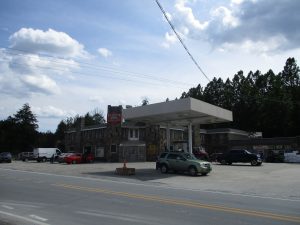 Just a year ago, flood waters were coursing around the these gas pumps at Flynn’s Stone Castle, and Routes 706 and 267 were impassable at this intersection. 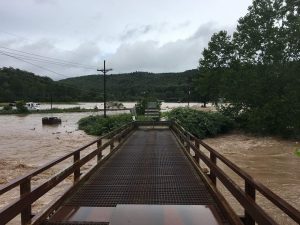 Even though the old bridge that use to connect Route 367 with Route 706 was already closed, the scenario brought on by fast rising flood waters seems almost inconceivable if not for this photo by Hunter Williams.