Bradford County Veterans Memorial Park Association founder Joe Doherty announced that the flags that were raised at the park in Towanda at last year’s dedication ceremony have been officially changed over.

Vietnam War combat veterans Don Richardson and Roy Schrimp were among those to assist with the changeover, which Doherty called a “a sure sign of goal-oriented progress.”

“It is this inter-organizational support which assures a prideful future for this veteran memorial project,” Doherty stated.

Although the $75 honorarium paver program had to be ended, pavers are still available at $100 each. Larger one-foot-by-one-foot pavers can still be ordered at the original price of $275, but there are only a limited number of those left to be engraved.

Readers wanting to know more about the Bradford County Veterans Memorial Park project and how to support it should log on to www.bcvmpa.org. 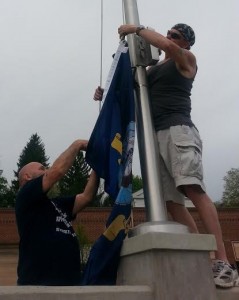 Roy Schrimp (left) of the Marine Corps League Detachment 445 Towanda and Don Richardson of AmVets Post 187 Towanda/Wysox assisted with the first official changeover of flags at Bradford County Veterans Memorial Park since the groundbreaking dedication ceremony a year ago. Both are also members of the VFW Beirne-Webster Post 1568 Towanda, which donated the new flags. 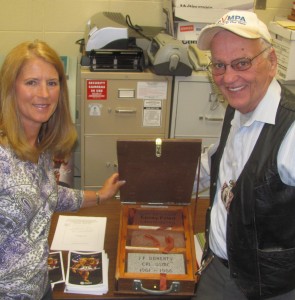 BCVMPA operations manager Nadine Furman (left) and Joe Doherty display engraved pavers that will soon line the walkway of the park in Towanda.

2014-05-16
Previous Post: Open Your Senses to Nearby Treasures – Plan A ‘Staycation’ in the Endless Mountains
Next Post: LeRoy Heritage Museum to Host Civil War Encampment