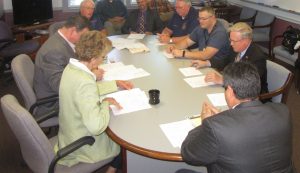 Wyoming County will receive $1,031,850 via the Public Utility Commission as its share of impact fees collected from natural gas companies in 2017. The number is up about $30,000 from last year, according to Commissioner Tom Henry, who broke the news on Tuesday morning during the regular commissioners meeting. Commissioner Judy Mead suggested that the 30 percent increase indicates that there were a number of new wells started in the county last year. Henry added that municipalities throughout the county will see similar increases in disbursements this year.

Four requests from the Wyoming County Housing & Redevelopment Authority (H&RA) were approved by the commissioners that were brought to the table by H&RA grants administrator Lisa Hahn during a work session held last week. Two involved the shuffling of some funds: $1 million for the Bridgeview affordable housing project in Nicholson and $14,000 for the demolition of a former pizza shop in Meshoppen. Engineering for the Nicholson project and demolition of the former school there have already been completed. The commissioners also extended requests for six-month extensions on housing rehab funds from 2013 and 2014.

The commissioners agreed to offer another letter of support for homeowners around Chamberlain Pond in Windham Township who are seeking a $500,000 grant for reconstruction of the dam that holds back Little Mehoopany Creek there. The commissioners wrote a similar letter in 2017, but the applicants were unsuccessful at procuring the funding. After 2011 flooding, the Pennsylvania DEP took a more active role in ensuring that old dams like the one at Chamberlain and nearby Negro ponds can endure a 100-year rain event. At that time, it was noted that the pond would have to be breached if the dams could not be brought up to par.

Chief Clerk Bill Gaylord related that the state will soon be mandating that agendas for county commissioner meetings be completed and posted online more than 24 hours in advance. The commissioners will not be able to alter anything on the agenda unless it is an emergency situation. Gaylord was uncertain as to when the new regulation would take affect.

Gaylord said that another recent heavy rainstorm had overwhelmed the rain gutters at the Human Services Building in Eaton Township. The gutters are simply too small to handle excessive runoff, he noted, which most recently resulted in seepage through window sills and water in the basement. Gaylord recommended the building be fitted with industrial rain gutters and has begun soliciting bids. The funds for that and the removal of some trees in from the building are within this year’s budget.

Gaylord concluded his report by showing those in attendance the relatively small GPS units that will be installed in 20 county vehicles. In addition to allowing officials to monitor where vehicles are, the GPS units will keep track of driving speed and needed maintenance such as oil changes. The cost of the units, which can fit in the palm of the hand, and their installation have already been covered by two grants.

Prayers and a Potential Memorial for Special Ladies

At the request of Rep. Tom Marino’s office, the commissioners agreed to send a letter of support for the renaming of the Laceyville Post Office in honor of the late Melinda “Mindy” Piccotti, co-owner of Ringneck Ridge hunting camp and the founder of Hunts for Healing. “We hope that other people carry on her great commitment to veterans,” said Mead.

The commissioners also expressed hope that former county commissioner Charlotte Montross Hadsall will pull through hip surgery planned for Tuesday afternoon. According to her granddaughter, Lori Bennett, Charlotte was the first woman appointed to the board of commissioners when her husband, Emerson Montross, was unable to complete his term in the early 1970s. Cahrlotte’s 100th birthday is Oct. 1.

“She’s one of the feistiest women I know,” said Henry.

In a short meeting of the Wyoming County Prison Board held before the regular meeting, Warden Ken Repsher, noted that things have been relatively quiet at the facility in Tunkhannock. Nonetheless, there has been an uptick in the number of female prisoners, requiring seven of 22 women in the system to be housed at other facilities. There are also two men at other jails. More than $50,000 has been spent on prison outsourcing so far this year. An over increase of eight inmates was attributed largely to drug crimes.

There was no action taken in an executive session that involved a personnel matter.

The next meeting of the Wyoming County Commissioners is slated for Tuesday, July 10 at 9 am at the courthouse in Tunkhannock. The Prison Board is scheduled to meet again on Tuesday, July 24. Both meetings are open to the public.