Energy Panel Advocates New Round of Education in PA 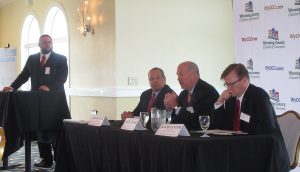 Three energy experts with varying perspectives on how to best move the natural gas industry forward in Pennsylvania and the nation spoke to a packed house at Stonehedge Country Club in Wyoming County on June 21. The Think About Energy conference was hosted by the Wyoming County Chamber of Commerce in partnership with the Back Mountain, Greater Wilkes-Barre and Greater Scranton chambers.

The event was sponsored by Cabot Oil & Gas, whose Bill desRosiers started the meeting by explaining the goal of the event as “putting an effort into helping people understand what energy means.” 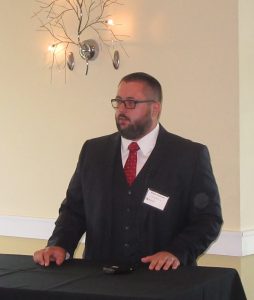 Recurring themes during the two-hour event included the fact that energy production impacts everyone everyday, the sentiment that the public and politicians need a refresher course in the value and the value-added of energy production, and that what is happening in energy in Pennsylvania right now affects the country and the world more than ever before. They called on those living in energy producing counties to help them tell the story of how natural gas production has positively transformed the region.

“You are intimately familiar with this,” said Gene Barr, president and CEO of the PA Chamber of Business & Industry. “You live it every day.”

“It’s easier to explain it here where people can see it,” desRosiers agreed, noting that the concept is a harder sell in counties where there is no energy production.

PA Manufacturers Association president & CEO David Taylor told the crowd, “You want the jobs, the growth, and the dynamism for quality of life,” adding that he sees a vibrancy in towns like Tunkhannock that he doesn’t see in his hometown of Huntingdon. “It is changing our standing on the world stage.”

Taylor cited resistance against infrastructure development across the Commonwealth and threats of new taxes for preventing the rest of the state from reaping the benefits.

From a national perspective, American Energy Alliance & Institute for Energy Research president Thomas Pyle feels that the Trump administration has made some positive policy changes, including repealing regulations on extraction and the use of fossil fuels that were imposed by previous administrations.

“We support the principles of a free market,” Pyle stated. “We don’t believe that the government should be in the business of picking winners and losers. And Pennsylvania is well-positioned to be an economic force in the years to come, as long as effective policies remain in place. We are in the midst of a bonafide energy renaissance.”

Panel members agreed that they face stiff competition every day from environmental lobbyists, whom they contend are using money from peculiar sources to fund a campaign of disinformation that leads to economic illiteracy. They share a disappointment that New York and the New England states have wiped fossil fuels off their slate without an eye on the future.

As a result of fighting the pipelines that would deliver natural gas, “in just a few years, their facilities will be unable to meet demand during cold weather,” Pyle explained. New England states have already resorted to purchasing gas from a Russian company operating in the Arctic Circle that was delivered under the French flag to avoid the sanctions placed on Russia, whom Pyle and Barr singled out as a key supporter of anti-fossil fuel campaigns in America.

“Environmental organizations have billions of dollars to spend with one purpose: to stop the production of fossil fuels and the distribution,” Pyle responded. “They are very good at creating narratives, and the media has latched on to those narratives. It’s an outrage. I wish we had the money to fight it.”

Panel members expressed dismay as well at anti-energy rhetoric in many campaign commercials for the November elections. Taylor took issue with references by environmentalists that energy production is “dirty,” while maintaining that the industry is “ahead of the pack” in improving efficiency and reducing emissions. “The only way to have zero emissions is to have zero industry,” Taylor asserted. “And that has consequences too – no jobs.”

“Natural gas does not have to be here,” Barr stated, referencing both the efforts of environmentalists and the threat of a severance tax by Gov. Tom Wolf. “Capital is liquid. It follows the path of least resistance and can go to competing states. Let’s not kill the ‘golden goose’ before the eggs get here.”

Owing to what the panel members see as economic benefits for everyone in the state, all three disputed claims by political opponents pushing for a severance tax who say repeatedly that Pennsylvania is the only state not to tax gas extraction. In addition to corporate taxes that are relatively high compared to other states, Taylor countered, “Pennsylvania is the only state with an impact fee.”

The same day as the conference, in fact, the PA PUC announced that $209 million in impact fees had been collected in 2017, nearly $45 million more than in 2016.

The conference ended on a positive note, with each panelist offering his vision of the future of energy production. In addition to winning over the public and politicians to the benefits of responsible development, Taylor and Barr agreed on the importance of finding the proper balance between domestic use and exports.

“We have a real choice here,” said Barr. “We need to figure out how we can better utilize the energy here to our benefit, as well as export to help those in other countries have a better standard of living.”

“The exports are a means to the end,” Taylor suggested. “I view exports as being the jump start to increasing production and to use these resources domestically to power our economy. There’s plenty to go around.”

“When you export energy, you export freedom. If we can maintain control at the federal level, I think we will meet those demands,” Pyle concurred. “The sky is the limit. The impediments are political.”

Wyoming County Chamber of Commerce president Gina Suydam estimates that more than 120 business professionals participated in the event. “The event opened the eyes of many throughout the region about the magnitude of natural gas resources right here in northeast Pennsylvania. The Marcellus shale is vital to the United States’ energy independence. Our advocacy is important to the growth and sustainability of our regional, state and national economies.” 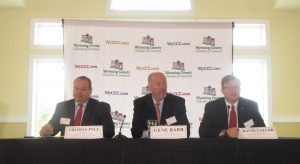