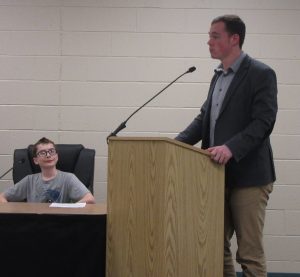 While the agenda for the Feb. 12 public meeting of the Wyalusing Area School Board was not particularly lofty, a number of transitions and transactions in the school system were noted, including updates to the district’s special education and lunch charges policies, the retirement of 31-year consumer sciences teacher Loretta Stevens, the acknowledgment of a briefly–furloughed teacher’s tenure, and a generous offer by a fellow basketball coach.

Improvements to the Community Board Room in which the monthly meetings are held were immediately noticeable on Monday evening. New state and American flags, mission and vision statement placards and seven “shared values” adorned the walls behind the seated board members. Superintendent Jason Bottiglieri referred to the enhancements as a continuance of creating a professional value to the room for all who use it.

High school student representative Jon Morrison was quick to notice that new microphones had been installed in front of him and elementary school representative Jacob Marcion. Subsequent to his report, Morrison was congratulated by Bottiglieri for surpassing the 1,000–point milestone in his basketball career at the school. Board member Gene Anne Woodruff commended Marcion on the perfect elocution of his report. 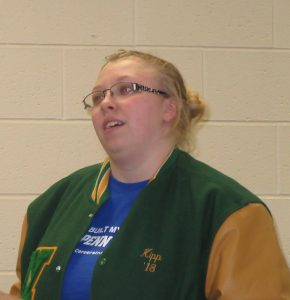 Bottiglieri presented WVHS seniors Leann Kipp (above) and Brandon Brown (below) with citations for their performance at the recent SkillsUSA competition at Williamsport, in which they competed with three other Wyalusing students who attend the Northern Tier Career Center. Brown related that he relied on his math skills to take first place among nine students in an electrical challenge, and Kipp stated, “It was really nice to see my fellow (NTCC) classmates compete.” 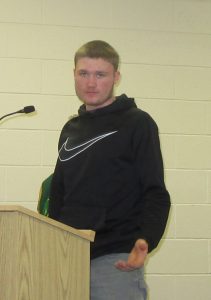 Bottiglieri also announced that WASD had received two certificates of excellence from the United Way of Bradford County, including Largest School Campaign for 2017.

Under Finances and Budget, the board unanimously approved the transfer of $80,000 from the general fund to the capital fund that, when added to the $125,000 realized from the recent sale of the former administration building on Main Street, will sure up an account that was depleted by the move of administration to the elementary school building and securing the front of the high school building.

“That was the intent all along,” Bottiglieri explained. The shuffle leaves the district with more than $200,000 on hand for future capital improvements and purchases.

The calendar for the 2018-19 school year was tentatively approved, with school starting on Monday, Aug. 27 and the last day scheduled for Monday, June 3, 2019, pending the number of bad weather days. The biggest change came on the heals of a report from the Curriculum, Instruction and Technology Committee by board member Joe McMahon.

In recent years, the district has scheduled seven Act 80 days, permitted by the state to allow for professional development of faculty. McMahon noted that committee members felt that the two-hour delay for arrival of students on those days was not enough time for teachers to accomplish much in workshops and brief seminars on a variety of topics. Next year’s calendar will have four Act 80 days with three-hour delays.

“This will also mean fewer days for parents to make arrangements,” Bottiglieri noted, adding that the change is an experiment. “We will try it. We can always make adjustments.” The new calendar also better mirrors that of the NTCC, he added.

An update in lunch charges policy is also underway following suggestions from the state. “The government came out with new standards to ensure that students were not being embarrassed nor harassed by school district officials for balances that may have been on their lunch tab,” Bottiglieri explained. In the future, parents and guardians, rather than the students themselves, will be notified if a student is five days or more beyond his or her lunch budget.

Two basketball coaches – Clarence “Hopper” Moss and Brent Keyes – were highlighted in the course of the meeting for separate reasons.

Moss had asked that his $1,814 salary for services as 3rd assistant boys basketball coach be donated in equal amounts to the Boys Basketball and Baseball booster clubs. Board member Doug Eberlin (third from left, above) remarked that Moss’s gesture was consistent with his history of volunteerism with the district, and Woodruff (third from right, below) added that Moss is indicative of the value of retired individuals to the district.

Keyes was featured in a brief video shown during the meeting of a post-game internet interview by WVHS senior Anthony Roberts after Wyalusing’s recent one point victory over Troy. Keyes was laid off from his teaching position at the high school in June 2016 and hired back as an elementary teacher the following December. The board was happy to announce that he had reached the three years needed to secure his tenure.

Woodruff noted that the furlough of Keyes was one of the most difficult votes she and fellow board members had cast in recent years and it was a relief to have him back.

“His heart is in the classroom,” WVES principal Deneen Lance concurred. “He builds relationships.”

Also featured in the video was WVHS senior Kasar Cameron, who scored the winning basket in the Troy game at the buzzer. Bottiglieri remarked at how special it must have been for Kasar’s mother, Kenya, to see the shot from Korea, where she is stationed with the military. Kasar fought back tears at Anthony’s reference to the internet broadcast and responded that he surely would have preferred that Kenya had been there to see it in person.