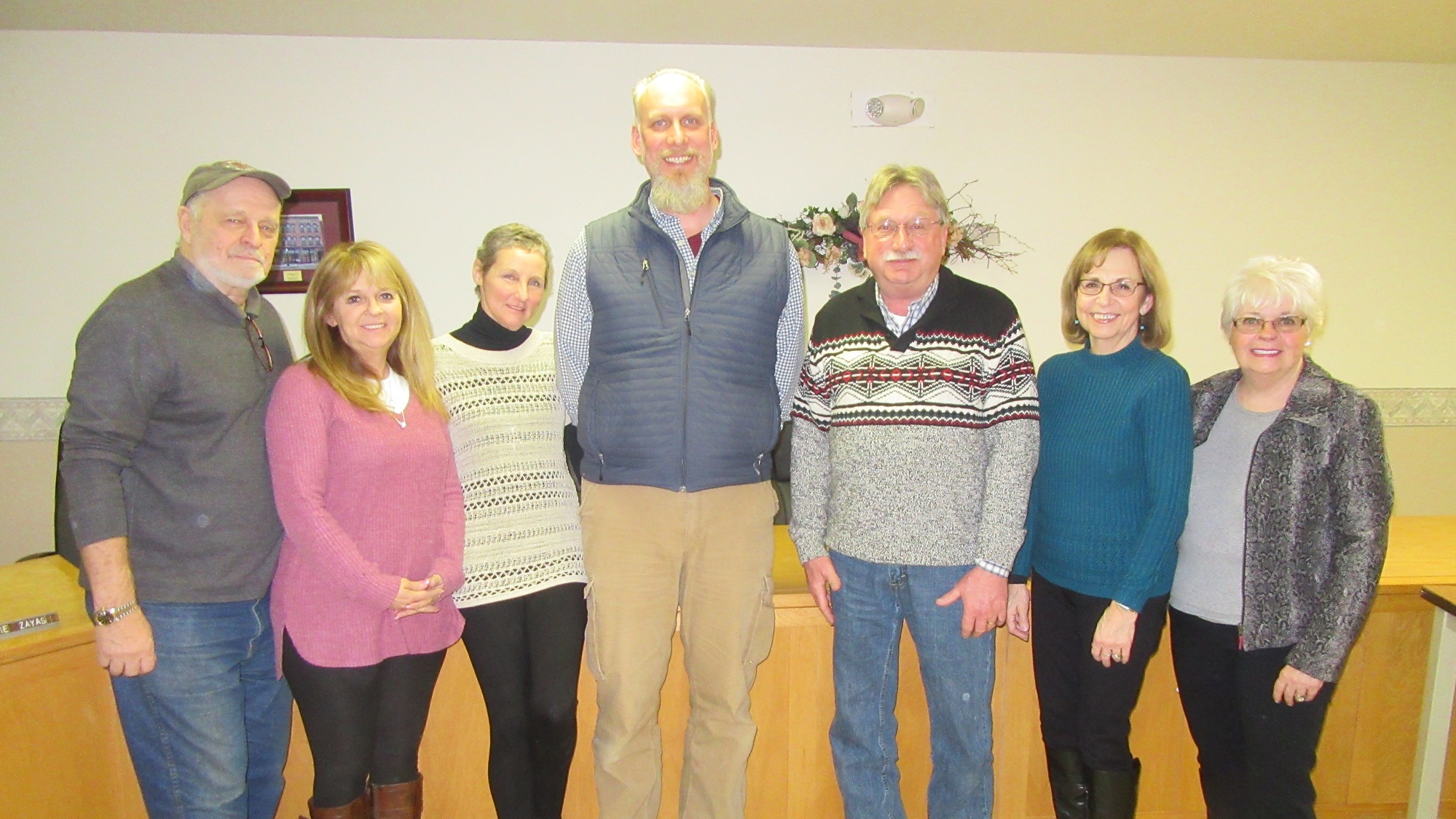 Dana Rockwell (above, center) addressed a variety of community and heritage organization leaders on Monday evening about his ideas of developing a heritage corridor in the area of Susquehanna Depot, Lanesboro and Oakland by combining historical and natural assets. The presentation preceded a meeting of the Susquehanna Community Development Associations, member of which who were in attendance included (from left) John Sholtiss, Theresa Felter, Margaret Biegert, Joe White, Darlene Slocum, and Marie Curtis.

(As published in the Jan. 31 edition of the Susquehanna County Independent)

Members of the Susquehanna Community Development Association (SCDA) hosted a presentation by avid outdoorsman and history buff Dana Rockwell on Monday evening that offered a basic interpretation of how Susquehanna Depot’s historic and recreational assets could be tied together as a package. With proper support and leverage, Rockwell maintained, the Susquehanna Depot Heritage Area, as he calls it, could draw visitors and revitalize the town.

“I’m tired of hearing that there’s nothing to do here,” said Rockwell, who also serves as a Susquehanna Borough councilman and fills his spare time with hiking, kayaking and promoting the river and local trails.

His digital presentation made it clear to attendees, including county commissioners Betsy Arnold and Alan Hall and Endless Mountains Heritage Region (EMHR) director Annette Schultz and board member Kerry Foose that the combined history of Susquehanna Depot, Lanesboro and Oakland and their situation at the crossroads of the D&H Rail Trail and Susquehanna River Water Trail make them a viable destination and focus for grants.

“Dana has such a vision and passion for his community and the river,” said Arnold, who met and kayaked with Rockwell last summer. “He is adamant about cleaning up the river and the surrounding environment.”

Some of the pinpoints on Rockwell’s preliminary map represent established venues, some are under development, and others have the potential to be developed. Among those already recognized as heritage destinations by EMHR, in addition to the water and rail trails, are the Starrucca Viaduct and the LDS Priesthood Restoration Site. Great gains were made last year on the new Ira Reynolds Riverfront Park, which Rockwell sees as pivotal to the rest of the project.

“That river side park should be a huge asset to the community,” Arnold concurred, adding that she was excited to learn that there might be live music events in the park as early as this coming summer. “They seem to have people who really care and respect the heritage areas and are willing to work together to revitalize their town.”

Rockwell noted that the borough office, in which the Jan. 29 meeting was held, is at the center of the former roundhouse that was part of the historic Erie Railroad infrastructure that gave cause to the town. Prior to 1848, he noted, there was essentially one farm where Susquehanna Depot now sits. Rockwell envisions interpretive displays and signage to capture and preserve those moments in history. Nearby Brandt Gorge and State Game Lands #35 also have potential for enhancements as destinations.

“This is exactly the kind of big-picture thinking that supports the region’s heritage and natural assets to make a place welcoming for visitors,” Schultz remarked afterward. “There’s a lot of potential because of the nexus of regionally based features there. They have a bundle of attractions and should be concentrating on that as part of an economic development plan.”

Rockwell realizes that the entire concept would take some time to develop but wants to take the momentum created by the park project and built upon it. He cited obstacles such as limited public access and signage, as well as a river dam that was breached about a decade ago and poses a serious threat to anyone who is not aware of the large hole in it. Its removal at this point would do little to change the flow of the river, he suggested.

A group was formed some years ago to restore the dam, which once generated power, but the general consensus of those in attendance is that the 1929 structure, last renovated in 1980s, is now beyond repair. Rockwell said that he has been looking into a federal agency that dismantles old dams and spillways. Commissioner Alan Hall suggested that the Pennsylvania Fish & Boat Commission might also have an interest in its demolition.

“I would think that the liability alone would be reason to dismantle it,” Rockwell remarked. The result, he noted, would be a 50 mile stretch of the river with no need to portage, including 15 in Susquehanna County.

In the meantime, Schultz interjected, EMHR might be able to secure some funds to place signage above the dam alerting boaters of the danger ahead. Schultz also told Rockwell that there are initiatives underway in nearby Wyoming and Sullivan counties to develop trail networks and suggested that he monitor their progress.

“I think this needs to start with locals to know and appreciate what we have here,” Rockwell stated, to which SCDA board member Margaret Biegert made the point that students should be involved from the earliest stages of project development.

Noting that the average age of those in attendance was over 50, no one could argue that engaging young people and providing them a sense of ownership of the project would be necessary for its long term viability. Biegert also recommended starting with a brochure to define the scope of the project. Another audience member suggested that a brochure can serve as a rather inexpensive catalyst for additional funding.

Many of the photos that Rockwell used in his presentation were from his own collection and showed that he finds beauty in the Susquehanna area in all seasons. Most of the historic photos used were from the collection of Rockwell’s friend and fellow hiker, Jon Burdick. Both encouraged those in attendance to follow them and groups like Friends of Starrucca Creek on Facebook to coordinate local hikes and stay abreast of their progress with the Susquehanna Depot Heritage Area project.