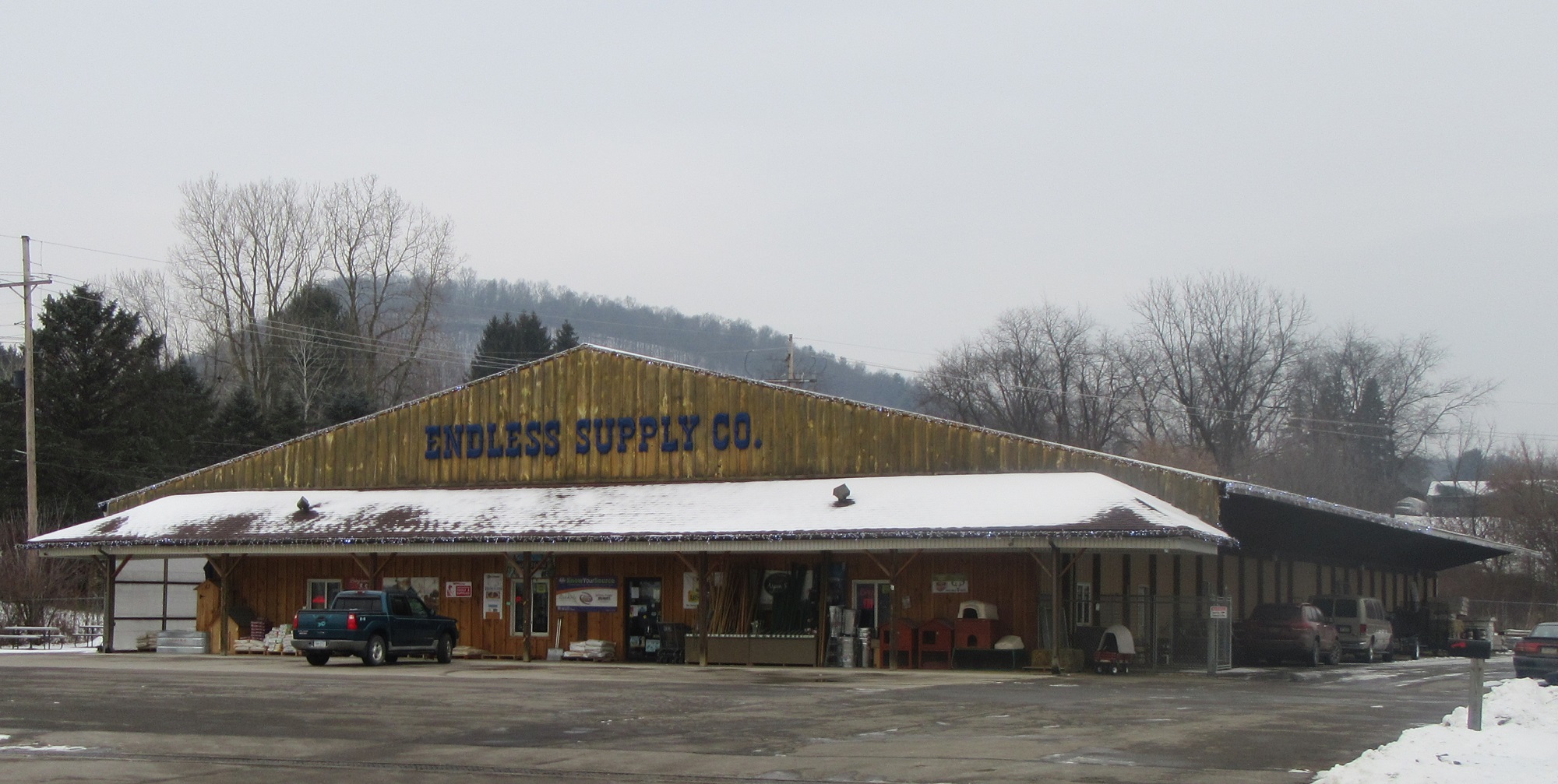 On the evening of Jan. 26, 2018, Endless Supply suffered a tragic fire that resulted in a near total loss of its animals and other stock. The following story was composed for www.wysoxtownship.org after a December 2017 interview of the owner and was slated for publication this week, pending release of a staff photograph.

With all due respect to those directly affected by the loss, we are publishing the story to remind the citizens of Wysox Township and beyond what a wonderful addition to our community Endless Supply was and how devoted the owners and the employees of the business are to the welfare of both animals and people.

When Melissa and Dale Vanderpool opened Endless Supply on April 1, 2013, they knew that they were embarking on an enterprise that would stand out in Wysox Township as something truly different. The family’s love of animals and the difficulties they had at keeping necessities close at hand were the catalysts for a business that would come to help many others.

“I was getting tired of running to Sayre for everything that I needed,” Melissa said in a December 2017 interview as to maintaining a steady stock of feed and other supplies for the family’s farm. They had nearly 60 animals at their Wyalusing-area homestead, including horses, goats, chickens, cats, dogs, and alpacas.

Dale is in the excavating business and builds trailers. “If he needed a special nut or bolt, he had to go to Wilkes-Barre,” Melissa noted.

Locally, they turned to Billy Kolbeck and Vicki Cendrowski, owners of Billy’s Pets in Wysox Township, for basic needs and a budding friendship that grew into a professional relationship. The Vanderpools made a deal with Kolbeck and Cendrowski to purchase their inventory and start a new business. They added farm supplies, feeds, and expanded the selection of dog and cat foods.

“If people ask for a different kind of food, we can usually get it,” Melissa remarked.

Luckily for all, Bill and Vicki went along for the ride, continuing their pet grooming services at the new location at 1195 Golden Mile Road. They joined Dale and Melissa, their teenage daughters Sarah and Brianna, niece Erica Potuck, and a handful of others and helped in the cross-training of employees.

“Everybody pitches in and does a little bit of everything,” Melissa said of Endless Supply’s all-hands-on-deck approach. The company now employees about a dozen people, and Potuck became a full-time manager about three years ago.

Soon after it opened, regular customers could see the store filling out its available space. Plumbing supplies became available, as did trailer parts like breaks and hitches. 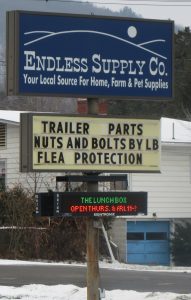 “We keep expanding our inventory as we go,” said Melissa, who indicated that the family would like to add boots, work shoes, and recreational apparel in the coming year.

But it is no doubt the growing array of critters that keep Endless Supply patrons coming back. “We have a very good customer base. We have a lot of families who come in to window shop and look at the animals,” Melissa related. “They see the other things we carry, and they become customers.”

The Vanderpools and their employees are not only well-versed in animal husbandry, they have a compassion for all living things that has endeared them to the community. In addition to carefully purchasing animals for resale in the store, Melissa became an avid rescuer by default.

People who had bought pets elsewhere on a whim were coming to her with animals they no longer wanted, for which they could not provide proper habitat, or with which they simply couldn’t bond. This is indicative, Melissa noted, of an alarming misunderstanding among the general public of what pet ownership is all about.

“You have to work with a pet. You have to make it part of your family. You can’t just tie it to a tree or throw it in a kennel and expect it to learn things,” she asserted. While dogs seem to tug at her heart strings more than any other species, Melissa cited exotic birds as one of the most misinterpreted animals, and she has taken many into the shop and to her home.

“Birds are high maintenance. They can be expensive, and they can bite,” she explained. Nonetheless, like Dr. Doolittle, Melissa and her long-time employees can reach into most of the bird cages and pull out a feathered friend who will perch calmly on their hand or shoulder. “I like to know that the people have a lot of bird knowledge and make sure they know how to take care of them,” Melissa added.

Animals are surrendered for a variety of reasons, of course. Often, the owner went into a new living situation and could not take the pet. Sometimes a new animal was not as welcome an addition to the family or household as had been hoped.

Whatever the reason, Melissa works to find a suitable arrangement through foster care or new adoption. And, whatever the breed, properly educating people on what to expect from their purchase or adoption is as important to the Vanderpools as is finding a new, loving home for each animal. “We discuss the care involved with each animal we sell or adopt out,” she stated.

Ferrets, for example, can be extremely affectionate and will often get along well with other animals. And, even though they can usually be litter trained, they have peculiar scent that isn’t appreciated by everyone.

Melissa related the story of a mother whose children were quite taken by the slinky, curious critters. “She said, ‘I can’t believe they are so clean,’” Melissa recalled. I told her, “We clean our cages every day. Ferrets do smell.”

As Melissa puts it, she helps work animals through the “issues” that brought them under her care. One of the most important policies for surrendered animals is “Call first.” She wants to fully understand the circumstances and usually has to make room for new commitments.

Once they arrive, she concentrates on the animal’s health. If they are not up to date with shots, they go to the vet. After 15 weeks, every new dog in the shop has a rabies shot. Melissa also won’t let an animal go from the shop unless she feels that it is going to a better place. Nonetheless, pairing up pets with people who will truly love them is more important that profiting from the venture.

“If I have no money invested,” Melissa said, “I’ll adopt it out for free. If I have to take it to the vet, I pass on that cost.”

Patrons to Endless Supply will notice “not for sale” signs on the cages and tanks of some animals. Some of them are simply at home in the shop, and others are taken out by Billy as a mobile petting zoo to at least four personal care homes in the area.

The importance of people relating to animals is ingrained in all of the employees and has proven therapeutic for the senior citizens who are visited by Billy and his traveling companions and also for clients of Career Link with intellectual disabilities whom the Vanderpools have hired over the years.

Melissa cited Cole Fowler, who started as a volunteer at both Billy’s Pets and Endless Supply, as a great example of a now popular employee hired through the program. Cole can routinely be seen walking the animals, sweeping the floors, and carrying purchases out to the parking lot for customers.

Whether it’s a beagle, macaw, tarantula, calico cat, beta fish, guinea pig, boa constrictor, boxer, scorpion, parakeet, hamster or pet rat you want, Endless Supply probably has it in stock or can get it. They also have feeder rats and mice for snake owners. For more information, follow Endless Supply Company on Facebook or call 570-265-7387.

On Jan. 28, two days after the tragic fire, Melissa Vanderpool posted the following message to the community on Facebook, giving hope to many that the family and employees will rebuild when the time is right:

“I don’t even know what to say or how to feel at this point. But I want to take the time to thank everybody for all the positive comments and all the support people have shown. My employees friends and family have been amazing I love you all. I have no clue what’s going to happen now because I’ve never dealt with anything like this but my hope would be to rebuild. The store was my life. I along with my employees are devastated that the pets couldn’t be saved but the fire was horrific. Once again THANK YOU for all your support.” 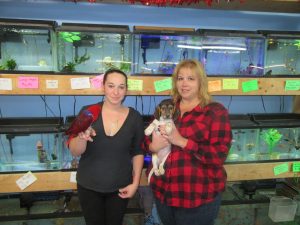 Nikki Jennings (above, left) of Towanda was one of several employees and volunteers from the former Billy’s Pets to make the transition to Endless Supply Company when Melissa Vanderpool (right) and her husband Dale opened the new business in 2013.