Clandestine Crew Guards Secrets of Winter Angling at the Eddy 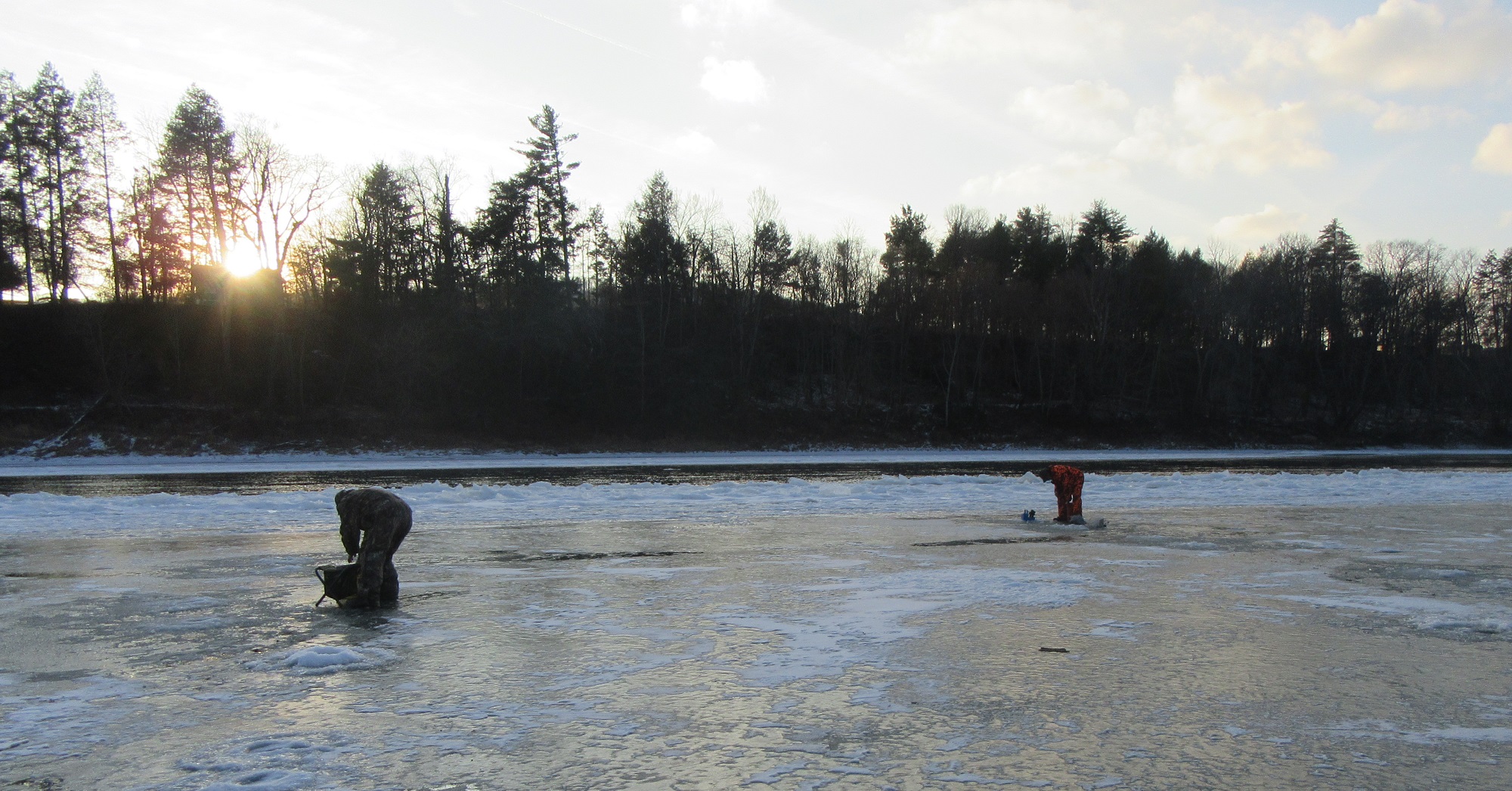 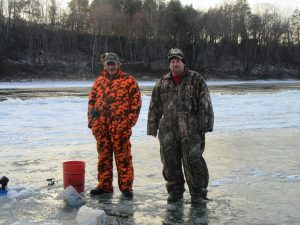 Setting up for a sunset fish at Skinners Eddy but divulging no secrets on Tuesday were Hank Belcher (above, left) of Leraysville and Richard “Banjo” Voda of Spring Hill.

(As published in the Jan. 11 edition of the Rocket-Courier)

Ice fishing at Skinners Eddy has been a staple winter sport for area residents for hundreds of years and is hardly a secret. As one drives west on Route 6 along the river just east of the village in Wyoming County, the anglers on a frozen stretch of slackwater are readily apparent. But regulars to The Shelf, who can number in the dozens on a good day, prefer to keep their little niche of the Susquehanna River to themselves.

Longtime fishing buddies Big John from Tunkhannock and Kern from South Auburn are reluctant to provide their last names but find it difficult not to let a few good fish tales slip through the cracks of their weather-hardened exteriors, especially when they gather for breakfast at Christy’s Country Kitchen in Black Walnut. They joke that they often do not even let each other know when they land a whopper, especially if they are inside their portable shelters.

Most importantly, John and Kern agree, river ice fishing isn’t for everyone. Not only is the fishing the best when most people would rather be indoors, the conditions that make the shelf perfect for fishing one moment can change in a matter of minutes. Mild and sunny days are not as big a culprit as is rain, which can swell the river and push up the ice from underneath.

John remembers a day that he was fishing with a friend and their tippets – small flags attached to the baited lines hanging beneath the ice – all began to spring at once. “Something’s not right here,” John said to his friend. “Let’s get off the ice.” They drove to Wyalusing for a bite to eat and then back to the Eddy. The entire shelf had crumbled and disappeared in the short time they were gone due to the release of an ice flow upstream.

While ice fishing and hunting were literally a matter of survival a hundred years ago, the men and women who continue to brave the river ice do so with necessary trepidation. Using an ages-old formula of ice thickness per angler, they generally add another inch to the equation at Skinners Eddy to accommodate the variables.

Kern learned the hard way that the “four-inches is safe for one fisherman plus gear” rule is especially risky along the river. He measured four inches when he dug a hole to fish an ice shelf along Mayo Beach near Meshoppen one day but fell through a thin spot nearby.

“I went under the ice and looked up,” Kern recalled. “The only thing that saved me was that there was not much of a current, and I was wearing a puffy jacket that brought me back to the surface. I was damn near frozen by the time I got to my truck.”

On December 8, 1908, Elbe Woodruff fell through the ice at Skinners Eddy in an attempt to walk across the river just before dusk at a time when the ferries were not running and the five cents per person toll at the Laceyville river bridge was too high for the common citizen.

According to a story published in the Scranton Republican on Dec. 10, all that was found that evening was Elbe’s woolen mitten. Though his body was not immediately recovered, a death certificate for Elbe was issued on Dec. 10 based on eye-witness accounts of his demise.

John admits that a number of ice fishers have had minor incidents at the river. Kern noted that ice along the shoreline at Skinners Eddy is often mushy or thin. It’s not uncommon to pop through the slush getting onto or off of the shelf and end up with a cold, wet boot.

While not scientifically based, those who fish the river in the winter believe the water to be cleaner than summer months and the fish therefore safer for consumption. Kern also says that winter is the best time to get walleyes, but true sportsmen drop the “trophy fish” back into the hole after they get a photo. “What most of us practice is to let go anything over 20 inches,” Kern relates. “If you take all of the big females out, there will be nothing left to reproduce.”

He has reeled in a couple of walleyes over the years at 30 inches or better, and he’s seen other anglers pull up a dozen or more channel cats in a single outing. It’s also not uncommon to bring in a good-sized musky of 40 inches or more, but Kern considers spring and summer to be better musky fishing weather. Carp are considered inedible and are often left on the ice for the eagles.

As of Monday, most anglers on The Shelf were reporting about eight inches of ice as compared to a foot or more on ponds in the higher plateaus of nearby Bradford and Susquehanna counties. While no heavy rain is predicted, the highs in Laceyville on Thursday and Friday will likely be in the upper 40s with showers possible on Wednesday and Friday. Freezing temperatures should return by the weekend, keeping the ice shelf relatively stable for the time being.