Kovacs Succeed by Taking Chances With an Eye on the Future

COS Wireless is the current name of a family venture started by Chuck (above, right) and Karen (center) Kovacs in 1978 as County Office Supply. Son, Charles (left) has been part of the staff for many years and currently services as the IT specialist for the business, which has been at its present location on Route 6 (The Golden Mile) in Wysox since 1979.

Unlike the majority of families and business leaders so far profiled at WysoxTownship.org, Chuck Kovacs is one of the Township’s best examples of someone successfully bringing new ideas to the area to integrate with standard business practices to engage customers and support the local economy.

Having invested in numerous business ventures in Wysox and beyond, Chuck and his wife, Karen, are known today for providing wireless communication services and products and a myriad of related services through COS Wireless on The Golden Mile that are geared to both businesses and residential customers.

Most importantly, Chuck smiles in the face of adversity and takes on all that life throws at him with a sense of humor. A post-WWII immigrant, he takes the American “pursuit of happiness” to heart. Happiness, Chuck explains, is a virtue bordering on philosophy and theology. “Happiness is not a destination,” he insists. “It’s a mode of traveling.”

Born in Budapest, Hungary in 1944, Chuck Kovacs’ family escaped the Hungarian Revolution of 1956, literally stealing away into the darkness one night with some of the country’s best engineers and artisans to avoid Communist rule and oppression. Even as he recants the arduous journey by the group across snowy farm fields and half-frozen streams to safety in Austria, Chuck makes small jokes about being deprived of both food and sleep.

“The adults didn’t pack wine or beer,” he adds. “No wonder they were grumpy.”

Though sponsors were awaiting the arrival of the group in Argentina, the Kovacs family was instead sent to America, where they were received into a refugee camp for displaced Hungarians in Phoenixville, PA. Chuck laughs about his struggles to understand English as he entered the sixth grade in Phoenixville a semester late and the folly of joining a “football” game during recess, only to find out that the American game bore little resemblance to the “futball” Chuck had played in Europe.

Chuck admits that boredom stalled his graduation from Phoenixville High School. The following year, he picked up the two-tenths of a credit he lacked for his diploma and was promptly drafted into the Army, where he was lucky enough to become a desk clerk in Vietnam because he could type. After his discharge, he attended Goldy Beacon College in Wilmington, DE, where he met his future wife, Karen, in an accounting class.

“Love at first sight is a good sign for attraction,” Chuck has written in his nascent memoirs. “She supported me, and I supported her.” Their late night phone calls were less about their amorous intentions than they were about law, accounting, taxes, and getting good grades.

Garnering associate degrees at Goldy Beacon was just another stepping stone on their continuing quest for knowledge and additional degrees and certifications.

It was paper and paper products that brought Chuck and Karen Kovacs to the Wysox area from Pittsfield, MA in 1974. Chuck’s experience in paper milling products with the Kimberly Clark Corp made him a viable candidate for a management position at the Masonite plant, and he and Karen took quickly to Wysox and its residents.

“The small town atmosphere of the area appealed to me immediately,” Chuck recalls. Nonetheless, he explained, he preferred working with Kimberly Clark’s dry paper process over Masonite’s wet paper milling. By 1977, he was restless and confident that he could achieve more in the area.

One day, he stopped into Lundy Office Supply at the intersection of Routes 6 and 187 to purchase a refill for a pen and met Dottie Schoonover behind the counter. After running the business for more than 30 years, store owner Nelson Lundy had passed away in 1976 and Dottie, formerly a sales associate, was more or less managing the business. Chuck sensed that she was a bit overwhelmed, and the gears in his head were already turning as he left the store.

He put together a business plan and took it to Bob Dickerson at Citizens & Northern Bank. It was not an easy sell, Chuck remembers, but he finally secured the financing that allowed him and Karen to take over the business and change the name to County Office Supply, where Dottie worked for another year. Bob Dickerson remained close friends with the Kovacs through Dickerson’s death in August 2015.

The first thing that they had to accomplish, Chuck noted, was to start turning the inventory over faster. Within a few years, he had sped up the process from what had been a three-year inventory turnover to putting new merchandise through the store every three months. Within six months, the Kovacs had four stores, including in Troy and Tunkhannock.

The rapid expansion during a weak economy proved too costly, however, and the Kovacs began selling off the newer stores. “It was too much too soon,” Chuck noted. It was an important lesson in dynamic equilibrium, which Chuck explains as striking the perfect balance between “how fast you move forward and maintaining your intra-organization.”

In 1978, the Kovacs moved to their current location at 324 Golden Mile Road, purchasing what had previously been a motorcycle shop. A stroke of luck that would lead to many similar relationships with technology franchisers was that Xerox was looking for representation in the Towanda/Wysox area. The Kovacs retained the Xerox franchise for the next 12 years, as they continued to diversify in directions that sometimes defied conventional wisdom.

At various times, they have operated a dry cleaning business and one-hour photo shop in the same building. The former seemed to Chuck at the time to be a natural extension of services to the business community, in particular people who wore and needed clean suit clothes.

“It was a fatal mistake. We misread the demand for dry cleaning,” Chuck explains. “The economics weren’t to scale. It was labor intensive and exacting.”

Everything happens for a reason, Chuck believes, and getting out of the dry cleaning lease provided the opportunity to focus on the massive shift from the mechanical and electronic eras to the burgeoning digital era. He began stocking the first “portable” computers manufactured by Apple, Osborne, and KayPro.

Chuck laughs as he remembers rapid enhances of the memory in the home machines from 360K to 10 MB. “We thought we were in Seventh Heaven.” From there, Chuck explains, the computer industry “just blew up. Every year it was something different.” He and son, Charles, routinely attend trade shows and garner as much knowledge as they can.

(The Kovacs’ other son, Mark is an anesthesiologist with Guthrie Health System. Both sons have a son and daughter, making four Kovacs grandchildren.)

Suddenly, big box Office Supply and Staples stores were popping up and forcing many “mom & pop” suppliers out of business. Chuck recalls being awed by the first Staples store he visited in California. “It was a paradigm shift,” he related. “This new way of selling was going to change our world big time. You realized that you had to step up.”

As such stores began opening in Elmira and Binghamton, NY, the list of products and services offered at County Office Supply took a quantum leap. Supplying the “home office” had become a booming business, as the internet and portable storage made it possible for more people to work from home.

It would not be long before the need to transmit and transfer data more readily would force another revolution in the barely decade-old digital age. “It was a buzz that turned into a giant scream for wireless,” Chuck recalls.

Despite being in its infancy, the Kovacs seized the opportunity to invest in the wireless market and bring the first Verizon franchise to the area.

“The first two years, we had to go to the top of the mountain to program every damn phone from a signal in Scranton,” Chuck explained. “The signal kept coming closer and closer, and the business took off.”

Fully understanding the dynamics of internet services and purchasing from the comfort of home leaves the Kovacs and their staff more determined than ever to continue to provide the personal experience many people are missing by no longer going to stores. “You have to love the customer. He is the king. He is the boss. Provide him with top notch support,” says Chuck.

It helps too to offer services that are not readily available on line such as dye sublimation, the process of burning photographic images into stone. Photograph reclamation and canvas printing are also among offshoots of the one-hour photo business that continue to be successful for COS because they are not offered anywhere else near Wysox.

Chuck is quick to share his knowledge, which is based largely on his personal experiences and penchant for taking risks, whether it be professionally as a business teacher or with anyone whom he senses might be receptive to his axioms and anecdotes. He has taught classes at Penn State Lackawanna and makes the journey back to his native Budapest for three weeks each year to speak on global business concepts.

While COS Wireless continues to diversify its product line, 71-year old Chuck himself is not interested in slowing down or taking a break. “I have no plans to retire. This is my hobby, and not many are so fortunate to come and go as you please.”

He credits the success of COS to the ability of his family to balance life, business, and that pursuit of happiness he feels everyone deserves.

“Division of responsibility is the key to running a family business,” Chuck maintains, adding with a smile, “When you get home, ‘Yes, Dear’ is the other part of the puzzle.” Chuck refers to Karen, with whom he has been married for 48 years, as “The Boss.” She is in fact the major shareholder in the organization. Chuck is the sales manager, and their son, Charles, is the IT specialist.

As a society, Chuck is concerned that the youth of today tends to have a lackadaisical attitude relative to who’s shoulders they stand upon.

He laments that “the citizenship has become oblivious.” Too many forget “how lucky we are to be here. We know more about the Kardashians than the Preamble to the Constitution.”

Chuck sums up life in general with a loose translation of a tender Hungarian melody called “Szeresuk Egymast Gyerekek”:

Love one another, Be a Friend to everyone you meet

Life will surely pass you by

Love one another, Be a Friend

“You ought to be happy every day. As long as you’re healthy, take advantage of it,” says Chuck. “Time is fleeting. You can’t got back and change anything. And you might not have tomorrow.” 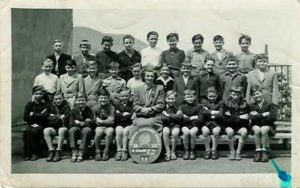 Karcsi (Charles) Kovacs sits next to his teacher in 1956, the last year of school that he attended in Budapest, Hungary before his family fled to the United States via Austria. He has returned to Budapest many times and has been yet unable to locate any of his former classmates. 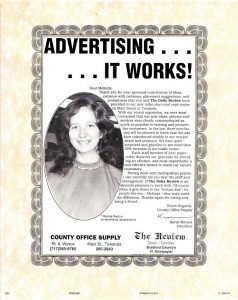 Melinda Raub (above), a former advertising rep at the Daily Review, was honored in this ad featuring a letter written by Karen Kovacs. 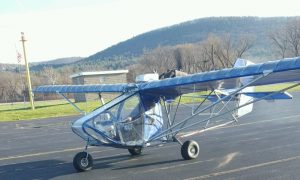 Despite being a well-grounded member of the Wysox Township business community, Chuck Kovacs occasionally likes to take to the air in his self-assembled Tbird (above) or paraplane (below). 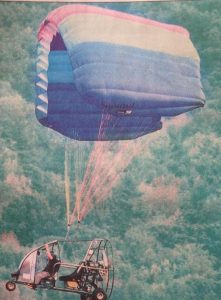 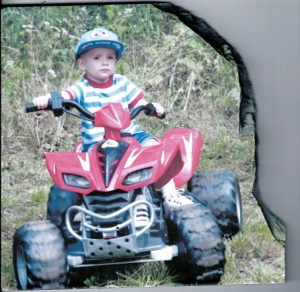 Among the unique services and products currently offered at COS Wireless is dye sublimation of photographs, the literal etching of cherished photographs (above) into stone.