By: Rick Hiduk
In: state government
With: 0 Comments 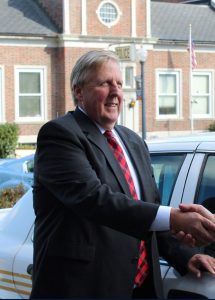 Bradford County Commissioner Doug McLinko announced that he is running for Congress to represent the citizens of the 10th Congressional District.

“We need public servants to step forward and help lead our country out of this mess, and the President needs conservatives he can count on to stand with him in the fight to drain the swamp,” McLinko said. “Look at my record as county commissioner where we cut taxes, eliminated debt, and reduced the size of government. I am a pro-life, Constitutional conservative who will represent our values in Congress.”

Prior to serving as a county commissioner, Doug ran several successful businesses and served as a Wysox Township Supervisor. Wysox Township was one of the lowest taxed municipalities in Pennsylvania when Doug was chairman of the board of supervisors.

Under Doug’s leadership, Bradford County now has one of the lowest county property taxes in the state, no debt, and is recognized with a AAA bond rating.

Doug said he is running for Congress because Washington has become a swamp of corruption, collusion, and cronyism that is hurting working families and senior citizens.

“Our biggest challenge in rural Pennsylvania is the opioid crisis,” McLinko said. “Rather than standing up for his constituents who have been hit hard by this epidemic, Tom Marino made the opioid crisis worse. He solicited campaign contributions from big drug companies and then sponsored a bill that allowed them to flood our communities with opioids. If we are going to win the war on opioids, we need to defeat Tom Marino.”

“I’ve sat in the living rooms of friends and family who have lost loved ones to this tragic addiction,” McLinko said. “I’m a loyal Republican, but after watching the 60 Minutes episode and hearing from families across the district, it is obvious Tom Marino puts the interests of campaign contributors ahead of the health and safety of his constituents. His actions are indefensible. Republicans need to replace Tom Marino before Democrats defeat him in November.”

The referenced 60 Minutes piece can be found at www.DougMcLinko.com.