By: Rick Hiduk
In: Meshoppen, Uncategorized
With: 0 Comments 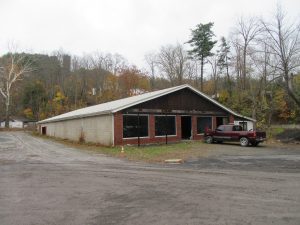 Participating in the Nov. 6 meeting of the Meshoppen Borough Council were (top, from left) Mike Lloyd, Herb Bevan, Jack Vaow, Bruce Marshall, John Bunnell, Phyllis Adams, Christine Swilley, Doris Pickett, Mike Voorhees, and Bruce Pristner. Among items discussed was the potential renovation of the former Noldy Lumber Company building (above), which will undergo a restoration by the Meshoppen Fire Company and could also become the new site for Meshoppen Borough’s offices

(As published in the Rocket-Courier)

The Meshoppen Volunteer Fire Company has approached Meshoppen Borough about the possibility of a co-investment in the restoration of the former Noldy Lumber Company building on Mowry Street, which is owned by the fire company. Preliminary information provided by council member Mike Voorhees at a public meeting on Monday evening suggests that the borough could play a large role in planning the reconfiguration of the space to meet its needs.

The borough currently maintains a year-to-year lease on the space that it rents in a building on Oak Street owned by Lester Puterbaugh, which is historically flood prone. Though bordering Little Meshoppen Creek, the building on Mowry Street was one of few not affected by the 2011 flood. Voorhees and Meshoppen Police chief John Krieg have met with fire chief Chris Carney to talk about a potential layout for the 60-by-100 foot space, which would include a shared meeting room at the center of the building.

“We have a plan in place to utilize part of the building for our needs but have extra space that we offered the borough,” Carney explained after the meeting. “We are just in the beginning stages and have met with a designer.”

The fire company would take out a small loan to purchase materials in hopes of getting the project underway with community support and manpower. The fire company side of the building would include three offices, a garage, bunks and showers for EMTs, work area and crew lounge. The borough would likely have two offices at the opposite end of the building, including one for Krieg. The shared space could also be used as a shelter for severe weather events, Carney noted.

The investment on the part of the borough, early estimates of which range from $10,000 to a little more than $20,000, could pay off in as little as two years with discounted rent until the balance is cleared. The council confirmed an interest in the proposal and asked Voorhees and Krieg to bring more details to the December meeting.

Borough secretary Phyllis Adams distributed draft copies of Meshoppen’s 2018 budget with few changes from last year other than an increase in the borough’s contribution to ambulance coverage. She noted that the borough is already over its projected $522,000 budget for 2017 with two months left in the year. Unexpected expenses included the purchase of a new police cruiser and an extra $3,000 given to the fire company to maintain adequate ambulance service. This year’s overage will be covered with a surplus from 2016.

Nonetheless, council president John Bunnell noted that the increase in ambulance coverage cannot be absorbed without a slight increase in taxes next year. There was disagreement as to how many years it has been since the borough raised taxes, but a 1 mil increase would result in about $45 per taxpayer annually. The discussion was tabled with permission for the budget to be advertised for review prior to anticipated adoption at the Dec. 4 meeting.

Krieg and Mayor Bruce Marshall provided an update on the new Dodge Charger that is being fitted with new cameras, sirens, lights, and radio. Other elements were moved from the 2011 Dodge Charger that has been otherwise stripped. The new cruiser should be on the road within a month, related Krieg, who recommended selling the old car.

“As much as we would use the old one, you would gain more from selling it and getting it off the insurance,” Krieg told the council.

The board agreed to advertise for sealed bids that will be opened at the December meeting. The council has the right to refuse any and all bids.

In another police matter, the Meshoppen Police Department and Krieg, in particular, were commended in a letter from Wyoming County Special Needs director Lori Bennett. The referenced incident occurred on Sept. 21 when calls by a family with a member with intellectual disabilities were not being returned.

“When the department was contacted, Chief of Police John Krieg responded immediately,” Bennett wrote. “Even though the outcome was not a positive one for this family, we appreciate Mr. Krieg’s assistance greatly.”

Council voted unanimously to accept the only bid received for snow removal. At 85 dollars per hour and 110 dollars per truckload of salt and cinders, the proposal from Endless Mountains Landscaping & Excavating was the same as the company had offered in 2016.

Meshoppen Borough may be looking for a new auditor. Lochen and Chase sent a letter notifying officials that the cost for audits for borough business and the sewer and water companies would be rising to $5,000 each per year – an annual overall increase of $3,500. Secretary Phyllis Adams said that she would call other boroughs in the county to find out with whom they contract.

Flood insurance for the borough is also expected to increase by five to 18 percent unless the borough can produce an elevation certificate that proves that its offices are not in the flood plane. Council member Bruce Priestner suggested that the expected cost of $3,000 to do an elevation study that would not likely produce such a finding is not worth the investment. The borough’s flood insurance, which currently covers equipment and a few small buildings in the community park is about $1,500 per year.

Adams reported that she had received no reply yet from Lisa Hahn of the Housing & Redevelopment Authority to another letter from the borough concerning a $15,000 PA DCNR grant promised to the borough long ago for the demolition of the former pizza shop next to Meshoppen Creek.

The replacement of the bridge on Canal Street over Little Meshoppen Creek is near completion, with crews working into the night to have the roadway open to traffic by the weekend. The crew from Walsh Construction removed the keystone from the old bridge, which was picked up by Meshoppen Stone for cleaning, drilling and pinning to be installed as a plaque in a flower bed with a new flagpole in the community park.