By: Rick Hiduk
In: Business Profile
With: 0 Comments 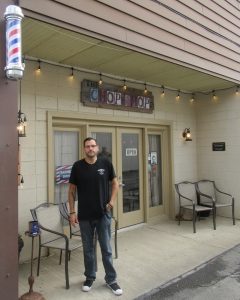 A decorated Air Force medic, registered nurse and former seminary student might seem an unlikely candidate for a barber, but David Pelachik has quickly garnered a devoted customer base by blending the nostalgia of traditional men-only barber shops with a few modern tricks of the trade. Where else can a guy get a precision cut while surfing the net and sipping a complimentary adult beverage?

Pelachik opened the Chop Shop in the alley between Hi-Cal Motorsports and a Jackson-Hewitt tax preparation office along the Golden Mile in Wysox in April and has enjoyed steady customer growth, attracting clientele from all walks of life. His success may come as a surprise to those who saw barber shops closing for years as unisex salons became the rage.

“There is a huge resurgence,” Pelachik says of barbershops. “The barbershop is where the community gathers. If you want to hear the latest gossip, you go to the barbershop.”

Pelachik remembers the barbershops from his childhood as bastions of manliness, and he has worked hard to recreate those sights, sounds and smells. “Growing up in that atmosphere was fascinating to me,” he remarks. Wall hangings in the Chop Shop include old cigarette and liquor ads, framed rock albums, classic barbershop ephemera and modern pieces that might be described as “thinking man’s art.”

As one would expect of a well-rounded barber, Pelachik is well versed in most sports and teams. He earned his nursing certificate at Penn State and his pride of his alma mater is evident when he talks sports with his customers. His oldest son, Josh, is studying engineering at Penn State, and Pelachik’s younger son, Joel, is interested in sports announcing.

Pelachik supports the interests of his boys but knows that what his sons start out to do might not parlay into lifelong careers. The first chosen vocation for this 1992 Athens High School graduate was the priesthood. Pelachick remembers that his father was disappointed when his son quit the seminary and told him that he had four choices left: Army, Air Force, Navy or Marines.

Pelachik chose the Air Force and spent 10 years as a medic in remote locations like the far Pacific that often had little or no medical facilities when he arrived. On Truck Island in particular, the provincial government determined that Pelachik had the highest medical credentials and declared him a “doctor” for approximately 400 civilians living near the base.

He received 15 medals during the course of his military career and, though some seem more prestigious, Pelachik is proudest of his Air Force Achievement Award.

Upon his own return to civilian life, he enrolled at Penn State, where he stood out as the “old man on campus” due to the discipline he brought to his education. After 10 years as a per diem nurse and two years working at a local doctor’s office, Pelachik knew he’d had enough of nursing and the medical profession.

“Sometimes, after 20 years doing the same kind of work, you need a change of career,” he explains. He began an apprenticeship with Jimmy Vanderpool, who continues to cut hair at Clipper Jim’s Barbershop at the other end of the strip. He also cut hair at the Bradford County Correctional Facility, noting that the inmates were some of the most respectful “customers” he has ever had.

Meanwhile, Kelly Flynn and her son, Cory Bride, were floating ideas for filling a space in their building at 1895 Golden Mile that was formerly used as a garage. They considered leasing it out as a salon until someone brought Pelachik to their attention.

“I think the barbershop complements what we do here,” Bride said of that which drives his Hi Cal patrons. The same customers who are turned on by personalized trucks can appreciate Pelachik’s uniquely personalized services, which include shoeshines, straight razor shaves, and scalp massages. “When guys have wait time here, they check out the barbershop and vice versa.”

Bride’s staff of mechanics were among Pelachik’s first customers and remain loyal. “I couldn’t get some of them to get a haircut for months at a time,” Bride jokes of the years before the opening of the Chop Shop. “Now they slip over there on their breaks or after work on Fridays.”

“They’re the best-groomed mechanics in all of Bradford County,” Pelachik responds.

Speaking of grooms, the Chop Shop has been known to host bachelor parties on Saturday mornings for wedding party participants. Regular customers can earn a free haircut with a membership card, and gift cards that proved popular for Father’s Day are also available for Christmas.

Pelachik lives with his sons and wife, Karin in the lake Wesauking area. 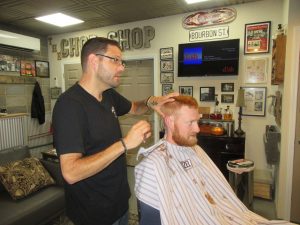 Luke Wright of Athens (seated, above) says that he prefers the Chop Shop because he has never been able to find a stylist at a salon who can give him the cut that he wants. 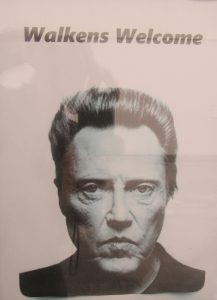 Pelachik’s sense of humor is evident from this sign at the entrance to the Chop Shop, as well as many wall hangings. 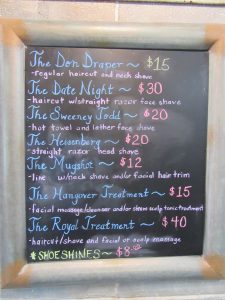 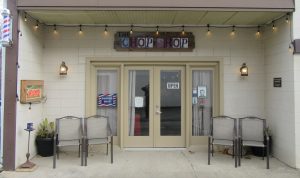