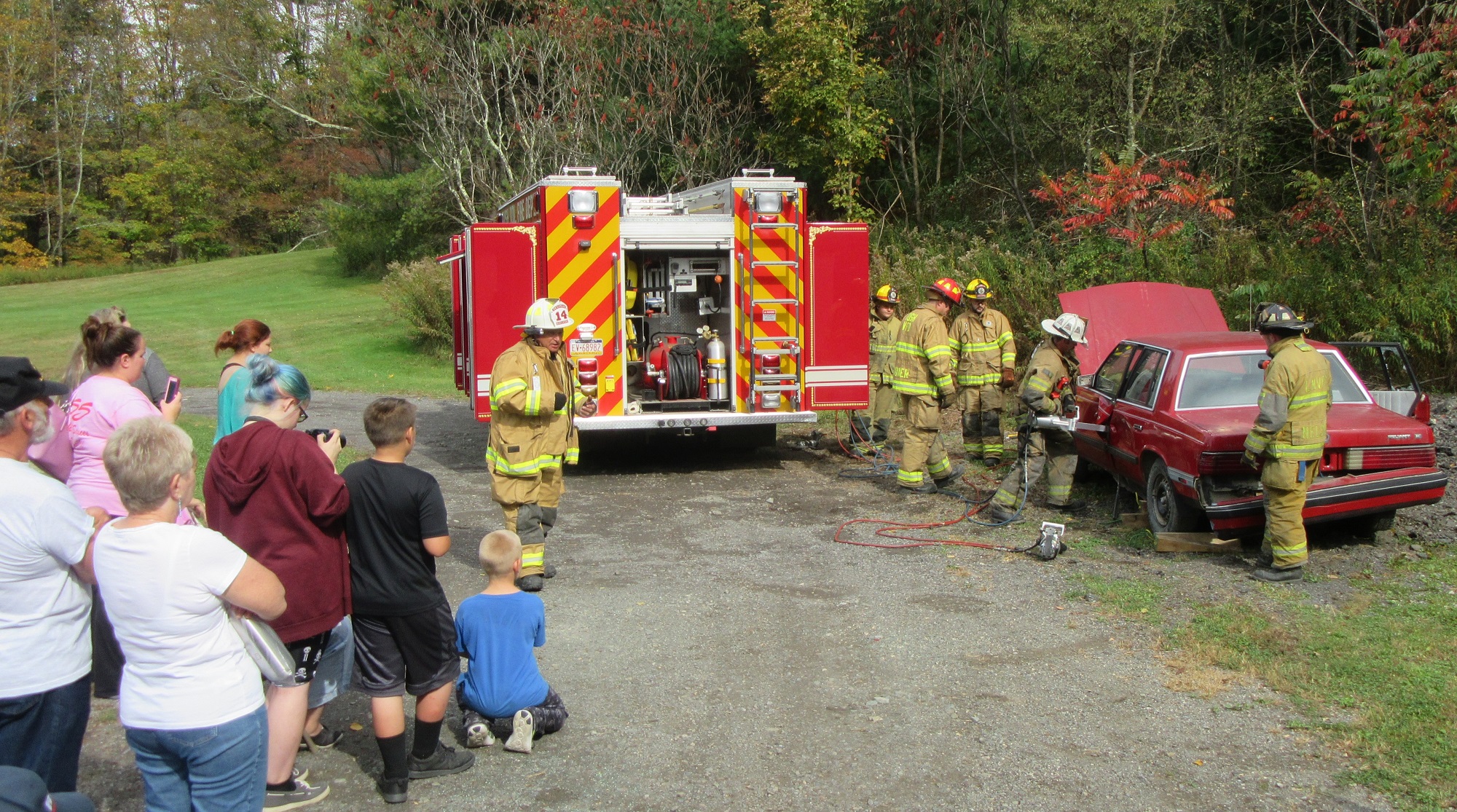 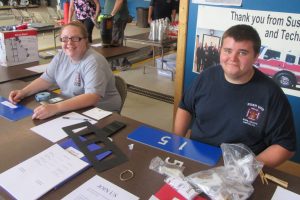 (As seen in the Susquehanna County Independent)

Members of the Rush Volunteer Fire Department (RVFD) held an open house at their primary station in Lawton on Oct. 8. The company’s first such event in a number years was geared toward providing an opportunity for local residents of all ages to see rescue apparatus up close and to watch firefighters practice procedures that save lives in dire scenarios. The open house was conducted in conjunction with National Fire Prevention Month.

Jessica Noldy of Rush brought her daughters, Aubree and Addie (below, right and center). “They wanted to see the mock car crash and the fire trucks,” Jessica noted. The girls quickly made friends with Hailey Birtch (left) of Montrose who was there much for the same reasons. They and other children were given little firefighter helmets, candy, and much anticipated tours of the company’s vehicles. 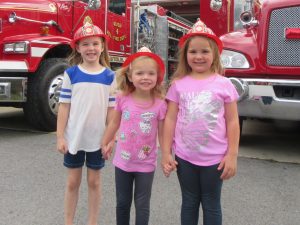 RVFD serves as the first response unit for nearly 150 square miles of rural western Susquehanna County, including Rush and Middleton townships, Friendsville, and portions of Jessup and Auburn townships. Additionally, they have an automatic dual response relationship with the Forest Lake Fire Company and a mutual aid agreement with all neighboring fire departments.

Ed Bieleski, one of three assistant chiefs at the event, said that department enjoys a solid relationship with the community in terms of awareness and participation of residents in fundraising events. A second station on Irish Hill road not only helps keep down response time to residents near Friendsville, it helps keep down their insurance rates. In recent years, helicopters have proven effective at getting patients to hospitals as emergency room services are offered at fewer facilities. That’s the good news.

Concurrently, there have been dramatic changes for rural fire companies over the past 40 years, most notably the number of calls taken by each company and their need to rely on each other. A wider variety of calls and more complicated situations also increase the need for specialized apparatus and continuous upgrades of vehicles and equipment.

“Once you fall behind, it’s hard to get ahead,” said Bieleski.

RVFD is currently looking at replacing a 20 year attack engine. New $64,000 equipment for extracating victims trapped in vehicles is expected to arrive shortly. During a demonstration behind the firehouse on Sunday, Bieleski explained that vehicles built to 2016 standards are much more likely to protect their inhabitants during an accident, but standard extracation equipment used by firefighters cannot cut through the reinforced steel.

Fire and ambulance companies also face a growing number of calls that were once directed to state and local police departments.  “Even for a tree down or a cow in the road, we are the first responder,” said RVFD safety officer Bill Zalewski. “People call ambulances because they ‘don’t feel good.’ We have to respond to all of them.”

Even though the company does not have an ambulance and relies on service from companies based in Meshoppen and Montrose, firefighters still respond to help secure the scene and to perform extracations. The drug epidemic and subsequent overdoses that put such a strain on the resources of emergency responders negatively impacts fire companies too. RVFD averages about 200 calls per year and was pretty much on target as of Oct. 8 at 176 calls.

Without a doubt, the biggest challenge faced by rural fire companies is a shrinking volunteer force.  Several of RFVD’s most dependable active members recently enlisted in the armed forces, Bieleski related. “We won’t get them back,” he said. “If we gain anything from this open house, it would be an awareness of our need for young volunteers.”

(Rush Volunteer Fire Department chief Tom Jauss also participated in the event but was unavailable for an interview.)