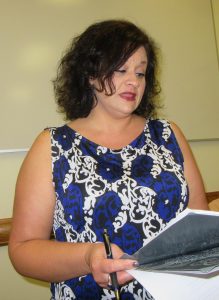 The unanimous approval of a PILOT (payment in lieu of taxes) agreement requested by Sayre borough officials was a trifecta for a project three years in the making. Edgemere Development will soon be able to proceed with the construction of 56-unit apartment building on a piece of land that has been vacant for as long as Sayre has been a borough.

It was the final step toward getting a tax agreement approved, after Sayre Borough Council and the Sayre School Board also agreed to the measure. Borough manager Dave Jarrett related that Sayre Borough put up a $25,000 grant for the project, which will fulfill a great need in the community.

“Older residents are staying in their homes longer because there is no affordable, quality place to go,” Jarrett explained. After spending, on average, $400 in property taxes to the borough and another $2,000 to the school district, senior citizens are left with little or no money to invest in their own needs. “There’s only so much money to go around for all of us.”

Rent for the new apartments, which will have one-to-three bedrooms, will be based on income. Currently, the 3.2 acre property, which is located behind St. John’s Lutheran Church between Hayden and Cherry streets generates only about $800 a year in property taxes.

Commissioner Doug McLinko suggested that the situation in general points to a great need for property tax reform.

Three bridges in Sayre are on tap for repairs, including the Lockhart Street Bridge over the Susquehanna River. The latter was initially scheduled for resealing, as were the other two. But corrosion and runoff at one of the joints was discovered that also needs to be addressed. All of the work is expected to be completed by the end of November. Bradford County is responsible for just five percent of the cost, with state and federal funds covering the balance.

A service was held in South Waverly on Sept. 13 to recognize a lifetime of service to the community by Richard “Lance” Bentley, who passed away on Sept. 6. Bentley served on the borough council from 1992 through this past summer, serving as president since 2010. Among many projects that aided the South Waverly community in which he participated, Bentley (below) helped to construct homes for Habitat for Humanity.

“It was an early loss of a public servant,” said Commissioner Ed Bustin, who participated with the other commissioners the previous evening, at which time a piece of park land in the borough was dedicated to Bentley.

September 4 to 10 was National Literary Week in Bradford County, and Sept. 24 to 30 will be observed as National Adult Basic Education and Family Literacy Week. Bradford/Wyoming Literacy Program coordinator Aubrey Carrington was on hand to read two proclamations, one of which noted that increasing the graduation rate through literacy efforts in a community reduces incarceration rates.

The commissioners applauded the dedication of Literacy Program staff and volunteers, acknowledging that they do a lot with a very limited budget. Not only does the program give people an opportunity to learn, Bustin remarked, “The impact on our community is incredible.”