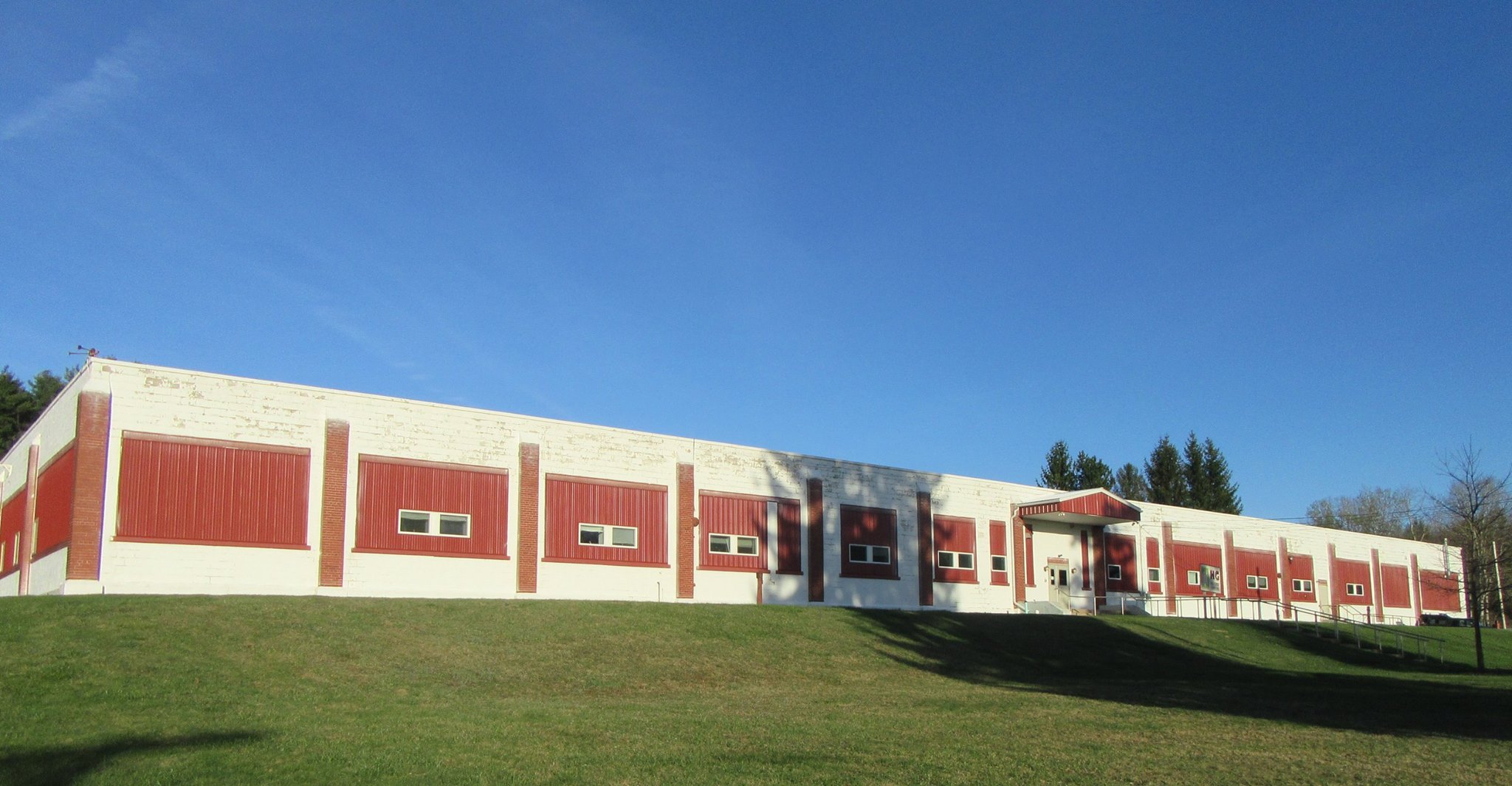 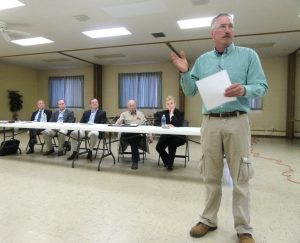 Approximately 70 people gathered in Mildred on April 18 to hear the details about a potential medical marijuana facility in the former Mattern Building (top) from a panel made up of (above, from right) Sullivan County Commissioners Brian Hoffman, Donna Iannone, and Wylie Norton, and business representatives, Cornelius Merlini, Brian Staffa, and Richard Hayden.

Representatives of Elemental Health Group have submitted an application to operate a medical marijuana facility in Mildred, Sullivan County, in a 31,200 square-foot building that once housed a shoe factory. On Tuesday evening, they pitched their plans to the public in a packed St. Francis of Assissi Hall.

“This project happened so quickly,” Iannone noted afterward. The purpose of the meeting was to give the public an opportunity to ask questions and to understand that the facility would be a very professionally run and completely contained operation. “Our goal was to be open,” Iannone remarked.

In the year since PA Gov. Tom Wolf signed medical marijuana into the law, the state has calculated how many growers/producers would be permitted, as well as the number of dispensaries, and in precisely what forms the new drug would be distributed. Only cannabis oil and capsules will be produced here. There will be no edible or smokable forms released.

In the year since PA Gov. Tom Wolf signed medical marijuana into the law, the state has calculated how many growers/producers would be permitted, as well as the number of dispensaries, and in precisely what forms the new drug would be distributed. Only cannabis oil and capsules will be produced here. There will be no edible or smokable forms released.

Pennsylvania was the 23rd of 28 states to approve medical marijuana. Initially, just 12 growing facilities will be permitted and 27 dispensaries. In 2018, another 13 producers will be licensed and an additional 23 dispensaries, bringing the totals to 30 and 50. Hundreds of applications have been submitted for both. Successful applicants will be announced on June 30.

If Elemental Health is among the winners, renovation of the Mattern Building along Rt. 487 will likely begin in August. According to Brian Staffa (below), who would manage the plant, it will take four to six months to get the growing operation underway, then about 28 weeks to get the first successful crop out the door. 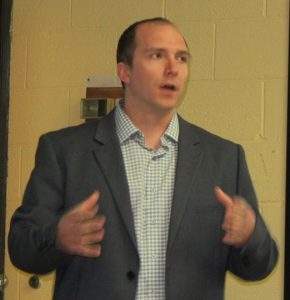 Elemental Health, which already has facilities in Nevada, Arizona, Maryland, and Massachusetts, will use employ carbon dioxide to break down the compounds. It the safest of three common methods, Staffa noted. Hydrocarbon processing, which employs propane or butane can lead to explosions.

The growing schedule would be staggered, with each room in the building about five weeks apart. The un-pollinated female plants will be harvested at the peak of their flowering stage, after which they are dried and processed. The soil from each batch would be discarded into the trash and removed from the building discretely. Staffa is hopeful that it will one day be recycled, as it is in Holland, where it is purchased by tomato farmers.

The final aspect of production would be to determine the strength of the cannabis oil turned into tinctures and capsules based on their intended applications. The most common uses for medicinal marijuana currently are treatment of pain and for intractable seizures. The average age of medicinal marijuana users is 54. In states where medical marijuana is legal, there has been a 35% reduction in the prescribing of opiates for pain control and a 25% reduction in deaths due to opioid overdoses.

Beyond the science, Staffa, company CEO Cornelius Merlini, and Atty. Richard Hayden did their best to assure the public that the facility would be secure, that water consumption and discharge will not affect the usage of either by local residents, and that noise and lights would not be disruptive.

Benefits to Mildred and Sullivan County

If successful with their application, Elemental Health will provide 20 to 25 entry level positions after a multi-million dollar renovation that will be completed by a company from Wilkes-Barre. Management will consist of four or five highly skilled individuals who will train local employees, who could “climb the ladder in two to three years and run the facility.” Entry level jobs will be full-time at family-sustaining wages (~$35,000 annually) with health benefits.

“We are committed to the community and hope to be good partners with the community for a long time,” said Merlini (below). The potential exists for the plant to double in size in the coming years. An open house and job fair would be held in July with the first hiring by August. 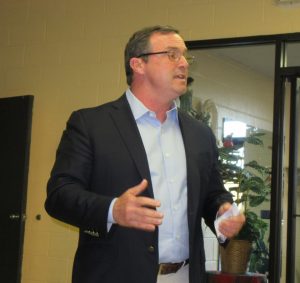 An indirect benefit of the plant would be the running of a natural gas line to Mildred to fuel the facility, as well as farming operations along the way that tap into the line, and to provide natural gas as a utility for local residents. Research conducted by the corporation indicated that there is more than enough natural gas in Sullivan County to meet their needs.

The state’s DCED Pipeline Program could provide up to a million dollars in grant money to cover the cost of the final mile of the distribution line into Mildred. A local utility would have to be established to make the the gas available to residents.

“We’re really confident that we can keep some of this gas in Sullivan County and use it before it reaches the pipeline,” Hayden (below) offered. “It makes economic sense.” Elemental Health could see a return on their investment within six years. 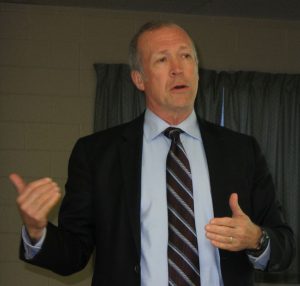 Numerous people asked questions about the operation on topics such as public safety and potential pollutants, mostly for clarification. One man noted that there had been no mention of the current employees of Sullivan County Logistics (SCL), the sole occupants of the building that is owned by the county and generates no taxes.

“We cannot guarantee that Sullivan County Logistics will stay in Sullivan County,” said Commissioner Hoffman, who noted afterward that the county communicated the potential sale with SCL as soon as possible to mitigate surprises or misunderstanding. The commissioners also orchestrated a meeting between SCL and a number of in-county agencies, as well as thye Northern Tier Regional Planning and Development Commission.

“We are hopeful and we do believe that there is a solution out there, but these are decisions that the commissioners should not be involved in,” Hoffman told the audience. The point of maintaining a distance from SCL’s internal business decisions, he explained, is to avoid showing favoritism to any particular property owner. Once SCL management makes a decision regarding a new location, the county may resume its support to keep them in the county.

One elderly gentleman strongly objected to the facility and its product. Citing a member of the family who had been jailed for possession and abuse of drugs, he castigated the professionals and the commissioners, maintaining that, no matter what they call it, “It’s a drug that you’re pushing on us.”

Commissioner Iannone responded that she had lost a sister to an opiate overdose and would rather have medicinal marijuana available as an alternative.

As the man and a woman who was with him stormed out of the meeting, an audience member said aloud, “Nobody has ever overdosed on marijuana.”

While others might have silently disagreed with the proposed operation, most in attendance seemed relieved that a viable business wanted to take over the entire Mattern Building, for which $50,000 was budgeted this year for improvements on the building. (If Elemental Health purchases the building, the county will not have to spend that money.)

“It’s going to go somewhere in the state,” said former county commissioner Jim Rogers, who had helped to acquire the Mattern building for the county some years ago to keep it from falling down. “It might as well be here. There are a lot of economic benefits.”