Countdown is On for 10th NEPA Bluegrass 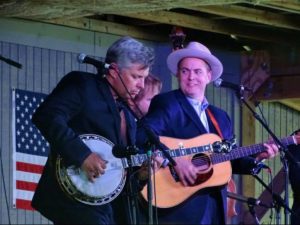 The U.S. Navy Bluegrass Band, featuring Danny Stewart Jr. of Sugar Run on upright bass (top, far right), will be among the headliners on the roster of the 10th annual NEPA Bluegrass Festival at Tunkhannock this year. Another key act will be the Gibson Brothers (above).

Fans of bluegrass music are making plans to converge on Lazy Brook Park for the 10th annual NEPA Bluegrass festival, which will be held from Thursday to Sunday, June 1 to 4 in Lazy Brook Park, east of Tunkhannock. Headliners this year include the Gibson Brothers, Leroy Troy, Danny Paisley & the Southern Grass (below), Nothin’ Fancy, and the US Navy Bluegrass Band. 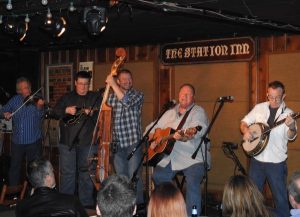 The purchase of a weekend pass for the family-friendly event includes free camping. Except for a dinner break each evening, the music is almost continuous from Friday afternoon through Sunday afternoon. Headliners and key local acts take turns on the Traditional Stage, while newer acts and those who like to bend the rules draw crowds to the Progressive Stage.

The final shows on Friday and Saturday evenings at the Progressive Stage often represent collaborations of the bounty of talent on hand. There is a Gospel Sing & Jam at the Traditional Stage on Sunday prior to a final concert by the headliners.

Music literally fills the air as festival-goers make their way around the wooded grounds of Lazy Brook Park, once a thriving neighborhood to families who often return for the event. The paved roadways, totem poles, shade trees, world-class carvings, landscaped walking trail, playground, and the clear waters of Tunkhannock Creek provide a unique backdrop that puts NEPA Bluegrass at the top of the list for many who follow the bluegrass circuit.

In addition to the sights that can be taken in at leisure, there are also numerous family-friendly activities planned, especially on Saturday at the Kidz Korner pavilion. Between acts, guests are encouraged to take part in music workshops, and join the pickers in the Jam Tent. Whether an old-time picker or a novice, bringing your instrument and voice is a must!

An intriguing addition to the roster this year is the US Navy Bluegrass Band, a premiere ensemble whose members are skilled on multiple instruments, including banjo, acoustic and electric guitar, mandolin, fiddle, and upright bass. Formed in 1973, the band has played at the Grand Ole Opry and for US presidents Jimmy Carter through Barack Obama. This year, they played for the National Easter Egg Roll on the White House Lawn. In addition to overseas engagements, the Navy Band regularly performs for veterans, elementary schools, and active-duty US Sailors.

Organizer Christa Stewart related that, even if her son Danny was not the bassist in the Navy Band, she would be honored to have them at the festival. It is rare, she added, for the band to commit to a two-day show.

Nothin’ Fancy (above) returns to NEPA Bluegrass this year from the Shenandoah Valley of Virginia. For the past two years, they’ve thrilled festival goers with their strong vocals, powerful instrumentation, and energetic stage presence. They are among the regular performers whose friendly, down-to-earth charm was appreciated both on and off stage. The group formed in 1994 to compete in a bluegrass competition and have since released 11 full-length albums. Nothin’ Fancy has won the Society for the Preservation of Bluegrass Music of America’s Group of the Year Award six times. 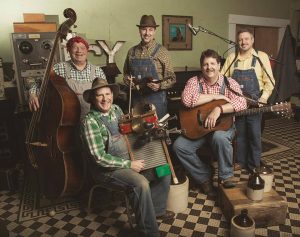 Leroy Troy is a regular performer on the Marty Stuart Show on the Nashville Network. He will be bringing to NEPA Bluegrass his hillbilly act the Tennessee Mafia Jug Band (above). “He might not be a household name yet to people in the northeast, but we’re thrilled to have him up here,” said organizer Christa Stewart. “He is super intelligent and very talented. There’s an element of comedy to his show that is really fun.”

For continuous updates, follow NEPA Bluegrass on Facebook and at www.nepabluegrass.com. Weekend tickets are $75 per person, which includes free camping. Day tickets are available as well, costing $25 on Friday, $30 on Saturday, and $20 on Sunday. Electricity for campers is available on a first-come, first served basis. As an alternative to camping, Comfort Inn & Suites Tunkhannock – less than four miles away – is offering a special Bluegrass Rate of $99 plus tax per night.