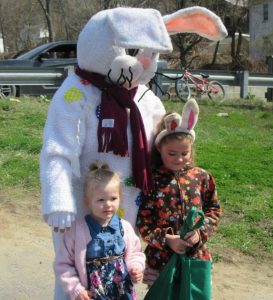 The excitement builds as children six-to-eight years (top) old fill their baskets and bags with eggs at the annual Meshoppen Community Easter Egg Hunt, where the arrival of the Easter Bunny (above) is always a big hit.

Less than a week ago, the ball park at Meshoppen was still holding water from recent spring flooding. That was already a distant memory by this morning as a brilliant sun shone on the annual Meshoppen Community Egg Hunt. The event drew hundreds of local families to the park and sent numerous children home with candy and great prizes, including bicycles, as temperatures soared into the 60s. 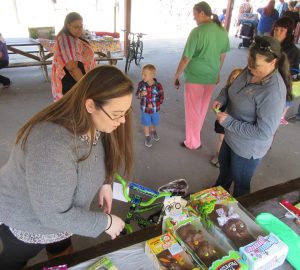 The field was dry enough for the disbursement of plastic eggs for each age group from 3-to-5 to 13-and-older to scramble for those they hoped would hold numbered slips. The rest were filled with candy. Ruthanne Nace and Christina Beaver (above) were on prize patrol, matching up the slips with prizes spread across picnic tables as quickly as they could. 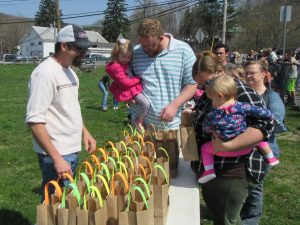 Parents of infants to two-year-olds walked up to a table (above) where the tots selected a basket, each of which contained random eggs containing either candy or prize slips. The first two big winners of the day were Jenna Visavati (below, left) and two-month-old Adalyn Ciprich (below, right with Mom and sister Aubrey). 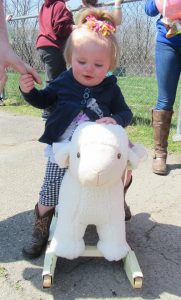 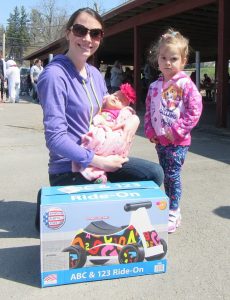 In addition to hunting for eggs, participants could help themselves to cupcakes and other snacks and coffee and hot chocolate prepared by Jenny Graham and Mariah McClain (below). The annual egg hunt and the Meshoppen Community Halloween Parade could not succeed without such dedicated volunteers, including Kristen Marshall and her children, Jason and Camryn; Mike Houser and more, who helped this morning. 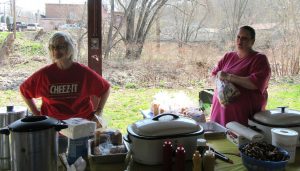 Other members of the community, while not actively involved, were standing by to assist in the event of an emergency, including Scott Hayward, Dillon Hillard, and Jolene Sharer of the Meshoppen Fire Company and Meshoppen Police Officer Sierra Crane. 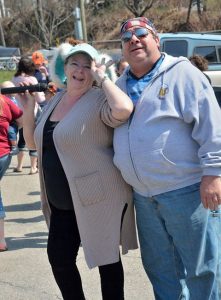 Holly Stark coordinated the event with assistance from her husband, Rick (above photo by Joyce Boardman). Holly, who also emceed the egg hunt, manages the Meshoppen Holiday Fund with support from local businesses and organizations such as the Kiwanis. Individuals and business owners who would like to support Stark’s efforts can contact her via Facebook or at 570-833-4317.

Three-to-five-year-olds hit the field in search of the most valuable eggs. 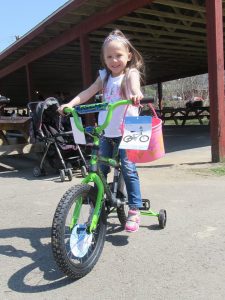 Four-year-old Aleena of Laceyville was the bike winner in the 3-to-5 age group. 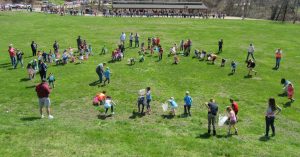 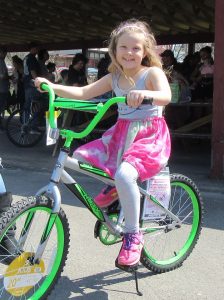 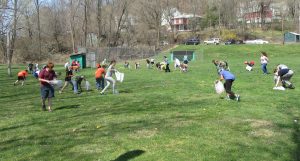 And they’re off! Nine-to-12-year-olds run for eggs. 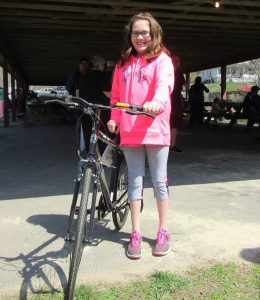 The bike winner in the 9-to-12 age group was Gabby Furman of Laceyville. 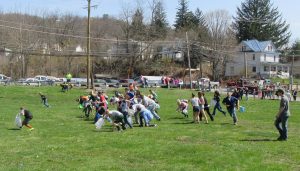 Teens and adults spread out in the last leg of the egg hunt on Saturday morning. 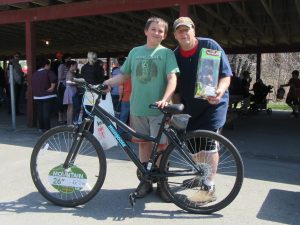 Robert Radgoski (above, right) won the bicycle in the 13-and-older age group and gave it to his son, Avery. 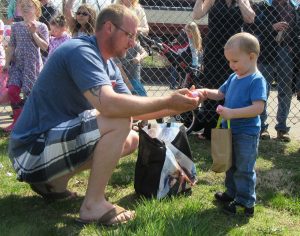 Father and son sort through eggs in the 0-to-2 age group. 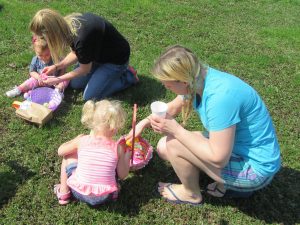