By: Rick Hiduk
In: CCAP
With: 0 Comments 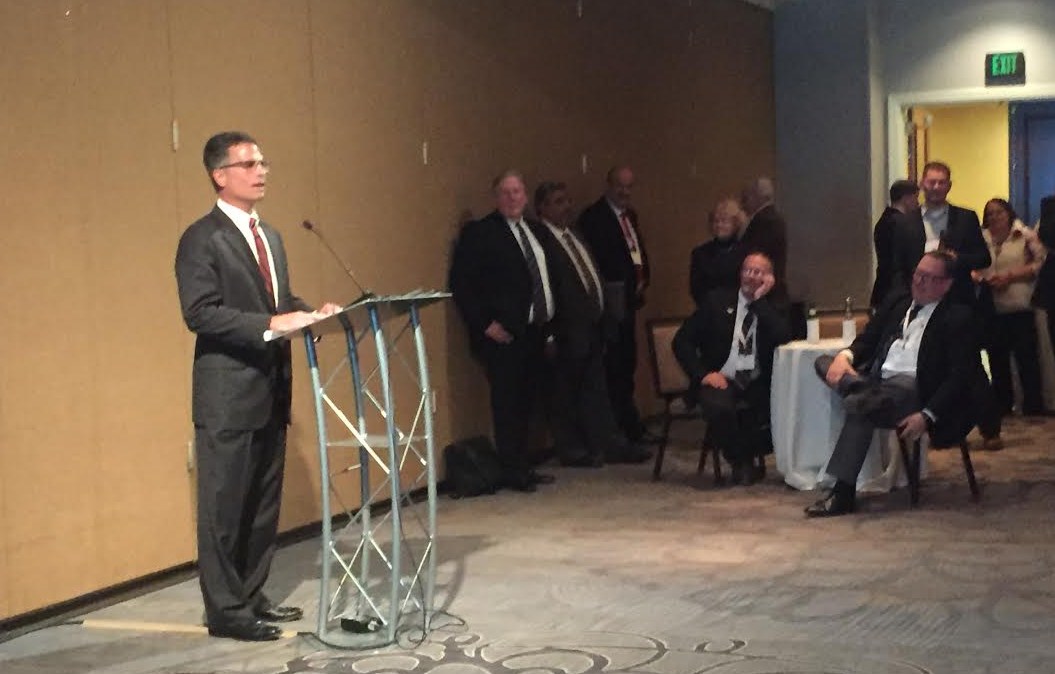 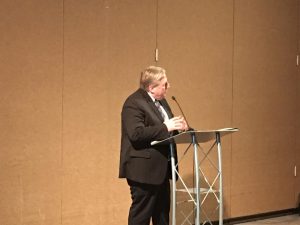 Former Pennsylvania Secretary of Revenue Dan Meuser (top, left) speaks of the value of natural gas production for the entire Commonwealth at a State of Energy in Pennsylvania presentation at the recent CCAP conference in Harrisburg. The meeting was sponsored by Sen. Scott Wagner (not pictured) of York County and facilitated by Bradford County Commissioner Doug McLinko (above).

Nine of 12 commissioners from the four counties that comprise the Endless Mountains of Pennsylvania attended the three-day Spring CCAP (County Commissioners Association of Pennsylvania) Conference in Harrisburg from March 26 to 28. Topics that caught their attention ranged from energy issues and environmental protection to the potential consolidation of state Human Services departments and ways to keep people with mental health issues out of the general prison population.

Participating commissioners related upon their return that they covered as much ground as possible, attending a variety of workshops and breakout sessions. But there were two meetings that brought several of them together at one time: a State of Energy in Pennsylvania meeting and the first ever CCAP Women’s Caucus Breakfast.

On March 27, most of the commissioners from northern tier counties attended the State of Energy in Pennsylvania meeting sponsored by York County Sen. Scott Wagner. According to Bradford County Commissioner Daryl Miller, the event was well-attended and a lot of important information was shared. 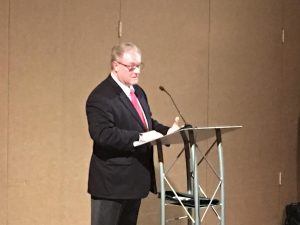 “Wagner (above) spoke of the general impact of Marcellus shale on the Commonwealth and the importance to landowners and citizens,” said Miller. “Tony Ventello (of the Bradford County Progress Authority) presented a brief state of the progress in our county and region as to the economic activity that has been spawned because of the Marcellus shale activity.”

“I think that it was well worth it,” Wyoming County Commissioner Tom Henry offered. “I think that we need to follow up with these counties and form a group so the governor and those folks in Harrisburg know that we are serious. There’s power in numbers.” 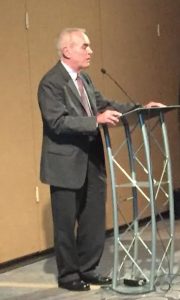 Miller explained that the language of HB 557 is very similar to that of two previous pieces of proposed legislation that were never brought up for a vote because they were introduced too far into the legislative season. With ample lead time for this attempt at striking a blow to gas companies that charge excessive post-production coasts, Miller stated, “We’re hoping to engage it and get it over the finish line. We’re hoping to gain a lot of momentum and support from the Farm Bureau, Realtors Associations and other organizations.” CCAP, he noted, passed a resolution more than a year ago supporting reform of the Guaranteed Minimum Royalties Act.

“The bill adds language stating that no deductions, such as expenses in costs of production, can result in a royalty less than the 12.5 percent,” noted fellow Bradford County Commissioner Ed Bustin. “It has yet to come to the floor this session.”

Henry said of Wagner’s remarks, “Hearing his thoughts on energy and natural gas were interesting. It’s hard to get all of the county excited about natural gas when it only effects so many of us. I’m worried about it and that we will lose our impact fee, which helps our 911 center and our emergency services.”

Wyoming County Commissioner Judy Mead and Sullivan County Commissioner Donna Iannone are members of the state’s Natural Gas Task Force and represented their respective counties at that meeting. Iannone was impressed with a presentation by Epiphany Water Solutions on alternative ways to treat and reuse spent frack water. Iannone also attended a meeting on Energy, Environment and Land Use, where a key topic was how to deal with the recycling of electronics which, in recent years, has become a huge burden to municipalities that once offered the service to residents at little or no cost.

For the first time at a CCAP conference, female commissioners from across the state took some time apart from their male counterparts at the Women’s Caucus Breakfast on March 28. While Iannone, who initiated the event, modestly reported that she was “part” of the meeting, which was “well-received,” Susquehanna County Commissioner Betsy Arnold regarded the even as “very supportive.”

“I’m so proud of my friend Donna for putting it together,” said Arnold. “It gave us a venue where we could talk as women.” Most inspiring to her was a story shared by a 22-year commissioner from western Pennsylvania. “She offered words of wisdom, advice and encouragement to those of us who are newbies. We were safe to talk about what we are dealing with on our personal walks and journeys.”

“The meeting was an excellent way for women to work together in a non-partisan manner,” Ionnone concurred.

The commissioners noted that the spring CCAP conference is heavily weighted by legislative issues and budget concerns. Wyoming County Commissioner Ron Williams is supportive of House Bill 388, which would increase the amount of training required by county sheriff’s and deputies, as well as an initiative in Berks County that has proven effective in diverting people with mental health issues from being sent directly to prison.

Daryl Miller and Ed Bustin of Bradford County are concerned about a potential merger of Human Resources at the state level, and the additional burden put on Children & Youth Services as a result of the Jerry Sandusky case.

Williams and Henry attended the CCAP Courts and Corrections Committee meeting, where they learned of a push to expand the training program for sheriff’s from three to 19 weeks (from 160 to 760 hours). “I think additional training is good,” said Williams. “For everything new they get trained in, you can use them in more aspects in the county.” The more extensive program, which has the support of the state’s sheriffs association, would be paid for by doubling the Writs of Execution fee.

“What really caught my attention was a session on county jail diversion,” Williams related, in reference to a Comprehensive Behavioral Health Task Force presentation by a forensics services team from Berks County. They explained how counties can reduce the number of people with mental illness admitted to jails through more focused initial assessments that include “mental first aid.”

“It will take a lot of education and retraining,” Williams said of implementing the program in other counties, but the results would be worth it. Admitting people to prisons who are more in need of mental health treatment and counseling than incarceration would reduce the risk for suicide and assaults. Under the current system, Williams added, “You’re jeopardizing the person who has the mental illness.”

In the past year, Wyoming County experienced an explosion in prison population that led to an emergency meeting of judicial officials who proposed several ways of reducing the number of inmates outsourced to other jails and preventing so many non-violent first-time offenders from being committed to prison. At that time, people with mental illness was was not a key part of the conversation.

The attention to sexual abuse of children as a result of the Jerry Sandusky case has resulted in mandatory reforms of how at-risk children are processed through the judicial system and where they are deemed to be safe.

“The number of cases that Children & Youth workers have to look into has mushroomed,” Miller related. “The number of reports has grown in spite of limited resources, pushing case workers to the limit. We looked at it from county-to-county, trying to adopt best practices, but we’re just trying to wrap ourselves around the magnitude of it. We have open positions in Bradford county that we can’t fill, and we’re not alone.”

“When a child comes in who needs to go into custody, the case worker has to go out and see who their neighbors are and who their relatives are to place them with someone they are familiar with,” said Williams, who expressed gratitude that, while the turnover rate among caseworkers in Wyoming County is substantial, it is not as bad as what some counties are experiencing.”

“We have been working closely with our CYS and Human Services directors on the issue of recruitment and retention for several years, and were very interested in hearing what other counties are doing,” Bustin related. “Bradford County is currently operating with only about 60 percent of our caseworker positions filled. We have several initiatives in place that we hope will positively impact that number, and the CCAP session reinforced the direction we are going and provided us with additional strategies we will be discussing further.”

“This proposal is part of the budget package and is estimated to provide significant savings through elimination of service duplication and overhead, as well as provide for service improvement in each of the agencies involved, according to opening session keynote speaker, Randy Albright, PA’s Secretary of the Budget Office,” Bustin noted. “During a roundtable discussion with members of the Senate and House, the tone was decidedly cautious regarding these improvements. In fact, Rep. Gene DiGirolamo, the Majority Chair of the House Human Services Committee, feels the creation of such a large department may be a ‘disaster.’

“Many commissioners, myself included, are expressing concerns that, within this massive bureaucracy, the mission of some smaller departments, such as Drug and Alcohol and Aging may be lost,” Bustin continued. “As one panel member expressed, ‘in the current model, if the (acting) Secretary of DDAP (Department of Drug and Alcohol) wants to speak to the Governor, she can walk right over and see him. In the new model, the head of the Drug and Alcohol Department would have at least two levels of administration between her and the Governor’s office. The same would be true with the head of Aging, whose relatively small budget would now be in the mix of a new $40-billion dollar Department.’”

Other topics mentioned by the commissioners upon their return included ways to increase the number of drug drop boxes inside pharmacies, eterans homeless initiatives, and cyber security.

The next statewide gathering of the county commissioners will take place this summer in Erie.