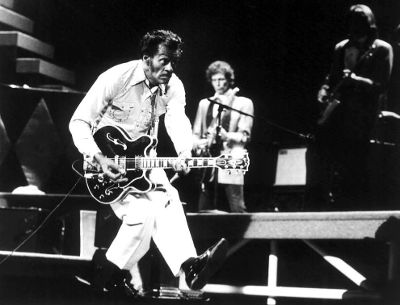 Chuck Berry, who died on March 18, 2017, didn’t invent Rock ‘n’ Roll, but he was certainly one of its most important creators and purveyors. He was often imitated, both illegally by the Beach Boys and with great pride by the Beatles and Rolling Stones, but his unique blend of humor, sexuality, and talent will never be duplicated.

In 1973, when I was 11, my mother enrolled in one of the Record of the Month clubs that was popular at the time. The enticement was that, for 99 cents, you could get 10 popular albums with no shipping cost. Afterwards, a flier came in the mail each month with lists of new albums to order at a fraction of store costs with a reasonable shipping fee. If you did not return the postcard, the Album of the Month was sent to you automatically at full cost.

Mom was particularly savvy in her selections, and our home collection quickly grew with albums by Steppenwolf, Cher, Helen Reddy, Led Zepplin, Al Green, Carly Simon, Three Dog Night, Ike & Tina Turner and the like. Two albums she ordered, however, were not what she’d expected: Cruisin’ 1957 and Cruisin’ 1962. Mom had thought that they were merely catalog albums of hits from those two years. Instead, they were reproductions of radio broadcasts by popular radio personalities on some of the most popular AM radio stations of that era.

They, and the other Cruisin’ records in the series on which I spent my precious allowance, were life-changers for me. I suddenly knew that I wanted to be a Disc Jockey, and I was immersed in a world of “golden oldies” that would provide the bedrock for my early career in music research, radio programming, and emceeing parties for people 30 years my senior. I started by recording radio shows in my bedroom, imitating the DJs, making up my own Top Tens, and even recording my first commercials – often satires inspired by the popular Wacky Packages bubble gum stickers.

I was introduced to so many popular artists and songs through those records and other oldies collections I acquired, but few performers stuck out to me like Chuck Berry. Since Mom had sparked my interest, it was only natural that I would interview her about the ’50s and what music she had liked. As it turned out, Mom was an early fan of rock ‘n’ roll, despite being brought up on country & western music and despite the controversy surrounding rock ‘n’ roll and rhythm & blues (a term that would take another decade to catch up with me.)

“How could these old-fashioned, sometimes silly-sounding songs have been controversial?” I asked in a purely innocent way that only a boy growing up in lily-white northern Pennsylvania could.

“Because a lot of people thought that rock ‘n’ roll music was dirty,” she answered.

And Chuck Berry, I learned upon further questioning, was considered among the dirtiest. Little Richard, who I learned to respect while never liking as much, was right behind him.

I pressed my father for his opinion and was apprised for the first time of the great chasm that had developed between fans of and detractors of rock ‘n’ roll. Why didn’t my father like rock ‘n’ roll? “Because it was ‘booger’ music,” he told me. He had grown up in the coal region listening to country & western, big band, and polkas. To a largely racist population, rock ‘n’ roll was associated with black people, whether the people who sang it were of color or not.

Elvis Presley, despite his enormous popularity, was criticized for both his vocal delivery and his gyrations, clearly emulating the style of a Negro performer. But Elvis, like Jerry Lee Lewis, began their careers as country singers on Sun Records along with Johnny Cash. Their music was creatively dubbed “rockabilly” and was accepted by both white and black audiences.

All hypocrisies aside, Chuck Berry infused a sexual overtone in his music that could not be denied. He didn’t simply gyrate his hips. He was literally “schwinging that thang” at his audiences and the TV cameras – whether by the way he pumped his guitar, the manner in which his lyrics prodded you, or the way his seemingly elastic body commanded the entire stage.

Watch his performance of “Sweet Little Sixteen” on American Bandstand (https://www.youtube.com/watch?v=ZLV4NGpoy_E) and it’s easy to see why he scared the b’Jesus out of white parents. And white boys who imitated his dance moves might have impressed the chicks, but they were castigated by adults and racist teens who probably beat them up because they couldn’t get their hands on Chuck Berry.

And, when you look at the subject matter of Chuck Berry’s songs – “Sweet Little Sixteen” and “Almost Grown” in particular – it’s easy to see why he was arrested and jailed in 1960 for allegedly having sex with a minor. He twice appealed his conviction, only to get a retrial that he also lost.

Berry’s discography is fairly easy to track on two Billboard charts; Top R&B Hits, and The Hot 100 (the pop chart). Unlike his white rock ‘n’ roll counterparts, he never charted on the country charts and was far too wild to even dent the Adult Contemporary charts. I scanned the aforementioned charts and wielded my formulaic magic to come up with the ultimate list of Chuck Berry’s 31 biggest hits, six of which only charted on the R&B charts and eight of which only made the pop charts.

Because the R&B charts varied in length from 30 to 100 songs over time, it’s possible that some of the pop-only entries below would have scored higher on this chart had the R&B charts been larger. So, I admit, the positions become more ambiguous beyond #20. Also, there were no R&B charts in 1964 because rhythm-oriented music was so dominating pop music at the time, that the two charts had become almost identical. “Soul” music had changed that by 1965, and charts listing primarily black artists returned.

I started this project with “School Day” in mind, as it was the one song by Chuck Berry to which I’d instantly related as a kid and always liked the most. When I saw that it had only peaked at #3 on the Hot 100, I was disheartened. But, when I did the math, it barely managed to eclipse “Maybelline” due to its enormous success on the R&B chart and its longevity on the pop charts. Note that no song by Berry hit #1 on both charts. In fact, his only pop #1, “My Ding-a-Ling” lands at #9 on the overall chart because it was not very popular with black audiences.

(x) following #1 or #2 indicates the number of weeks at that position.

My formula starts with a reciprocal point value based on each song’s peak position on the chart. #1 gets 100 points, #2 gets 99 points, and so on. Extra points come from the number of weeks the song was on each chart and the total number of weeks at #1 and #2. The only tie was between “Little Marie” and “Brown Eyed Handsome Man,” which went to “Little Marie” because it was assumed to have made both charts (even though it was during 1964 when Billboard didn’t have an official R&B chart.)

My personal favorites were: