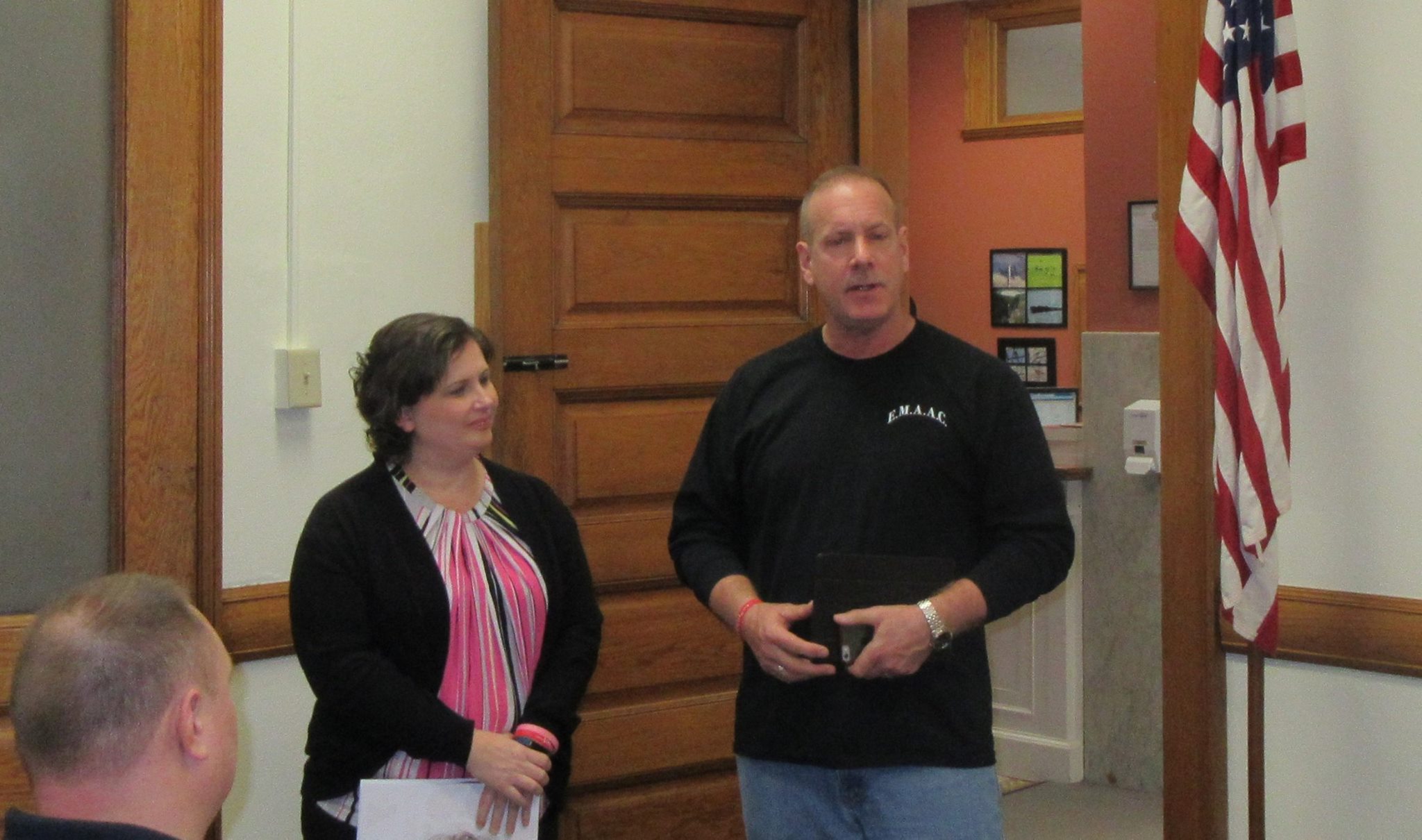 Bradford County YMCA executive director Charity Field (above, left) and Endless Mountains Addiction Awareness Committee president Keith Kinsman addressed the Bradford County Commissioners on Thursday on the progress made in the past year to increase addiction awareness and of the work yet to be done.

One representative each from the Endless Mountains Addiction Awareness Committee (EMAAC) and the Bradford County Branch YMCA met at the Feb. 23 meeting of the Bradford County Commissioners to announce a new partnership to increase awareness of addiction. On Friday, March 10, EMAAC and the YMCA will host An Evening of Addiction Awareness at the YMCA at 9 College Ave., Towanda.

Music and activities for children will begin at 6:30 pm, followed by a series of speakers at 7 pm. Entertainment will be provided by Brandon Parks & Siffrinns, and there will be face painting and crafts for the kids. Attendees can gather information about addiction and available services and a bite to eat throughout the event.

Keith Kinsman updated to the commissioners and their audience on progress made since last May’s heavily-attended addiction awareness rally held on the courthouse lawn. Kinsman lost his son, Ben, to heroin addiction in February 2016 and coordinated the rally with the help of county officials. Kinsman and others dealing with the opioid addiction crisis subsequently formed EMAAC, which is based in Bradford County but serves eight counties in all.

EMAAC guided or participated in 27 awareness events last year and assisted with the placement of 111 people needing help with addiction. “It has been an outstanding collaboration,” Kinsman said of EMAAC. “We’re growing every day as a committee.”

Kinsman explained that anyone calling 570-469-4014 will reach an operator who will connect him or her with the appropriate agency or service provider.

Though his message now is more hopeful than that of a year ago, the statistics continue to be staggering: 144 people die in the USA every day from opioid overdoses, including an average of 10 people per day in Pennsylvania. This year, the number of deaths from opioid overdoses in the United States will eclipse the number of American lives during the entire Vietnam War, Kinsman noted.

Kinsman reiterated that the current opioid addiction crisis is largely man-made, citing the fact that 80 percent of those addicted to heroin were first addicted to pain medication like Vicodin. “Back in the day, we were all afraid of heroin,” said Kinsman. “That all changed in 1994 when opioid pain killers came on the market. Once society got a taste of them….”

Commissioner Ed Bustin expressed hope about new state legislation limiting the number of pills that can be disbursed per prescription and the number of times that a prescription can be refilled. A new ten-bill package has been introduced, he noted, that also addresses detoxification and housing for those struggling with addiction. A database tracking attempts by people to refill expired prescriptions is also reaping positive results.

Commissioner Doug McLinko related the importance of disposing of unused opioid pharmaceuticals and other medications to prevent their use by anyone other than those for whom they were intended. The county has numerous drug drop boxes at police departments across the county.

Sheriff C.J. Walters (below) said that his department is hoping to expand the initiative. There are also currently two weekends per year – in April and in September – when the prescription drug collections are concentrated in municipalities where full-time boxes have not been placed, like Wyalusing, New Albany, and Warren Center. Walters related that 131 pounds of pharmaceuticals were collected in the last quarter of 2016 alone. 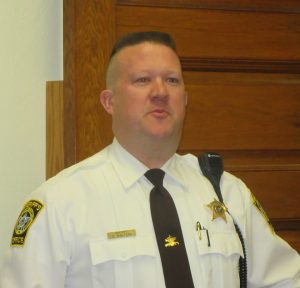 According to Field, the event at the YMCA will feature powerful speakers who will share heartfelt stories of both addiction and recovery. In addition to families already hit hard by addiction, the event will offer information on the warning signs of addiction to help families who may be in danger of losing a loved one to opioids or facing the enormous struggle that some endure to put their lives back on track.

For more information about An Evening of Addiction Awareness, interested readers may contact Field at 570-268-9622 or charityf@rvrymca.org.