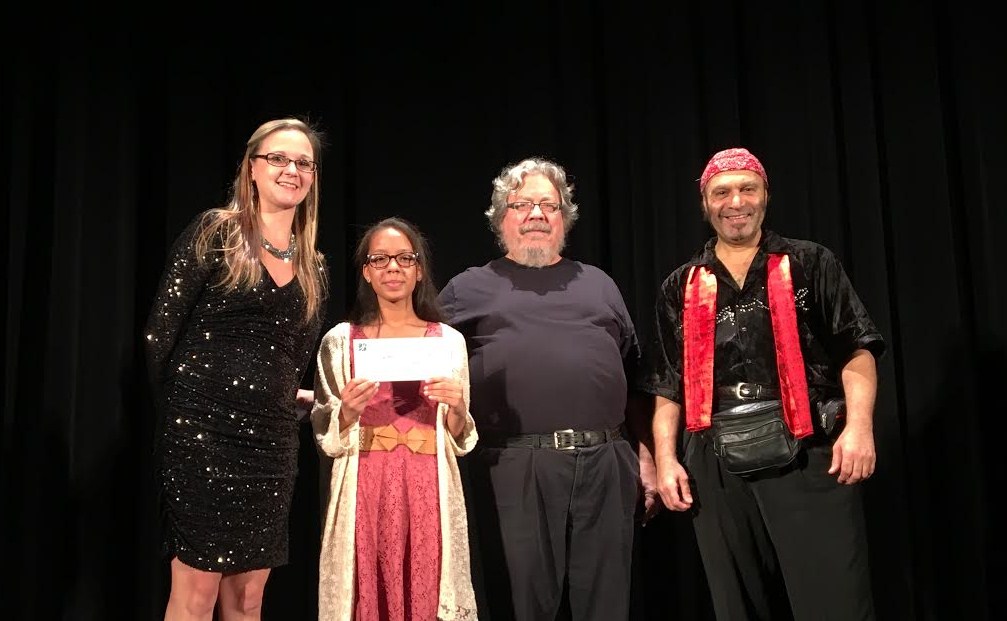 The first Twin Tiers Talent Competition was held on Oct. 30 in the Guthrie Performing Arts Center at the Sayre Theatre, and Lacey Maryott (above left) a teacher’s aide in the Towanda School District was selected as the winner by the judges. First runner up was Athens-based world music duo Hejira, featuring Don Baragiano and Ashraf Hakim (right). Second runner up was Tianna Grace Hickey (second from left) of Elmira, NY.

Contestants entered the competition by submitting a video demo, and the top 10 entries were selected to compete live during the Sunday competition. The entries included singers, instrumental musicians and a poet.

Master of ceremonies was professional singer and actor Lukas Poost of Wyalusing, and the judges were Eileen Hall of Red Door Photography and Wyalusing-based musician June Werner. Poost also served as a judge.

Lacey Maryott, 31, is from Rome, Bradford County. She is currently a classroom aide at Towanda Area High School, working with 8th, 10th and 11th graders. Although she performed in many high school musicals, Sunday was her first stage performance in over a decade. Lacey is a 15-year cancer survivor.

Don Baragiano and Ashrak Hakim, the musicians comprising Hejira, are conservatory trained musicians who bring their unique compositions of classical, middle eastern, world rock music to concert stages across the world. Don Baragiano cemented his love of world music while living and working in Saudi Arabia. Ashraf Hakim has played a variety of musical styles on his cello since he was a classical orchestra member in his native Egypt. He has performed in 30 countries and across the United States in a variety of settings and playing a variety of music.

Tianna Grace, 12, is a 7th grade student at Broadway Middle School in Elmira.  She has been singing on stage since the age of 6 and won the title of Miss Chemung County at the age of 9. Tianna hopes to attend the Manhattan School of Music in New York after high school. She dedicated Sunday’s performance to her Aunt Denise and all those who have lost a loved one.

The Twin Tiers Talent Competition is a program of the Bradford County Regional Arts Council. Established in 1976, the BCRAC is a nonprofit organization dedicated to building and supporting a thriving regional arts community by advocating for the Arts, cultivating quality arts programming and preserving Bradford County’s historic theaters as venues for performances, community events, and movies. For more information, visit BCRAC online at www.bcrac.org or www.facebook.com/BCRAC.