By: Rick Hiduk
In: Towanda
With: 0 Comments 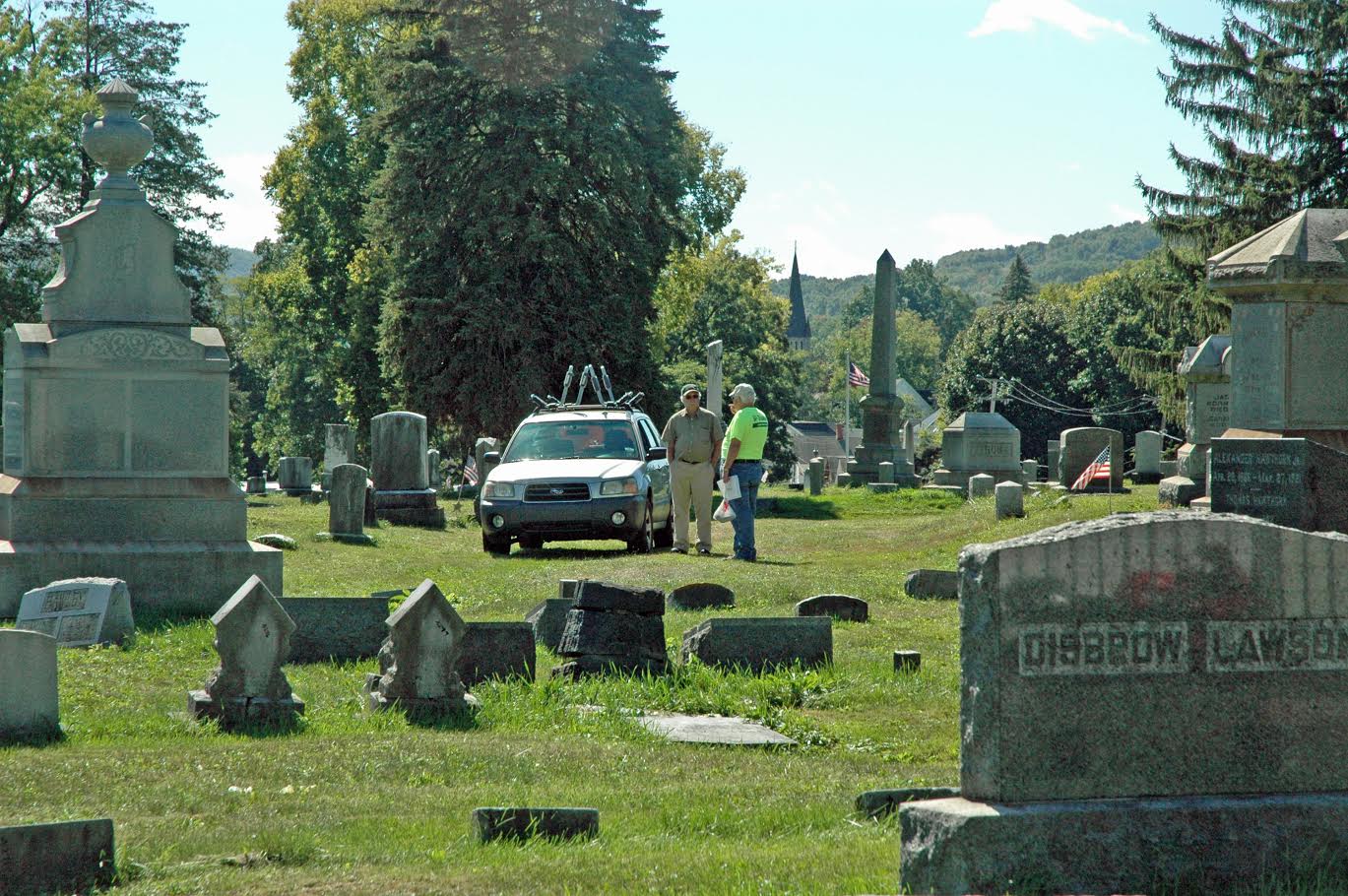 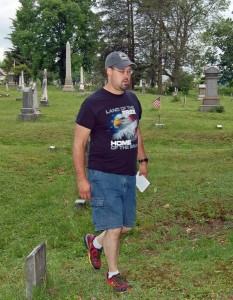 Riverside Cemetery Association board member John Korfmann (above) and professional land surveyors (top, left) Dennis Rialland and Jeffrey Geiss recently completed a topside survey of the 5.5-acre cemetery at Towanda. The practical purposes for surveying the site are to correlate gravestones with cemetery burial records, map the cemetery to allow people to find their way around it, develop public park components, and assess the possibilities for new burial plots on the property.

Fifty thousand dollars of in-kind survey field work services have been completed for the Riverside Cemetery and its governing body, the Riverside Cemetery Association (RCA). During the spring, summer and fall of 2015 and 2016, the team of Jeffrey Geiss and Dennis Rialland, certified land surveyors, retired certified land surveyor Betsy McKean, and Riverside Cemetery Association board member John Korfmann, identified and recorded single stones, multiple corners for family monuments, and other objects such as trees and plot fences. Every object is identified with a number, a photograph (nearly 3,000 total), and their absolute location is recorded using specific pairings of latitude and longitude in a Cartesian coordinate grid on the historic 5.5-acre property at 122 William Street.

“This remarkable act of generosity, commitment and foresight by the survey team on behalf of the community cannot be over-estimated,” said Marguerite Fox Picou, RCA executive director. “The raw data, resulting reports and planned developments will go a long way to help preserve core histories of Towanda and Bradford County.”

The topside survey is supplemented by hand recording of information of each grave marker by surveyor and RCA board member McKean. Also, a ground penetrating radar survey reveals approximately 300 unmarked graves. Most of the unmarked graves were found in the original southern portion of the cemetery, Potters Field and some perimeter areas.

The practical purposes for surveying the Cemetery are to:

* Map the cemetery to allow people to find their way around it.

* Assess the possibilities for new burial sites on the property.

projects,” Geiss said. “It’s a relatively rare opportunity to contribute to a project as large as the Riverside Cemetery with such historical significance.” Geiss is a Bradford County native with broad, in-depth knowledge of the region.

As Towanda’s first public cemetery, founded in the early 1800s, the remains of many of Towanda’s earliest settlers and founders, such as William Means and David Wilmot, along with physicians, nurses, ministers, teachers, merchants, every day citizens, and even the last person hanged for misdeeds in Bradford County. Also interred are:

“Centrally located in Towanda, the Riverside Cemetery represents a significant portion of the

region’s heart and soul,” Rialland said. “We are pleased to contribute to plans to preserve and enhance the site.”

“The RCA’s plan is for the cemetery to evolve into a well-documented historic site furnished with way-finding aids, benches, shelters and upgraded landscaping,” Picou said. “Cultivated and well curated, the values and inherent beauty of the site will allow residents and visitors alike to enjoy this in-town asset more fully.”

Original cemetery burial records that have been digitized by the RCA also during the past two years are scheduled to be released in November, initially in conjunction with the Bradford County Historical Society. Additional burial statistics include:

The earliest recorded burial in the cemetery is that of John W. Bingham, who fought and died in the War of 1812 and died on Oct. 28, 1830, at age 33 years, 3 months, 7 days. wing to its longtime designation as a burial site, the Riverside Cemetery is not regarded as an archaeological site. However, it is likely that earlier burials occurred there before the cemetery was officially located.

The next step in the cemetery’s development is the production of a complete AutoCad map. With so many items, the report will be complex to produce. A timeline for its completion has yet to be determined. The ground-penetrating radar report is expected to be received by the Riverside Cemetery Association by the end of October. Repairs of the cemetery’s markers and maintenance of the property are ongoing.