By: Rick Hiduk
In: Opiate Epidemic
With: 0 Comments 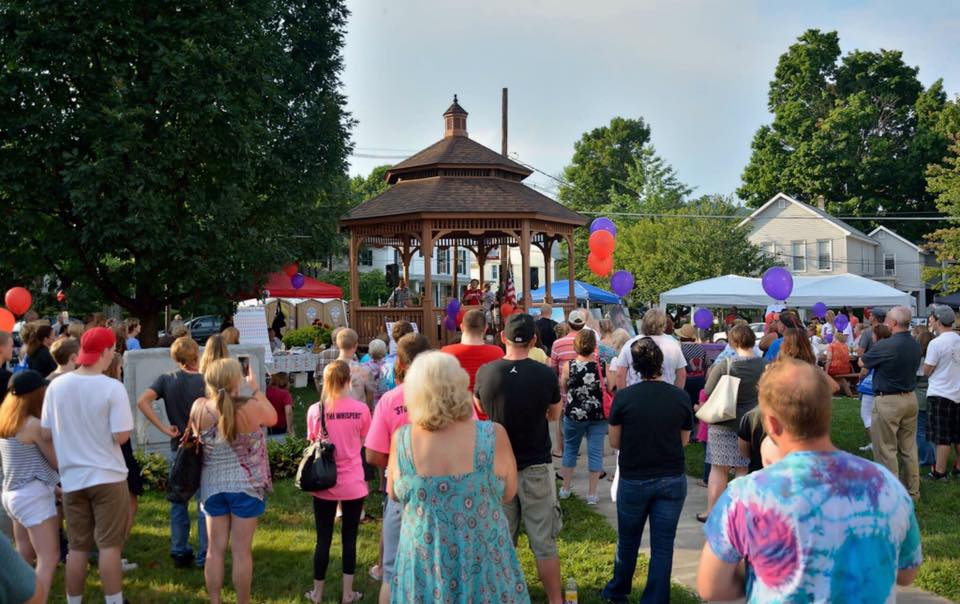 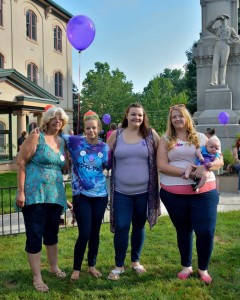 Family members of all ages gathered with friends to support the inaugural Not One More-Wyoming County Addiction and Awareness Rally held at the Wyoming County Courthouse on Aug. 11. The successful event has spawned additional awareness events, scheduled from now through October.

Organizers of the ‘Not One More’ Addiction and Overdose Awareness Rally held in Tunkhannock on Aug. 11 were energized by the hundreds of local residents who attended the event and are motivated to expand their visibility and outreach. Participants included members from like-minded organizations who are now working more closely to consolidate services and collaborate on new events.

Despite high humidity and the threat of thunderstorms, organizers estimate that between 300 and 400 people gathered on Courthouse Square to seek information from 30 vendors and hear 18 speakers share both the hard truths about addiction and overdoses and the hope shared by organizers for more accessible treatment programs and recovery resources.

“I was in awe of the turnout we got,” Celeste Kranick related. “It just goes to show you how much our community wants and needs this.” Kranick represented The Addict’s Mom at the rally.

“I believe that all of the speakers had an impact on the audience,” Sandy Vieczorek of Wyoming County Cares remarked. “Their stories were enlightening as well as emotional.”

It was a group of youths representing Breaking Ground Poets of Tunkhannock that seemed to make the most enduring impression on those in attendance. Mason Crawford, Olivia Romano, and Bobby Hunt recited original, powerful pieces that they had recently shared with an audience in Washington, D.C.

“They gave voice to conflict, anger, grief, and confusion of a generation that is witnessing unprecedented addiction and death rates among their peers with little to no response from government or the medical community.” said Vieczorek.

“The kids were great,” Wyoming County Commissioner Ron Williams agreed. “It’s hard to make me cry, but there were tears in my eyes several times.” He stood with fellow commissioners Tom Henry and Judy Mead to express the frustration of county leaders that more has not been done to curb the current opioid epidemic.

“I was very pleased with the support that we had,” stated event organizer Lizz DeWolfe. “A lot of questions were answered for the community.” She was also impressed by the energy brought to the event by partner agencies such as Wyoming County Cares, Young People in Recovery, A Better Today, and Luzerne/Wyoming County Mental Health Services.

Organizers appreciated the support of the county commissioners and the willingness of EMA Director Gene Dziak, Judge Russell Shurtleff, and District Attorney Jeff Mitchell to speak at the event. But not everybody was satisfied or convinced by the messages they brought to the rally. Concerns expressed via social media after the event indicate a continued uncertainty of how local officials are handling the epidemic.

It was always the intention of Not One More members and rally organizers to harness the energy of the event and move forward. The recent arrests and incarcerations of 20 county residents on drug charges has fanned the flames of mistrust and have spurred DeWolfe and others to continue the fight.

“There are better solutions than throwing addicts behind bars,” DeWolfe posted on Facebook, along with an invite for others to join her at a regularly scheduled meeting of the Wyoming County Commissioners on Tuesday, Aug. 23. “These people will sit there for months before being sent to treatment. It’s not fair to them or the taxpayers.”

DeWolfe and others have grown wary of courts that are “unwilling to consider alternatives to incarceration” and hopes to encourage the commissioners to take more aggressive action. The Wyoming County Prison has been overflowing for most of the past year, and new inmates are being housed at other facilities at a cost to county residents of more than $1,000 per day. The meeting begins at 9 am.

Next on the agenda for Not One More is a collaboration with Young People in Recovery, led by John Fabiseski, to staff a booth at the Wyoming County Community Fair, which runs from Wednesday to Monday, Aug. 31 to Sept. 5. Opening night of the fair coincides with National Overdose Awareness Day, and group members plan the release of 1,000 biodegradable purple balloons at 6:30 pm.

The two organizations will partner again on Sunday, Oct. 2 to host “Rocking Out Addiction – Rolling in Recovery” at Lazy Brook Park, east of Tunkhannock. The event will run from noon to 6 pm and will feature popular local bands such as Infinity and Hell Yo.

“I believe our rally and other grassroots events will inspire and inform people who suffer from the disease of addiction, as well as other family members, to seek help,” said Vieczorek. 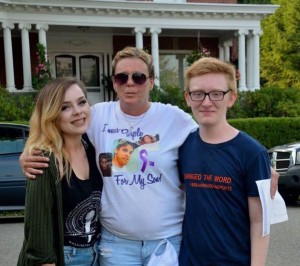 Local victims of drug overdoses were memorialized on bigger-than-life posters. 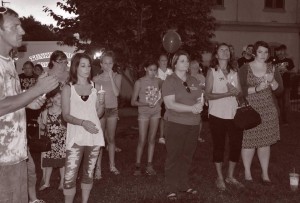 Some look skyward as an approaching storm threatens to dampen the candle light vigil that concluded the program. 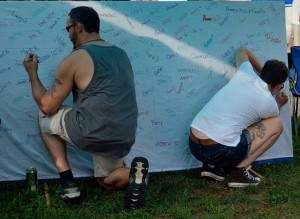 Young People in Recovery sponsored a banner on which rally attendees were encouraged to write the names of loved ones caught up in or lost to addiction. 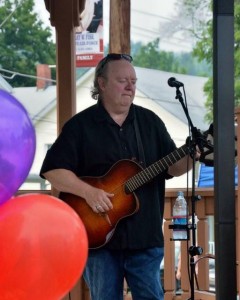 Guitarist Leland Smith provided music for guests as they arrived. 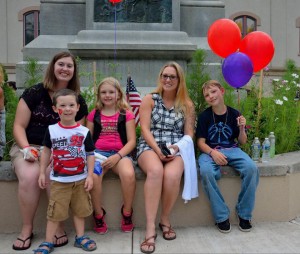