Tunkhannock Marks “River of the Year” at Riverside Park 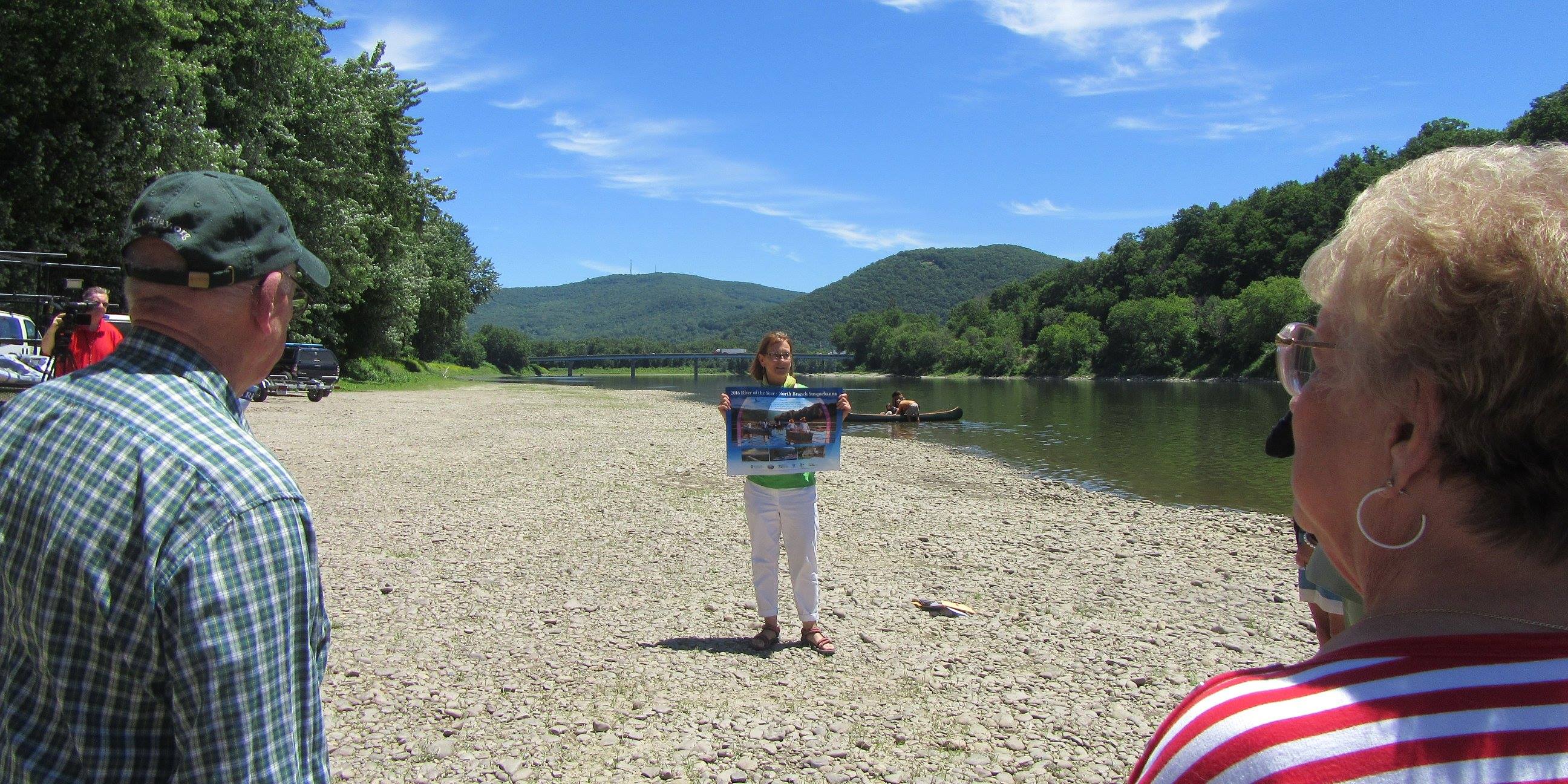 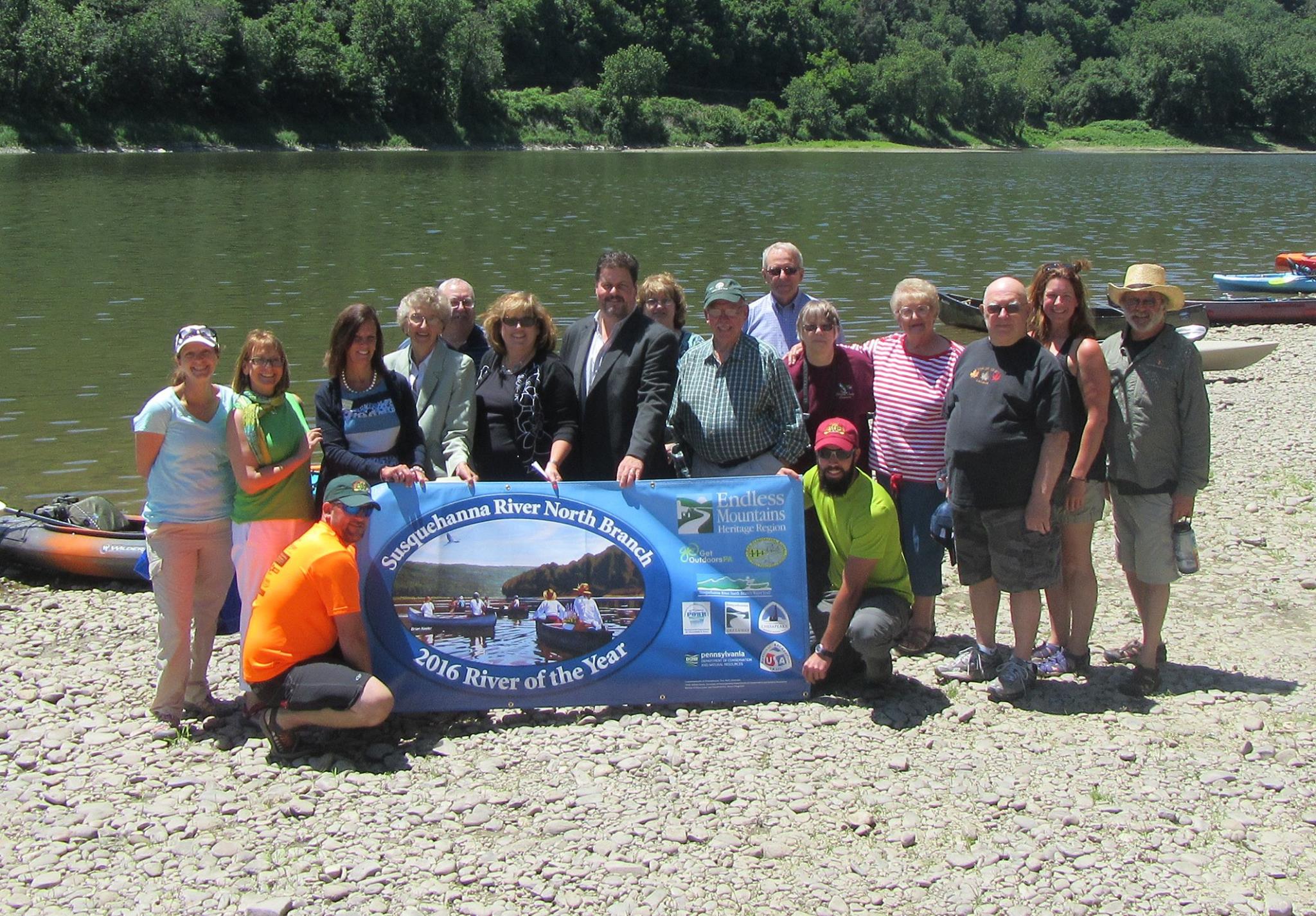 Endless Mountains Heritage Region (EMHR) board members, public officials, and two-dozen paddlers taking part in the five-day Endless Mountains Heritage Sojourn met in Tunkhannock on June 14 to celebrate the “2016 River of the Year” designation and mark the progress of Tunkhannock’s Riverside Park and the commitment of the community to maintain river access for recreation and heritage-based activities for its citizens.

Standing at the edge of the Susquehanna River at Tunkhannock, EMHR director Annette Schultz (top, center) welcomed the audience of nearly 60 people and explained the significance of the River of the Year award. The contest is conducted annually by DCNR and POWR (Pennsylvania Organization of Watersheds and Rivers), and the North Branch Susquehanna River was nominated by EMHR in partnership with the Susquehanna Greenway Partnership.

Schultz spoke of the importance of opening the river up to provide access for local residents and visitors for recreational activities and applauded Tunkhannock’s mayor, borough council, and Riverside Park Committee members for maintaining and expanding the park amenities since 1972. She also talked of the importance of stewardship and instilling that sense of responsibility in the youth of today.

Mayor Norm Ball noted that, as frustrating as it has been to see the park damaged by periodic floods, the community has always pitched in to clean up the mess and add something new. Park Committee member Carol Innamorati noted that the park is used year-round, owing to the popularity of an ice skating rink with local youths.

Her husband, Bob Innamorati, was happy to report that vandalism and littering in the park has decreased steadily over the years as the community has embraced it and learned to cherish it. “It’s used by more people all the time,” Mr. Innamorati stated. Indeed, as the ceremony proceeded, a number of boaters and anglers drove down the public access road and launched under the beautiful blue sky.

Special guests included DCNR Rep Kelly Rossiter and Leslie Cadden, District Outreach Specialist from Rep. Karen Boback’s office. Wyoming County Commissioners Tom Henry and Judy Mead related their love of the river and concurred with Schultz that attention to the waterway has made it an integral part of the county’s economy.

Among the visitors were Exeter Township Supervisor Rick Wilbur and Carol Bardzel of the Exeter Township Park Commission. Exeter Township is on the verge of a major expansion of its river park, and Wilbur said that he came to Tunkhannock to meet his like-minded counterparts and learn from them.

The media event was timed to coincide with a lunch stop for about 24 kayakers and canoers taking part in a five-day Endless Mountains Heritage Sojourn. For the first two nights of their adventure, they were shuttled back to Camp Lackawanna at Vosburg Neck where they enjoyed meals together and educational and musical programs in the evening to which the public was invited.

According to EMHR Greenways Coordinator David Buck, the paddling/camping trip was designed to put participants in touch with the natural beauty of the North Branch, as well as its history and environmental attributes. Topics of discussion planned for the five-day journey included the river’s health and wildlife that depend on the river.

For more information about upcoming River of the Year events, including paddling opportunities for the public, log on to www.endlessmountainsheritage.org. 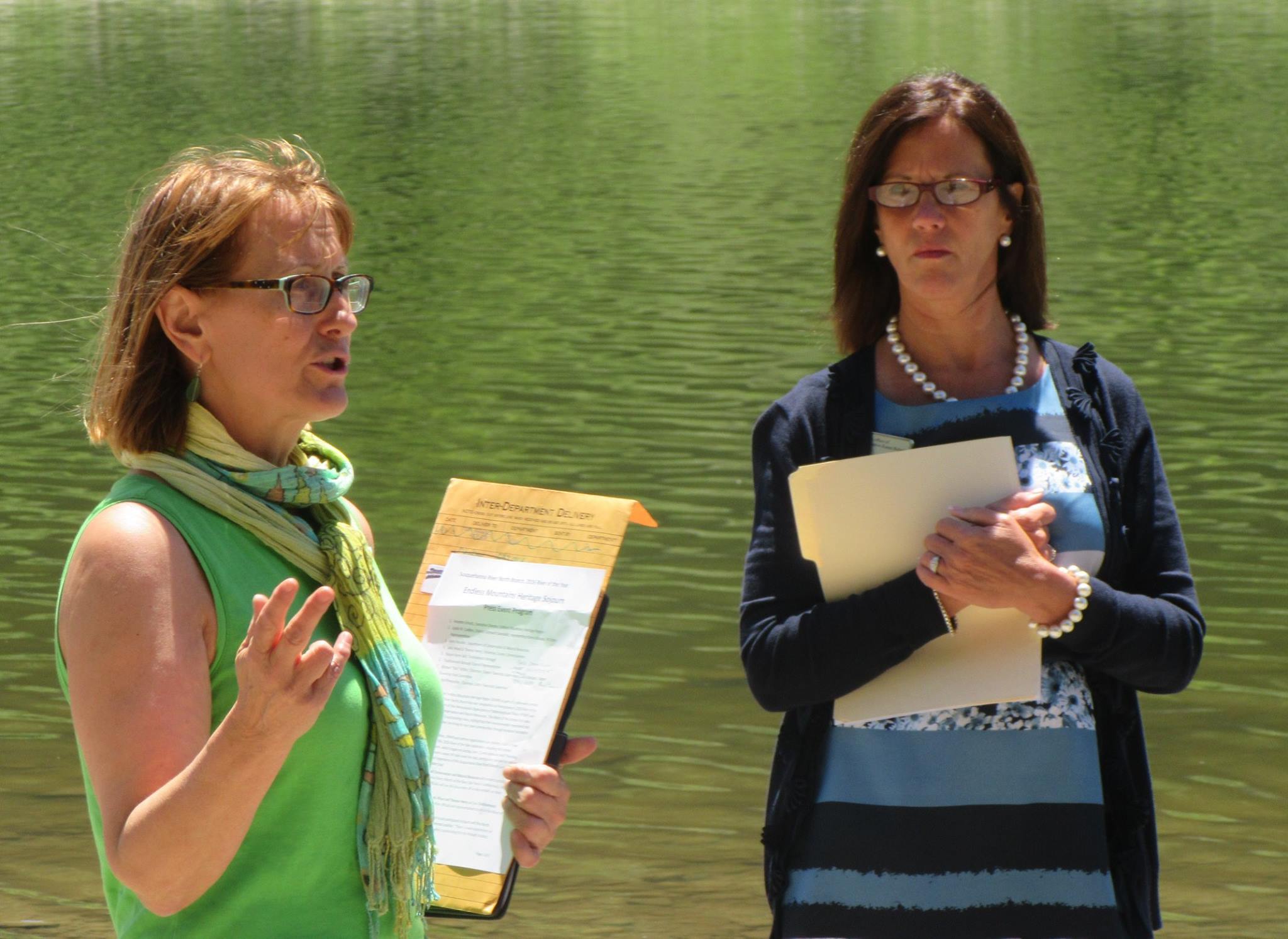 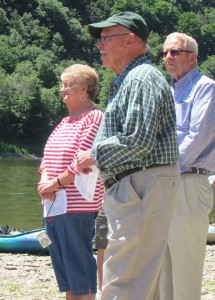 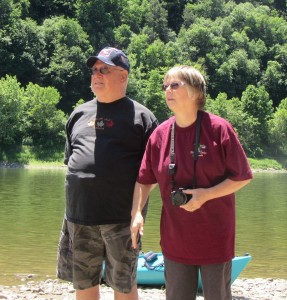 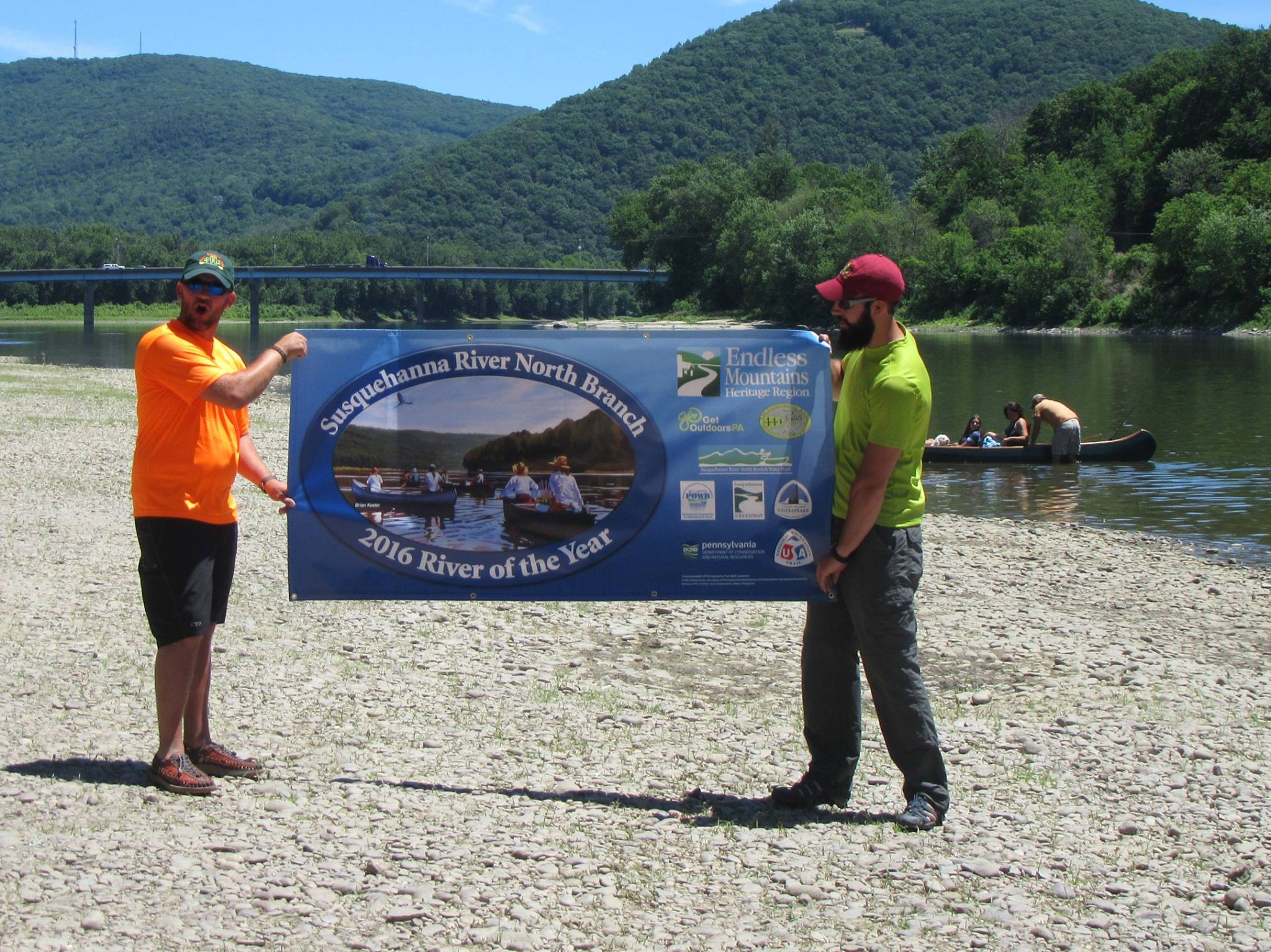 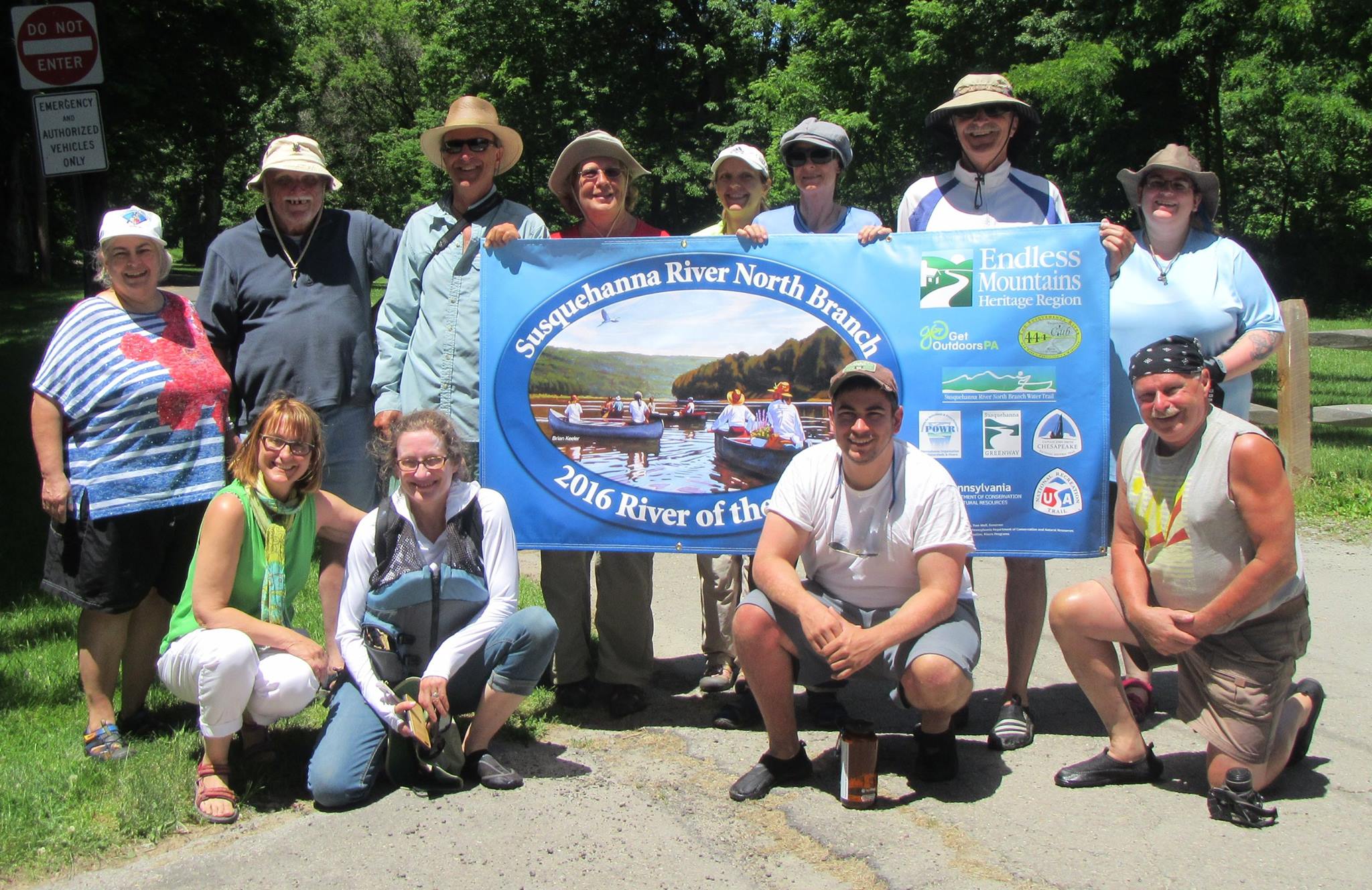 Participants in the Endless Mountains Heritage Sojourn get their turn with the River of the Year banner.