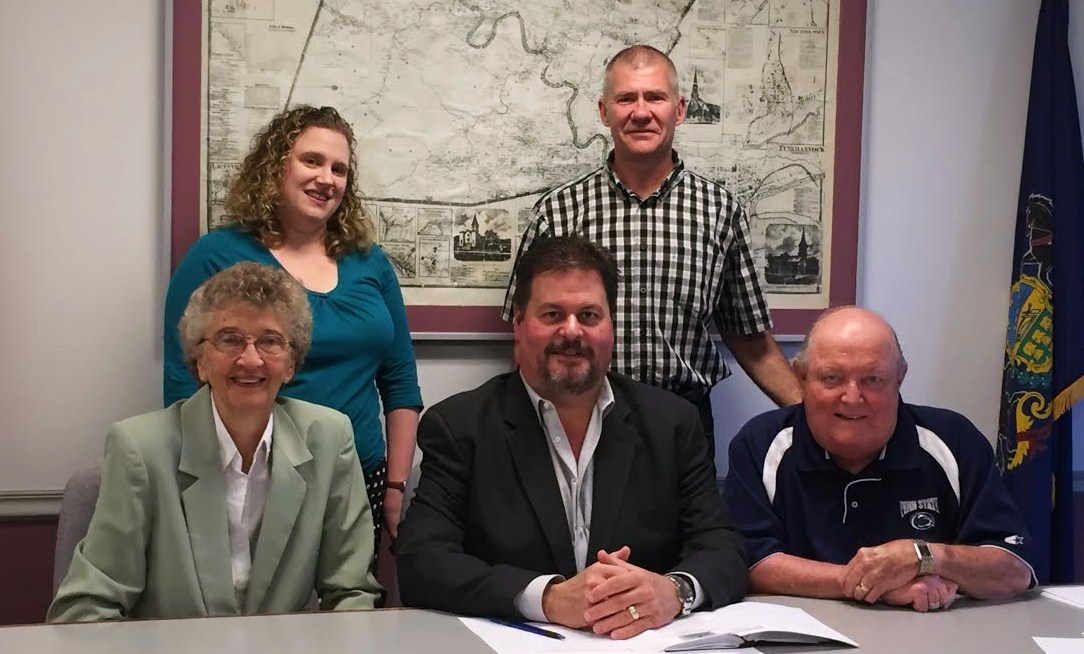 During a regular biweekly meeting of the Wyoming County Commissioners, Commissioner Judy Mead read aloud a proclamation extolling the benefits of the new Historic Tunkhannock Walking Tour. Attending on behalf of the tour committee were Erica Rogler, director of the Wyoming County Cultural Center at the Dietrich Theater and project coordinator Rick Hiduk of Endless Mountains Media Services.

Afterward, Henry remarked that seeing so many organizations come together for such an undertaking was impressive. Mead is a member of the tour group committee and provided some background as how the original walking tour brochure was put together around 2000 with some Penn DOT funds leftover from the construction of the Tunkhannock Bypass. “We had to do something for the town,” she recalled.

While the need to update the old brochure was the impetus for the new project, Hiduk related that the scope of the project was expanded when committee members saw the potential in the promotional materials that Hiduk and graphic designer Diane Turrell brought to the first meeting.

“From there, the project mushroomed into something bigger than any of us could have imagined,” he told the commissioners.

“It truly was a community effort,” Rogler concurred.

In addition to the 24-page, full-color booklet featuring a centerfold map and historical snippets, an exhibit of six of the 40 featured structures on the tour has already opened at the Dietrich Theater. A historical presentation featuring six speakers slated for 11 am on June 25 will serve as a kickoff for guided tours, which will begin and end at the Dietrich Theater. Guided tours will continue via registration through the theater on Thursday evenings in July.

To reserve a seat at the presentation or a time slot with a tour group, interested readers should call 570-996-1500.

The proclamation read as follows:

Whereas, The Wyoming County Commsssioners do hereby proclaim the new Historic Tunkhannock Walking Tour to be a great heritage resource for all of Wyoming County amd visitors as it brings people closer to the buildings, people and history of our County Seat.

Whereas, We do hereby encourage residents from Wyoming County and beyond to participate in the guided walking tours on June 25, 2016 and on Thursday evenings in July, or a self-guided tour, as these tours promote recreation, education, respect for the deep history of the community and and opportunity to better understand how our County Seat has eveolved and what it has to offer.

Now, Therefore, We, the Wyoming County Commissioners, proclaim the June 25 and Thursday evenings in the month of July 2016 as the Historic Tunkhannock Walking Tour.