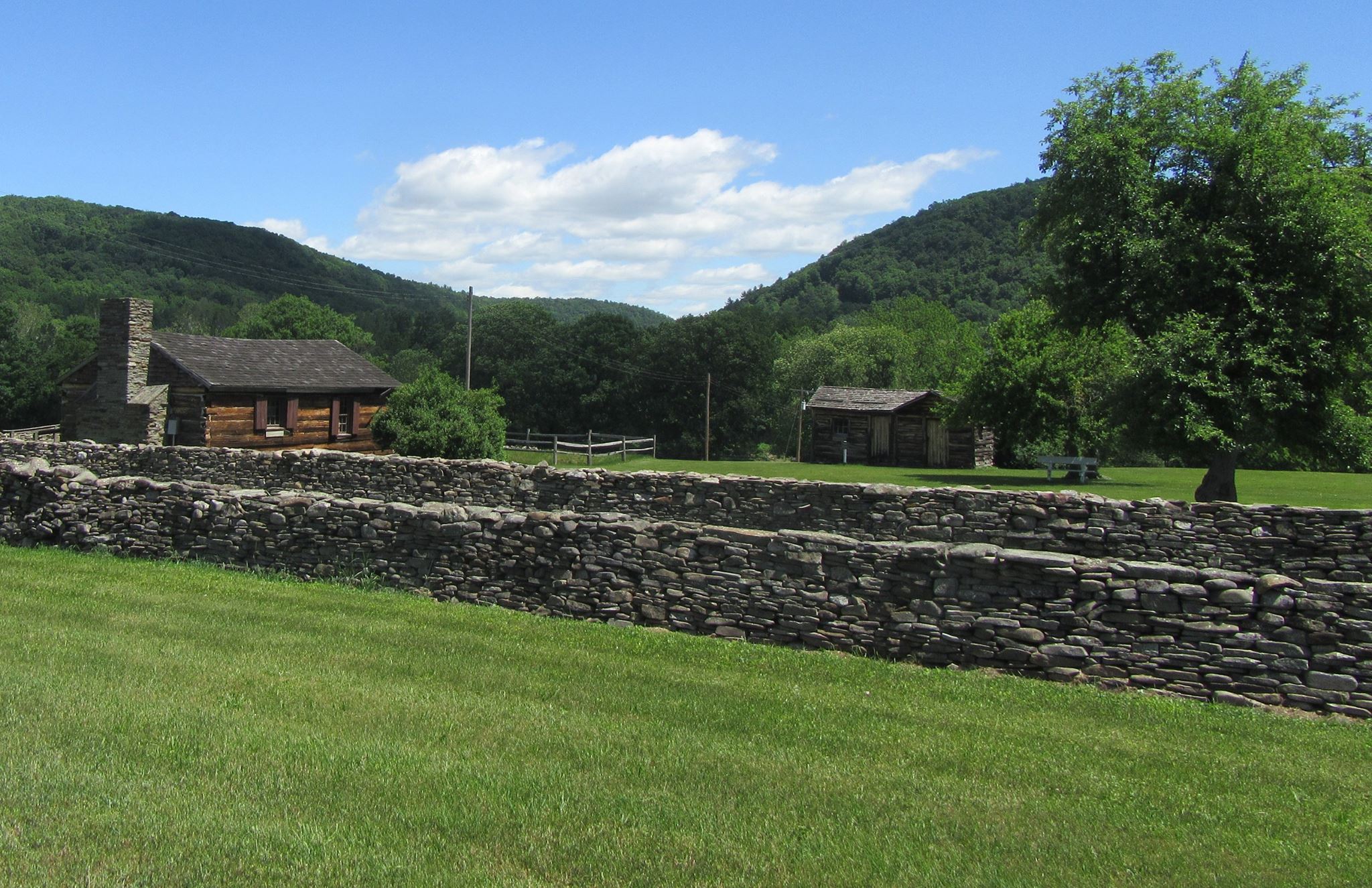 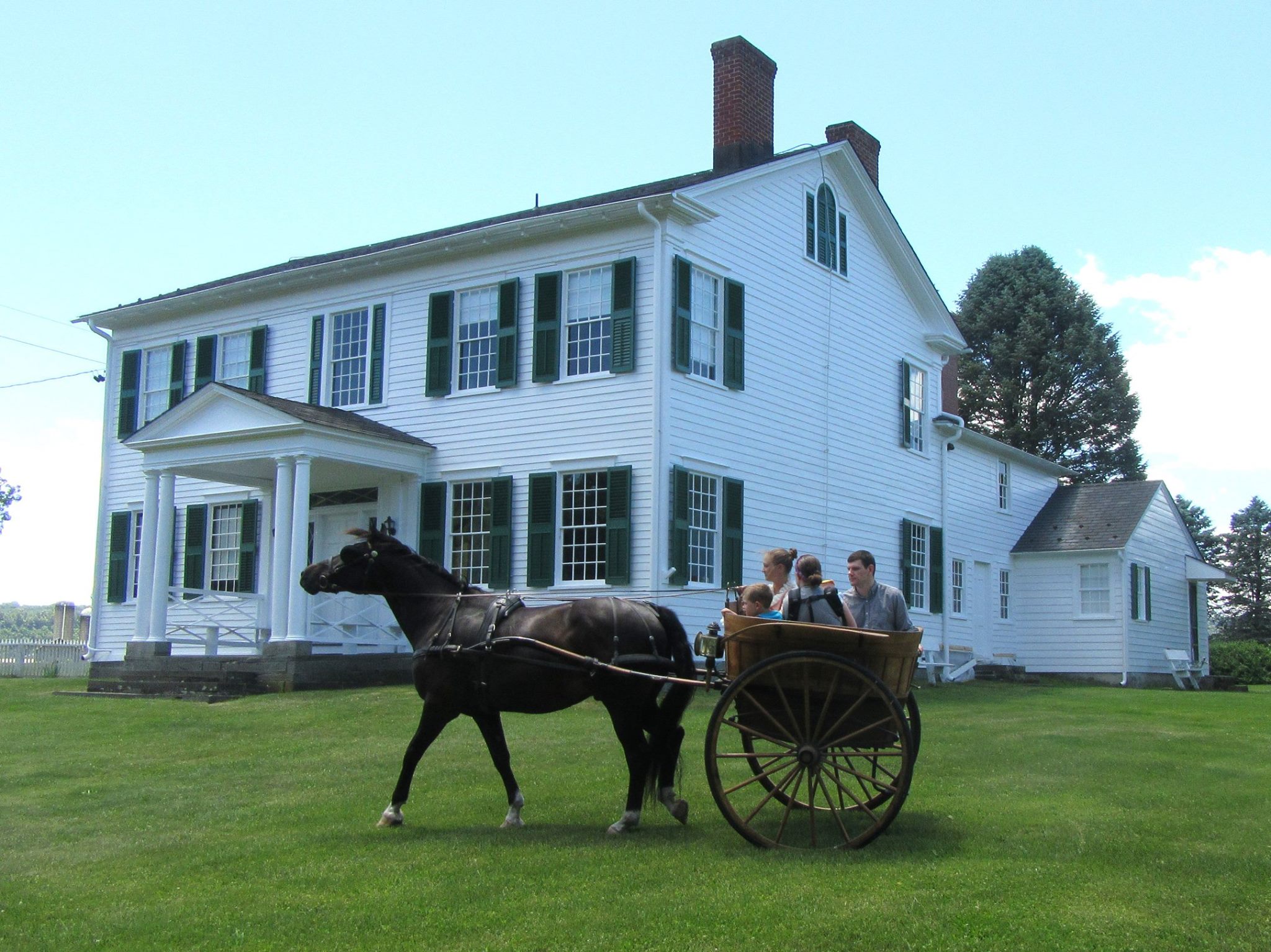 A horse-drawn carriage ride around the grounds of the French Azilum Historic Site was just one of many activities for families to enjoy during a Living History Weekend conducted by the Endless Mountains Primitive Outdoorsmen on June 11 and 12. There are numerous family-friendly events on the schedule for the remainder of 2016.

The staff and volunteers at French Azilum Historic Site in Bradford County welcomed the Endless Mountains Primitive Outdoorsmen (EMPO) to their grounds in Asylum Township from June 11 and 12 to stage a Living History weekend. EMPO members exhibited a range of centuries-old skills and portrayed a variety of characters that would have traveled through or made the Endless Mountains region their home between 1740 and 1840.

“The weekend was a big success,” said Roxy Wells of New Albany, who serves the French Azilum board as treasurer and helped to organize the event as a member also of EMPO. “The Living History Weekend was a good fit for French Azilum.”

Activities included archery, tomahawk tossing, horse-drawn carriage rides, guided tours of the Laporte House and self-guided tours of the remainder of the grounds, including several cabins and the blacksmith shop behind the Laporte House. EMPO demonstrations included fire starting, blacksmithing, open hearth cooking, hunting implements and hides, blanket weaving, how to make a quill pen, and variations on camping accommodations that would have suited each individual’s needs.

“They loved the fact that it was a family event, and all ages could be involved,” said French Azilum site manager Lee Kleinsmith. “Many of the moms enjoyed knife and ax throwing.” 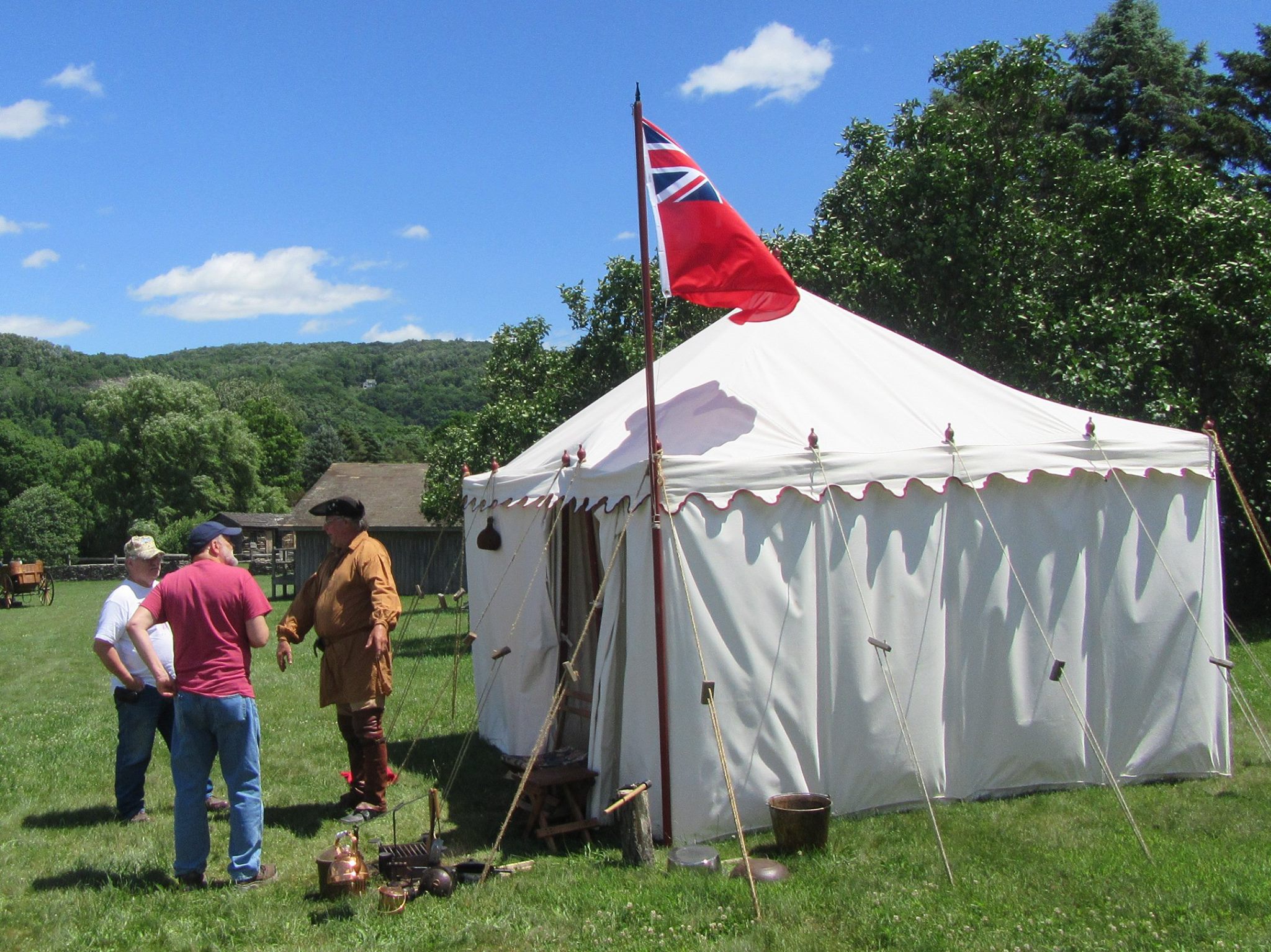 Joe Ling, portraying a 1760s British army ranger (above), explained that the group of nine tents was not meant to depict typical encampments from any particular era. “We are all doing our own thing,” he remarked, noting that his two-room canvas “bungalow” was representative of a British officer’s quarters during the time leading up to the American Revolution. 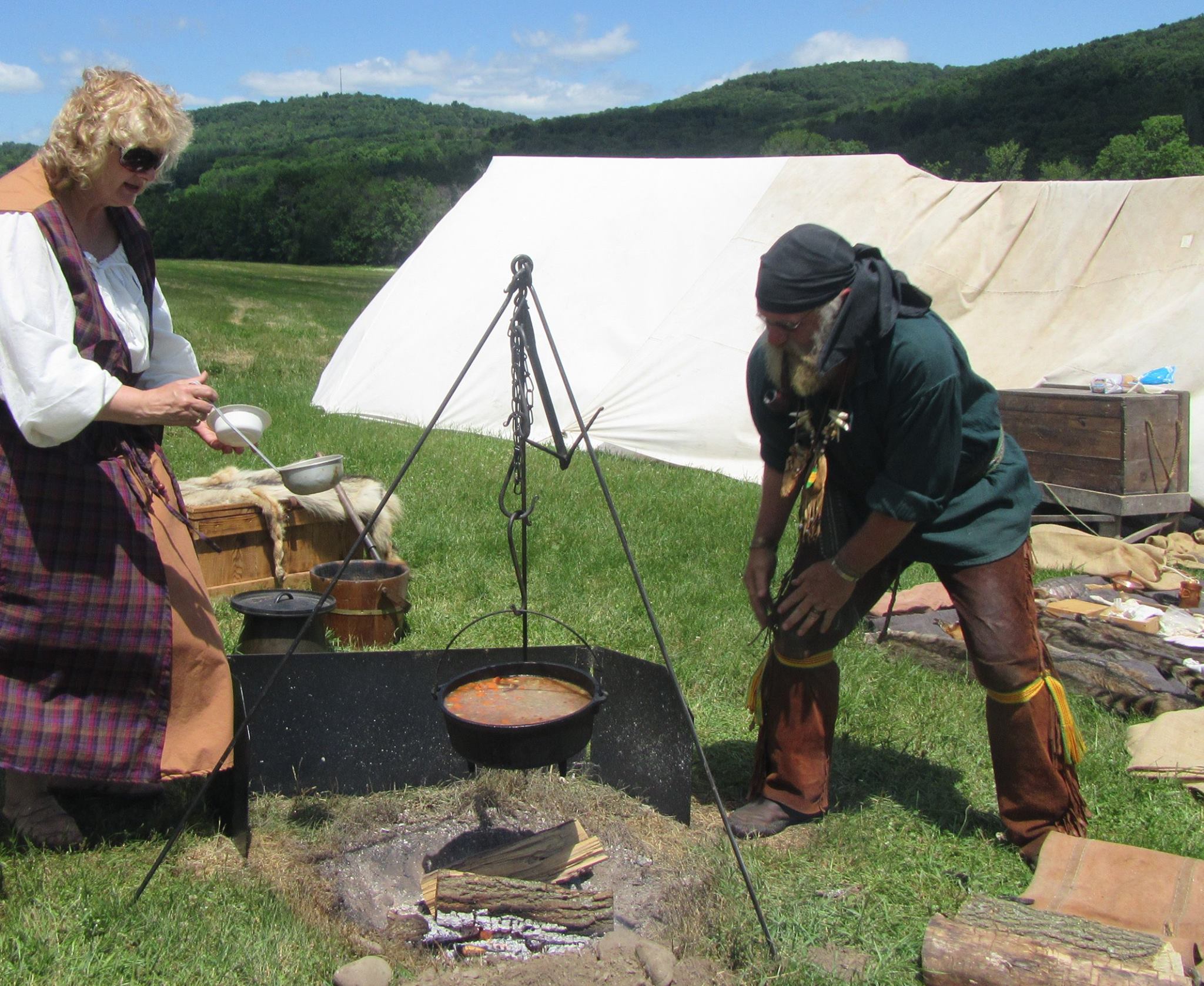 Roxy and Dave Welles (above) of New Albany erected a dwelling and displayed items that would have been more common of a family of hunters and trappers. Their sleeping tent was barely noticeable, attached to a roomy, semi-enclosed cooking and seating area. Roxy served beef vegetable stew from an iron pot to guests and fellow EMPO members.

Dave’s tanned furs, which included fox, coyote, bear, mink, fisher, and bobcat, were a big hit with the children. “They’re always surprised at how soft they are,” Dave noted. Visitors also had a lot of questions about Dave’s collection of black powder-fired weaponry, including a musket-ball pistol. 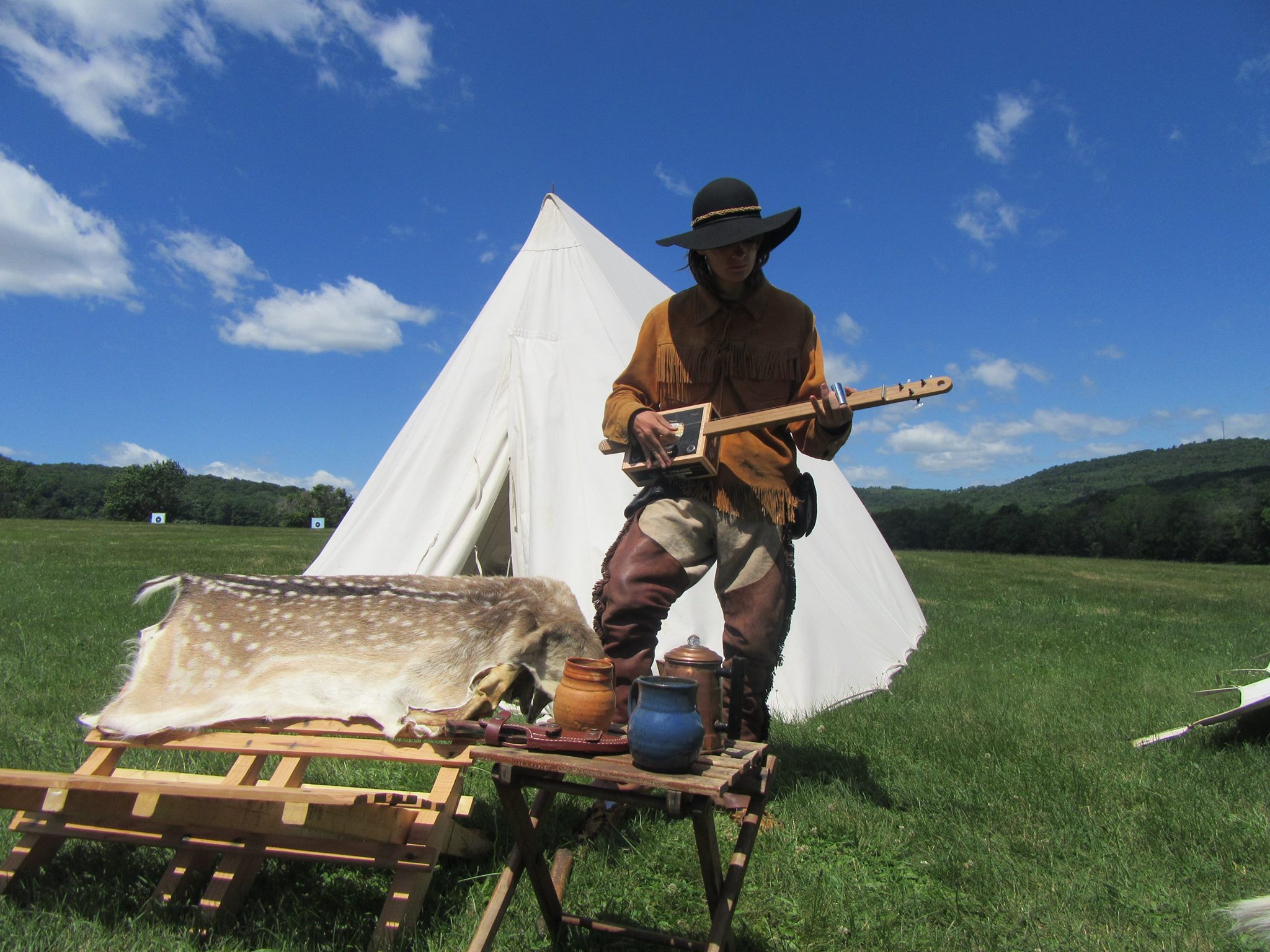 Farther down the row, Cody Johnson’s family’s side-by-side tents reflected the more meager needs of a migrating frontier family on a hunting trip. Cody (above) had acquired and was learning to play a cigarbox guitar made by Justin Haas from Dushore, who also forged and gave away metal hooks to event patrons. His wife, Kristin Haas, charmed family members of all ages by jockeying a reproduction carriage pulled by a horse name J.L. around the grounds.

“One man told me that he couldn’t believe how smooth the carriage rides were,” Kleinsmith related. 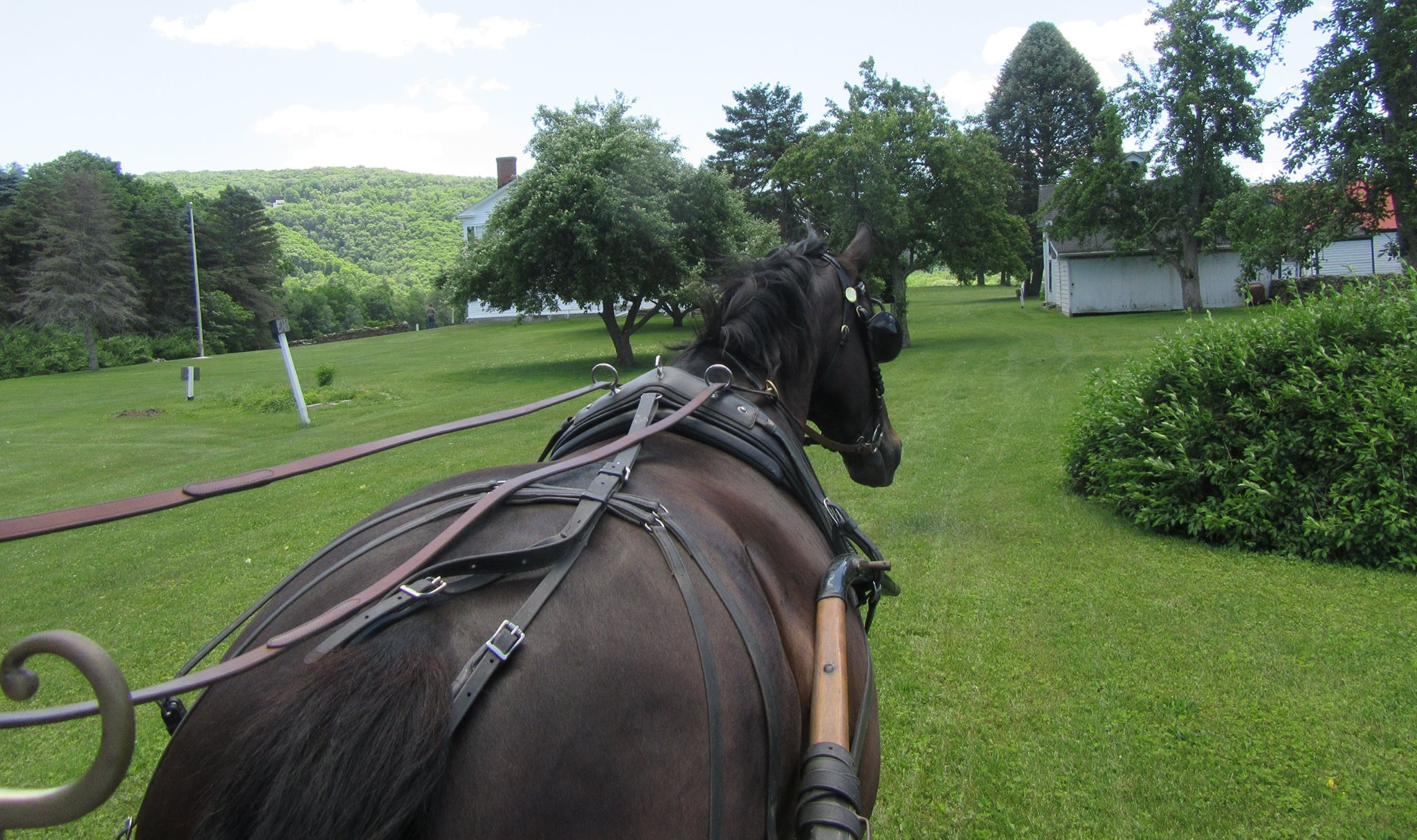 The horse-drawn carriage towing one family after another was a site to behold as it crossed the front lawn of the Laporte House, where large groups gathered on the hour for guided tours of John Laporte’s summer mansion conducted by Kleinsmith and Deborah Courville. The house boasts many authentic artifacts and clothing from the early 1800s that belonged to both Laporte’s family and to their historic neighbors, the Homets. 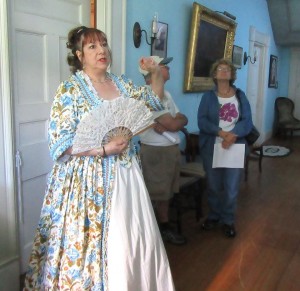 “Our goal is to be family-friendly,” said Kliensmith. “We want parents to bring their children to our site so they become interested in history. They are our future, and we need to instill that curiosity now.” 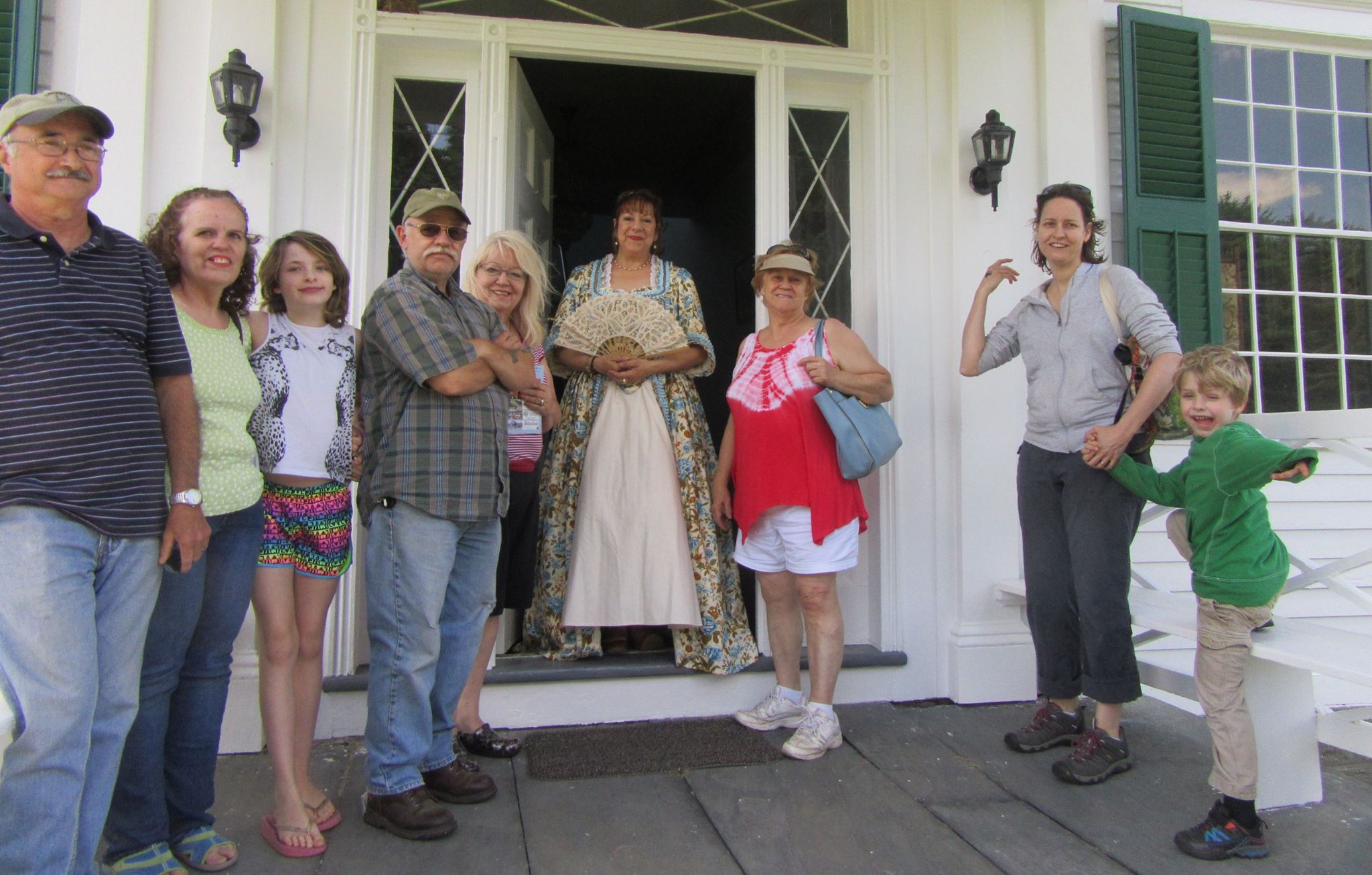 Volunteer tour guide Deborah Courville (center) greets visitors to the Laporte House at French Azilum prior to a guided tour of the 1830s mansion. 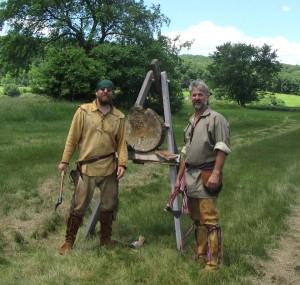 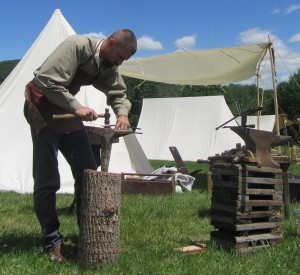 Justin Haas of Dushore forged hooks and other items from metal during ongoing demonstrations at French Azilum on June 11 and 12.