DCNR Secretary Kicks off ‘River of the Year’ in Sayre

By: Rick Hiduk
In: River of the Year
With: 0 Comments 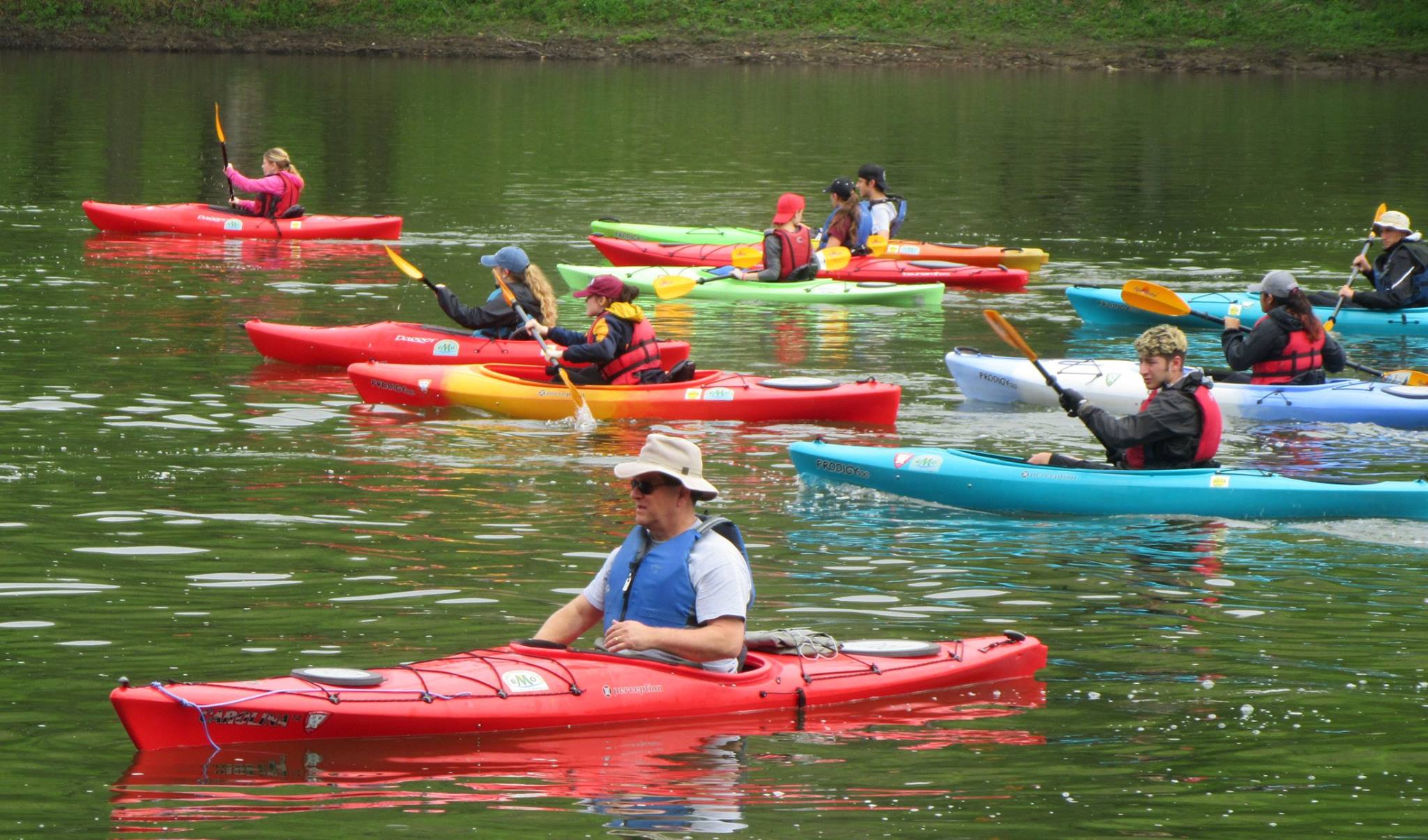 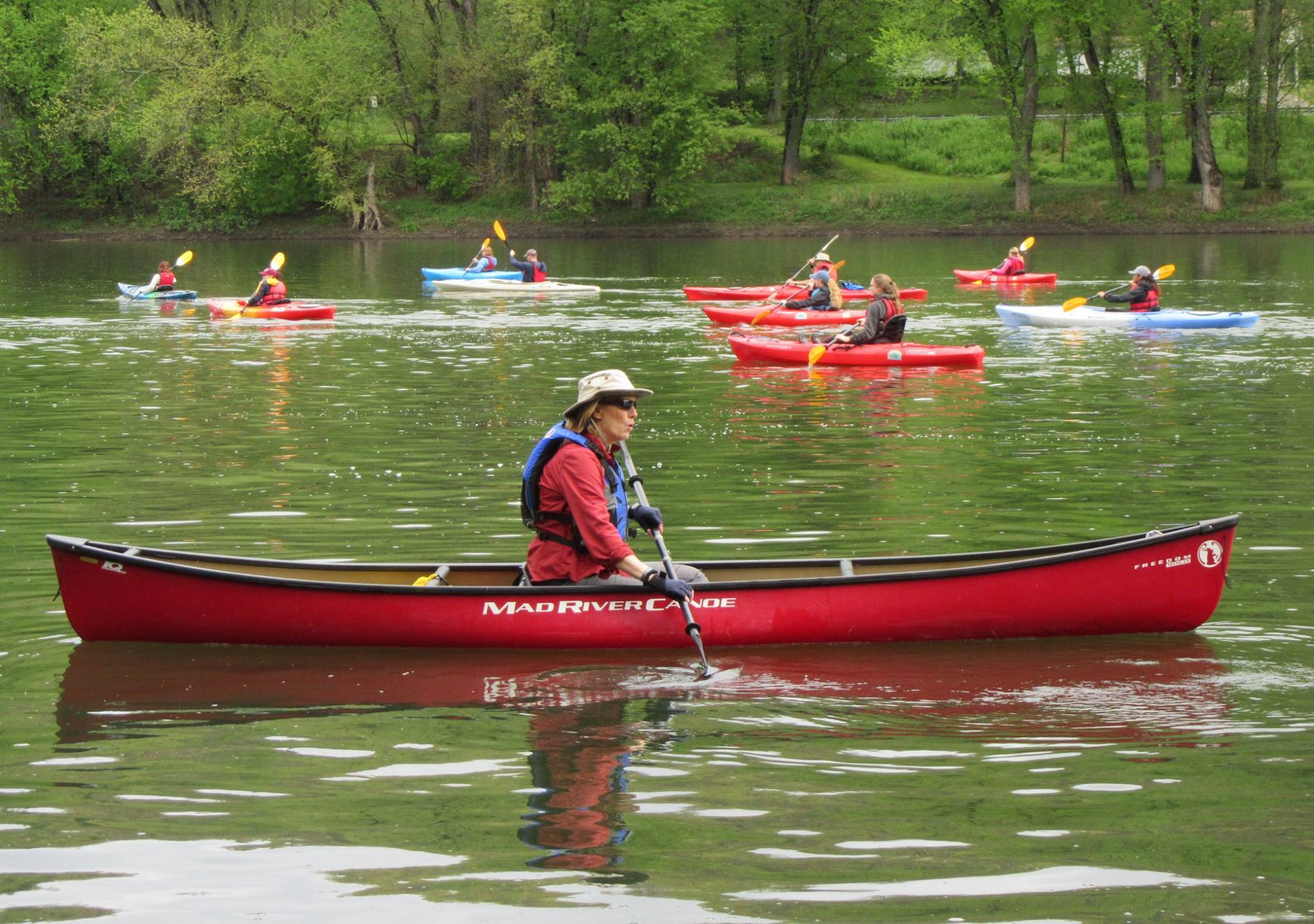 Bradford County Commissioner Ed Bustin (top) and DCNR Secretary Cindy Adams Dunn (above) take to the Susquehanna River on May 13 to escort approximately 50 students representing seven high schools from Sayre Riverfront Park to Larnard Hornbrook Park in Sheshequin Township. Dunn was in Bradford County with other elected officials to kick off the ‘2016 River of the Year’ celebration for the North Branch Susquehanna River.

Stormy skies parted just in time on May 13 for a three-day sojourn marking the ”2016 River of the Year’ celebration to begin as planned from Sayre’s Riverfront Park in northern Bradford County. Representatives from the Pennsylvania Department of Conservation and Resources (DCNR) and the Pennsylvania Organization of Watersheds and Rivers (POWR) were on hand for the event, as were other elected officials and representatives of the Endless Mountains Heritage Region (EMHR).

DCNR and POWR coordinate the contest each year, and EMHR sponsored the North Branch Susquehanna River, which handily beat five other nominated waterways in the Commonwealth via online voting at the end of 2015. 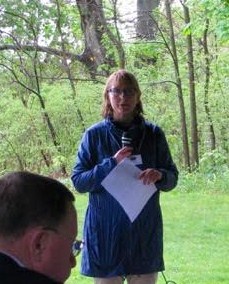 “This is the beginning of a three-day kayaking event for you to get to know one of the region’s great recreational and historical assets,” said Schultz. “We are responsible as stewards of our river as those who came before us, and you will be the next generation of river stewards.” 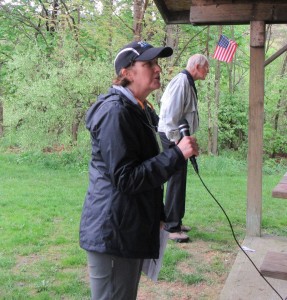 After sharing with Sweeney the impetus behind the annual River of the Year contest, Dunn directed most of her comments at some 50 students and chaperones who were anxious to set in at the public boat launch and begin a three-day paddling and camping journey to Sugar Run called the “Heritage Adventure Sojourn.” 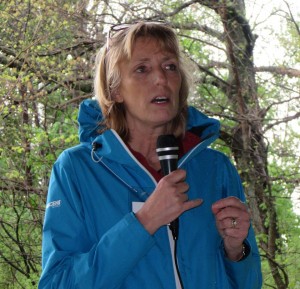 “What a hub and mecca this was for the Iroquois people,” Dunn (above) said of the concentration of Native Americans who inhabited the Sayre/Athens area well into the 1700s. “Today, you are going to experience the river much as they did – from the water.”

Dunn related that she has been paddling the Susquehanna River for many years from its headwaters at Cooperstown in New York state to the Chesapeake Bay. Separating herself from the official capacity that brought her to the event, Dunn said that, as a self-proclaimed “river rat,” the North Branch Susquehanna is one of her favorite stretches of river. 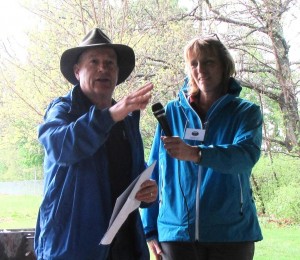 An elite group of people who have paddled the 444 miles of the North Branch can join the 444 Club, which is sponsored by EMHR. Dunn invited James Twigg to microphone (above) and gave him a framed certificate acknowledging his completion of the feat in 1966 at the age of 16. He also accepted a membership award on behalf of the late Russell Chaffee, who swam the entire length of the river 50 years ago. Twigg had escorted him in a canoe.

Commissioner Bustin (below) spoke of the importance of promoting and expanding access to the river while remaining good stewards of the waterway. “Our culture grew from this river. Somehow we’ve moved away from that,” he told the youths in attendance. “These sojourns and the contest are important to tie us back to that.” 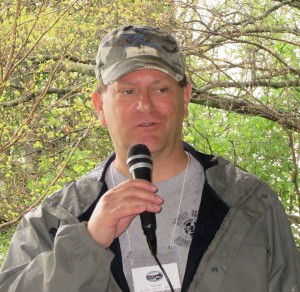 Towanda Area High School students Zelia Beauchemin and Jarod Boardman spoke of their enthusiasm about the sojourn, noting that they have lived along the shores of the Susquehanna River for their entire lives and, like so many other people, have taken it for granted.

“I’ve been on the river with my uncle and dad, fishing and tubing,” Beauchemin remarked. “But I’ve never really had anyone who knew the roots and history. I’m really excited to learn about it.”

Bustin also credited Sayre and Athens, who collaborated in 2015 for official River Town status, for improving public access to the river and making it an asset to the communities. 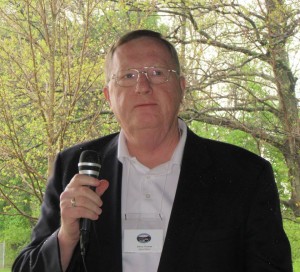 Sayre Mayor Denny Thomas (above) and Diahoga Trail representative Todd Babcock (below) noted that much of the riverfront work that has been done so far is part of the recovery from the flooding in 2011 that devastated the area. Residents were asking for more recreational opportunities involving the river, Babcock explained. With assistance from DCNR and EMHR, he has been working with Sayre and Athens officials to improve the trail line from Athens to the New York state border. 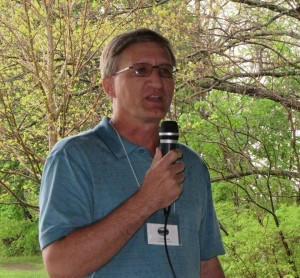 The event concluded with Dunn and Bustin getting out on the river with the students as the rain ended and the sun came out. After a safety talk provided by Towanda teacher Keith Brown (below), the large group began paddling toward Larnerd Hornbrook Park. On Sunday, they reached Sugar Run below Wyalusing and worked on presentations that were shared with the public at Wyalusing High School. 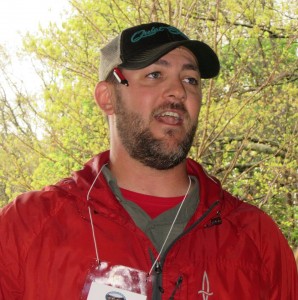 To learn more about the Endless Mountains heritage Region and 2016 River of the Year, log on to www.EndlessMountainsHeritage.org.

ADDITIONAL PHOTOS FROM MAY 23 KICK-OFF EVENT: 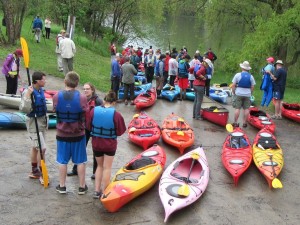 Students from seven area schools prepare to set into the North Branch Susquehanna River at Sayre (above) to kick off the ‘2016 River of the Year’ celebration and partake in a three-day educational paddling trip. 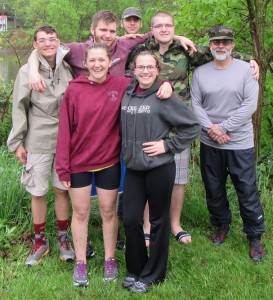 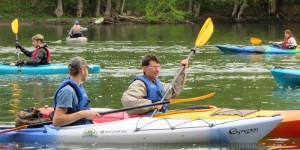 Dan Evans and Evan Brown (foreground) keep pace in the Susquehanna River at the Sayre Public Access while the rest of some 70 students and teachers set in for a three-day paddling trip. 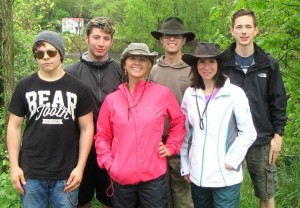 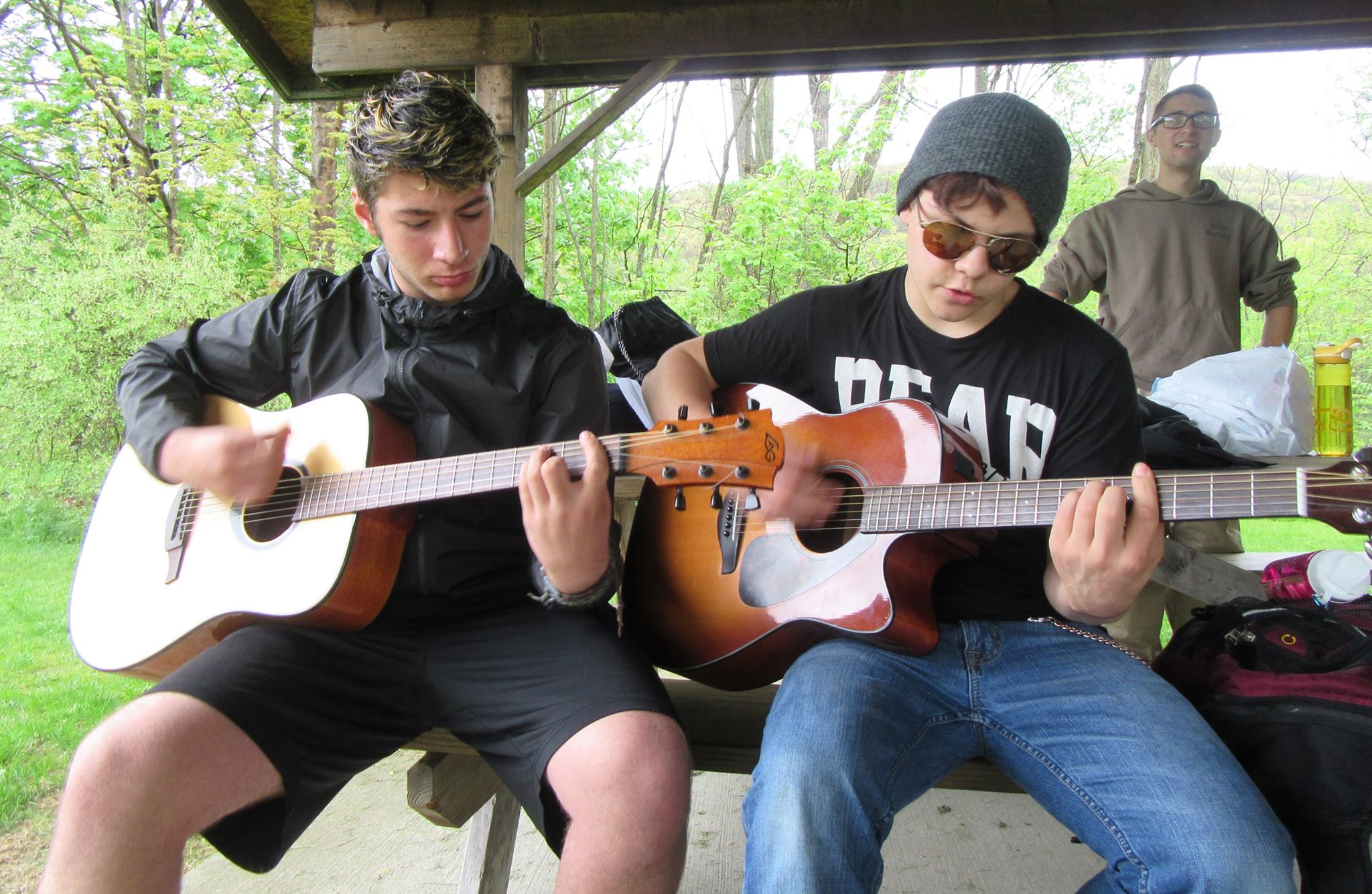 North Rome Christian School students Avery Klees (left) and Joey Bowes entertained students and guests at the River of the Year kickoff event in Sayre on May 13. Students were encouraged to bring instruments to entertain each other during a three day paddling trip on the North Branch Susquehanna River.

Representing Tunkhannock Area High School at Friday’s kickoff of the ‘2016 River of the Year’ student sojourn were (from left) Russell Kutish, history teacher Gloria Shebby, Maggie Toczko, Morgan Manglaviti, John Shebby, Chris Bach, and biology teacher Karen Kutish. The group paddled from Sayre to Sugar Run in Bradford County over the course of three days and two nights and concluded with the trip by sharing highlights of their adventure during a public program at Wyalusing High School on Sunday. 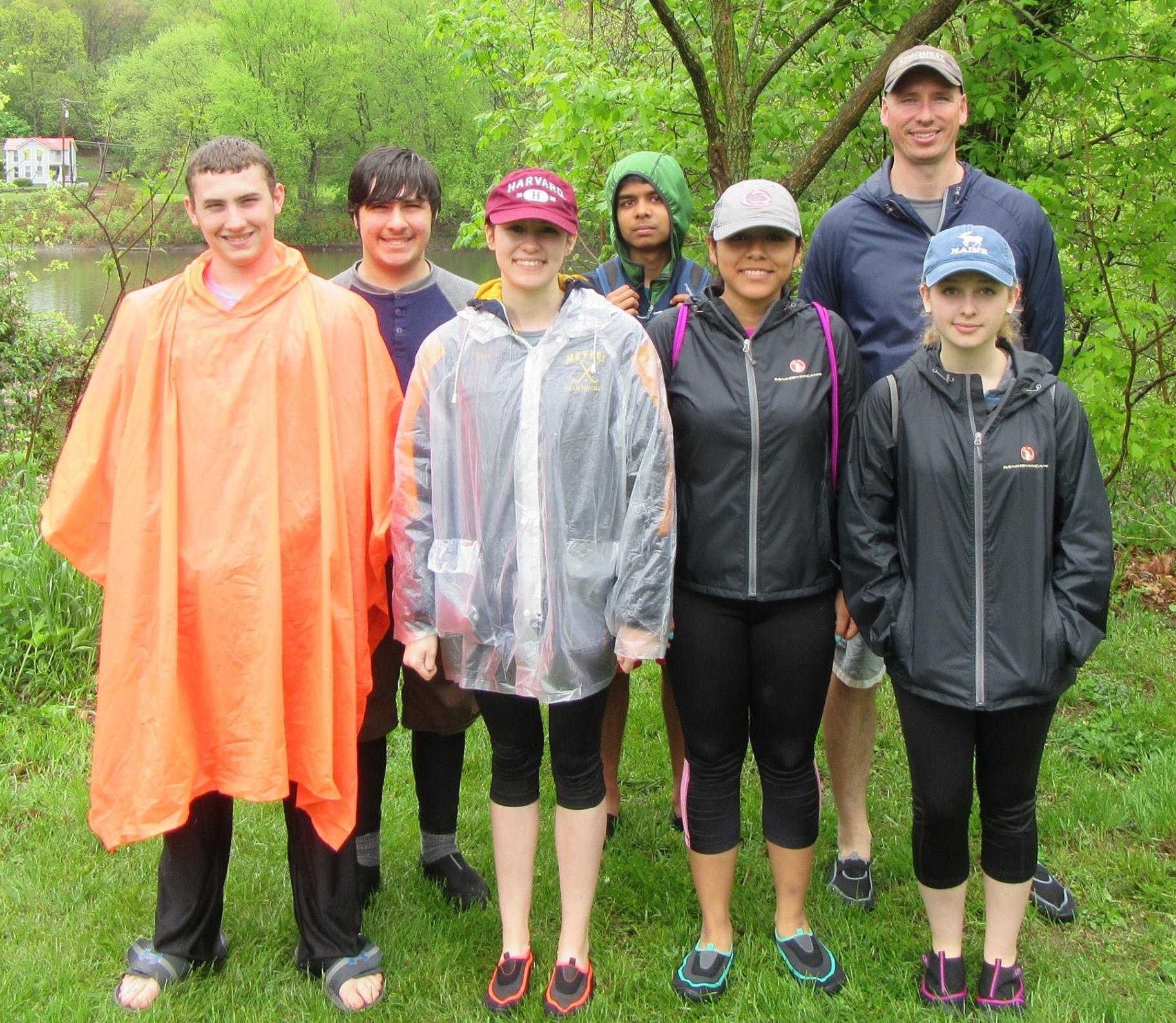 Wilkes-Barre STEM Academy students (front, from left) Michael Simon, Elsa Romero, Kelsey Flores, Gabby Nichols, (back) Ted Donlavage, Vedant Prasad, and engineer design teacher Keith Eberts were among about 70 participants in the Heritage Adventure Sojourn sponsored by the Endless Mountains Heritage Region as a the kick-off for the ‘2016 River of the Year’ campaign. 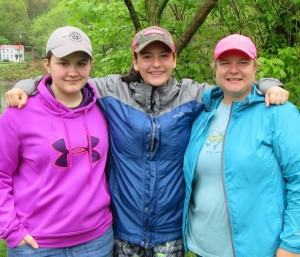 Wyalusing area residents (from left) Isabelle Allen, Emily Champluvier, and Tina Champluvier disembarked from Sayre’s Riverfront Park on May 13 along with representatives of six other schools. They were later joined on EMHR’s Heritage Adventure Sojourn by (not pictured) Katie Meeh and Makayla Voda. 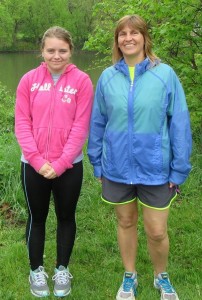 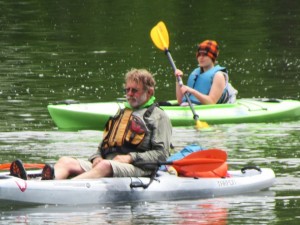 EMHR Greenway Coordinator David Buck (above) waits in his kayak for 70 students, teachers and other paddlers to set in to the North Branch Susquehanna River for the first leg of an educational sojourn from Sayre to Sugar Run. 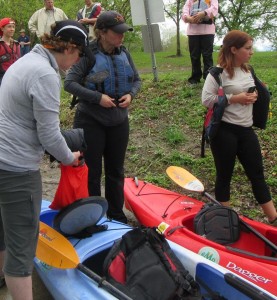 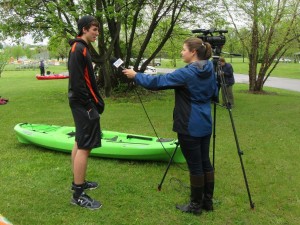 Towanda High School students Jarod Boardman and (not pictured) Zelia Beauchemin were featured in a WENY news story about the ‘River of the Year’ event.