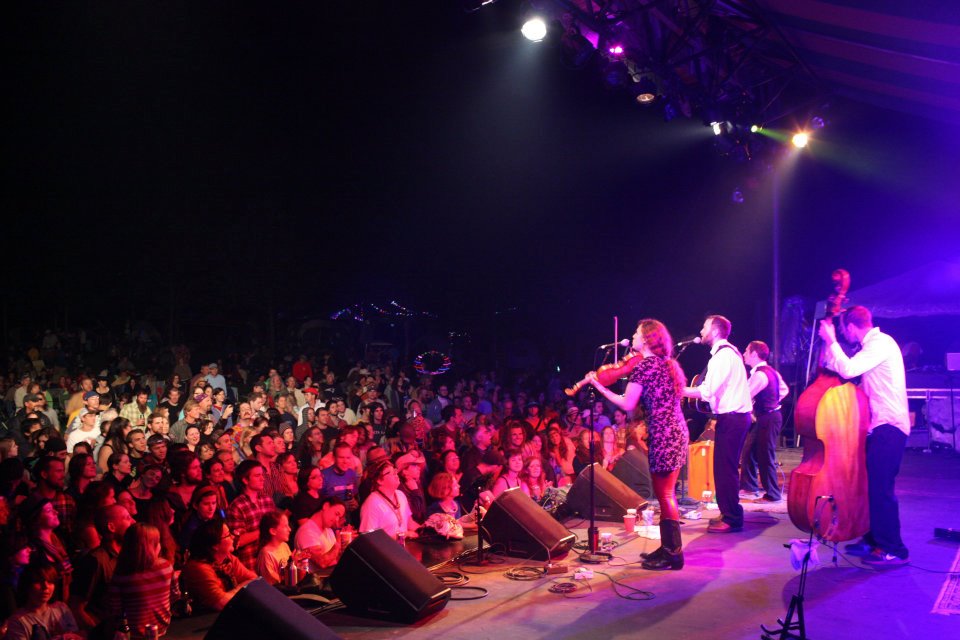 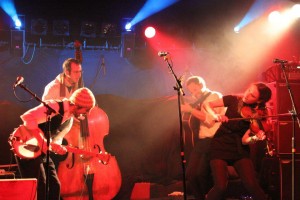 Driftwood from Binghamton, NY, will be one of the headliners on the Progressive Stage at the NEPA Bluegrass Festival this year, with shows scheduled at 5 and 9 pm on Friday, June 3.

One of the regional bands slated to return to the NEPA Bluegrass Festival in Tunkhannock this year is Driftwood, a four-piece ensemble that draws from a variety of musical influences to round out a unique Americana folk rock repertoire.

“As it is for many bands these days, they are full of many different styles,” said Driftwood bass player Joey Arcuri in a recent interview. “It’s hard to categorize most bands, and we have that going on as well. As individuals, we all had our own tastes in music growing up.”

Dan Forsyth and Joe Kollar formed the band in 2005, Forsyth playing guitar and Kollar handling the banjo. Both supplied vocals. Six years ago, they recruited Claire Byrne to play fiddle and add female vocals to Driftwood’s evolving sound. Arcuri has been with the band for just four years, when Driftwood’s original bass player took up a new career in the sciences.

“I was in the right place at the right time,” he stated.

Arcuri is pleased with the direction that the band has taken in the past few years, between the recording of their third, self-titled album in 2013 to plans for a new album to be released in late 2016. “It’s more singer, song-writer than the jam based funk that they were doing before.”

Though largely influenced by Old Crow Medicine Show, the Horseflies, and the Highwoods String Band, Driftwood considers themselves a folk band with a variety of influences.

“At first glance, you say, ‘this is a bluegrass band,’” Arcuri explained. “Although we have some bluegrass grooves, (Forsyth and Kollar) wanted to do folk art with blue grass styling, and I have a funk and jazz influence. Claire has a genuine passion for old time music, and you can hear that fiddle style in her.”

Despite their traditional leanings, Arcuri considers bluegrass and folk music to be contemporary genres. When asked if Byrne turns heads as a female fiddler in a male-dominated genre, Arcuri said, “No. We’re playing modern music in a modern era. It’s so great to have a female in the band. The audience can relate no matter what.”

Most of Driftwood’s repertoire is original, but band members do like shaking it up a bit with covers of Bob Dylan’s “Tombstone Blues,” Eric Anderson’s “Dusty Boxcar Wall,” and the Spencer Davis Group’s “Give Me Some Lovin,” which features Byrne.

Forsyth and Kollar have composed most of the band’s material for previous albums, but Byrne will be a larger contributor to the writing of the new album, due out in November.

Driftwood is looking forward to their second year at NEPA Bluegrass. Arcuri said that he and his fellow musicians were impressed last year by the beauty of Lazy Brook Park – by its flat festival grounds, refreshing Tunkhannock Creek and rolling hills on the horizon. The grounds foster a relaxing vibe among by festival fans, he remarked.

“The people are very warm and very appreciative of the music. We really felt welcome. We felt that we were making them happy,” he stated. In addition to providing a venue for the group to attract new fans, Arcuri noted, Tunkhannock is not so far away from Driftwood’s original fan base in New York’s southern tier. Arcuri hopes that even more fans will follow the band to Lazy Brook Park this year.

He also gave high marks to NEPA Bluegrass coordinators Danny and Christa Stewart and the technicians. “Danny is a great guy. Everything ran smoothly.”

“The sound engineers were great. We enjoyed working with them,” Arcuri added. “It’s a really big deal when that goes so well.”

Interested readers can learn more about Driftwood on Facebook or at www.DriftwoodTheBand.com. For more information about the NEPA Bluegrass Festival and to order tickets, log on to www.NEPABluegrass.com.

2016-05-16
Previous Post: Renovations and Restoration Continue at County Courthouse
Next Post: DCNR Secretary Kicks off ‘River of the Year’ in Sayre