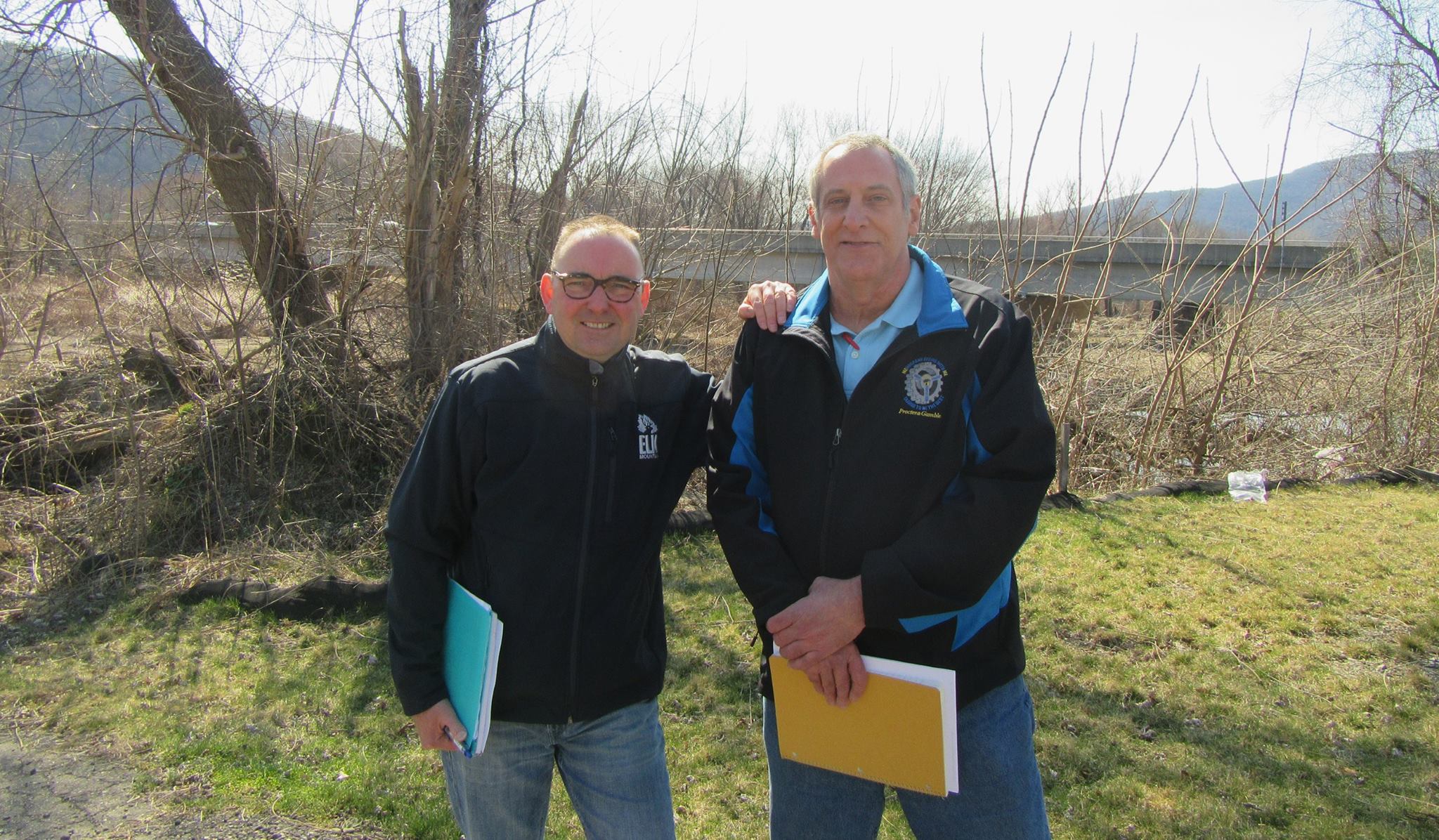 Historic Tunkhannock Walking Tour volunteer guides include Rich Jones (top, left) and Greg Spencer, who took a detour from the regular route after a March 22 meeting to view the reported birthplace of Tunkhannock where Tunkhannock Creek meets the Susquehanna River. The Walking Tour committee welcomes additional volunteers for training and practice runs that will begin in April.

The Historic Tunkhannock Walking Tour project is “right on schedule,” according to project coordinator Rick Hiduk. He and graphic designer Dianne Turrell presented a final version of the 24-page, full-color tour booklet (above) to project partners and other supporters on March 22. The booklet will be made available to the public on June 25, when Tunkhannock celebrates Founders Day.

In addition to a centerfold map of the tour route, the new booklet will include thumbnail photos of each of 40 structures featured on the tour, basic historic details of each entry, reproductions of newspaper ads back to the 1800s and other fun facts. It was approved by committee upon some final corrections. Wyoming County Historical Society (WCHS) volunteer Sarah Carr and newspaper editor Bob Baker were cited for their assistance with the research.

“All of those involved are making it possible for us to step back in time and behold Historic Tunkhannock,” said Erica Rogler, executive director of the Wyoming County Cultural Center. “The community’s positive response to the Historic Tunkhannock Walking Tour is more than we could ever have hoped for.”

“The Historic Tunkhannock Walking Tour is an additional layer of the unique opportunities to area visitors and residents,” Tunkhannock Business & Professional Association (TBPA) board member Nancy Parlo added. “The deliberate efforts of the committee reflect the community pride that makes Tunkhannock an intriguing place to discover.”

Tour guides Rich Jones, Kathi Keefe, and Beth Romanski had walked the tour route several times since the February meeting and reported that they have met several of the home owners who were eager to share their stories about their houses. Response to letters to the building owners has also been positive, Hiduk, noted.

The current owners of the Piatt House on W. Tioga Street, for example, offered volumes of history for the tour guides to use and access to old photos of the house for a Walking Tour exhibit at the Dietrich Theater planned for June and July. Jones, a professional tour guide, spent some time at the WCHS to gather tidbits of history about numerous featured buildings to share with the other guides.

“It’s so great to have so much input from so many community members for our exhibit at the Dietrich Theater – the starting place of the tour,” Cultural Center cultural programs director Margie Young stated. “All Tunkhannock residents will have the chance to learn about the town’s history and have good reason to be proud of Tunkhannock’s authenticity.”

Committee and coordinators are now focusing on the exhibit and the many aspects of the tour itself. A sample script and set of bullet points that take each building’s history way beyond the tour booklet are under development. Numerous Scout leaders answered a post on Facebook indicating that their girls and boys are excited about the opportunity to participate in practice tours beginning in mid April.

With youths in mind, the safety of tourgoers was discussed at length. Hiduk noted that Tunkhannock Borough officials had requested a copy of the tour route map so that cross walks can be repainted in advance of the tour. It was suggested that tour guides and a designated adult in each group carry stop signs like school crossing guards and that tour guides might also wear a florescent orange vest. Tour guides will emphasize safety in their briefing with each group before heading out. Group size will be limited to 15, with 10 to 12 considered optimum.

As an incentive to stay in town for a while to enjoy a meal or do some shopping, the Tunkhannock Business & Professional Association (TBPA) and Endless Mountains Visitors Bureau (EMVB) are collaborating to produce a coupon insert for tour booklets. The coupons, which will offer special deals at eateries and shops in the downtown area, will be redeemable through the summer months.

“The Walking Tour is the perfect way to learn and appreciate the wonderful history of our town, while at the same time experiencing it in the present day context,” said Mark Mitchell, board president of the WCHS. Historical Society associates feel that the tour has the potential to spark a renewed interest in history and genealogy in Wyoming County and remind residents of the treasures that the WCHS holds.

The public kickoff for the Historic Tunkhannock Walking Tour is Founders Day, Saturday, June 25. A panel of local historians will present discussions on several topics related to Tunkhannock’s History in the Dietrich Theater at 11 am. The first public tours will begin immediately thereafter. Reservations are now being taken for limited seating at the presentation and to fill tours at 570-996-1500.

The revitalization of the Historic Tunkhannock Walking Tour was made possible by grant awards provided by the Wyoming County Room Tax Fund and the EMVB as well as the PA Route 6 Alliance funded by the Department of Conservation and Natural Resources, Bureau of Recreation and Conservation with funding from the Environmental Stewardship Fund and Heritage Areas Program Fund. Look for Historic Tunkhannock Walking Tour on Facebook for regular updates.