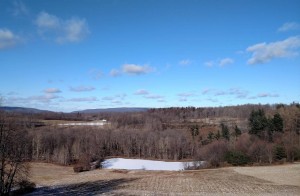 Photos by Karen Black
Last week’s snows have all but evaporated from the mountain tops in Cherry and Colley Townships in Sullivan County (top) and Albany Township in southeastern Bradford County (above) as seen from Dushore on Tuesday afternoon, but the highest peaks could take on some more measurable snow this weekend. The biting winds of the past few days will abate on Wednesday, and the temperatures will moderate a bit but remain below freezing throughout the region. Currently, a storm system coming up from the south Friday into Sunday is expected to hug the coast off Virginia and dump on the nation’s capitol and West Virginia, likely meaning more snow for the central Poconos than the Endless Mountains. The dynamics of these storms can shift suddenly, as with tropical storms in the summer, so anything is yet possible.

The EndlessMtnLifestyles.com weather report is based on expected conditions at approximately 1,100 ft elevation in Meshoppen Township, Wyoming County, near the center of the Endless Mountains region. Residents of river towns can generally expect slightly higher temperatures, while those at higher elevations may experience lower temperatures. Send us your Weather Window photos. Try to include a good horizontal/panoramic shot.