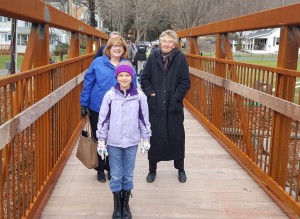 Members of the Six Nation Iroquois Confederacy (top, from left) Patrick Quinn, Vicki Shenandoah, Gere Reisinger, and Hickory Edwards came to Wyoming County from New York state and other areas to help celebrate the recent opening and dedication of the Eatonville Pedestrian Bridge. They expressed their gratitude to Township officials and other Seneca Trail project partners and shared their customs and prayers with nearly 100 people in attendance, including (above, from left) Endless Mountains Visitors Bureau director Jean Ruhf and daughter Lexi and Wyoming County Commissioner Judy Mead.

As residents of Eatonville and nearby communities in Wyoming County celebrated the reunification of their villages upon the opening and dedication on Nov. 14 of the Eatonville Pedestrian Bridge, the impetus behind the construction of the new span across Bowman’s Creek attracted a number of Native Americans from Pennsylvania and New York states to mark another milestone of the Seneca Trail project.

Their participation in an evolving endeavor spearheaded by the Eaton Township supervisors and like-minded supporting partners highlighted the importance of multicultural, family-friendly events in an area that was “cleansed” of Native Americans more than two centuries ago as part of Gen. Sullivan’s March.

Those of Native American descent who have spent their lives in this region are generally reticent to acknowledge their roots, but increasing visits by members of the Iroquois Nation, whose descendants routinely walked across and canoed through the Endless Mountains for hunting and trade prior to the 1800s have revived interest and pride in the region’s Native American heritage.

I’ve been following and reporting on the increased visitation to the area by Native Americans for about five years now. Much of this activity was initiated or at least facilitated by the Endless Mountains Heritage Region (EMHR), but connections between the Six Nation members and the region have grown beyond EMHR. Members of the Houdenosaunee (The Six Nations) are sharing amongst themselves the value of this area to their culture as a whole and have related to their comrades the beauty that the Endless Mountains hold.

Of the Houdenosaunee, the Senecas, the Oneidas, and the Onondagas were represented in Eatonville on Nov. 14. Although the Tuscaroras – the tribe that changed the original Five Nations into Six Nations – were not present, my meeting with them at French Azilum in Bradford County in 2011 was my first encounter with members of any of the Six Nations.

They drew the attention of many locals when they employed Endless Mountains Outfitters of Sugar Run to guide them on an upriver paddle to parallel the historic journey of their ancestors when they moved through the area to New York state 300 years ago. Their EMO guide, whose healthy biceps were pushed to the limit, admitted that the more stealthily-built Tuscaroras took to the task with vigor and he was merely trying to keep up with them.

“We’re pretty much used to this,” one female participant told me when I asked her if there had been any special training prior to the sojourn. “We’ve done this since we were kids.”

So has Hickory Edwards of the Onondagas, who leads the Onondaga Canoe and Kayaking Club along Lake Onondaga in New York. In 2013, they decided that it was time to relearn the stretch of streams and rivers that were used by their ancestors for centuries to go meet with the “Great White Chiefs” in Philadelphia and eventually Washington, DC.

They chose to embark on their sojourn on the 400th anniversary of the Two-Row Wampum Treaty, a pact forged with between the Houdenosaunee and Dutch settlers that is still honored (in theory at least) by the US government. It began to occur to me that the desires of this generation of Native Americans to research their roots was going to bring me a much better understanding of how our heritage and theirs shares so many branches.

Hickory immediately became a big fan of the Susquehanna River, maintaining that no waterway in New York State could rival it in terms of cleanliness and beauty. “Every turn of the river is a postcard image,” Hickory told me after he had and his kayaking partner had paddled from New York state to Eaton Township in Wyoming County where they and their support crew camped on the property of township supervisor Paul Rowker.

Hickory returned to Eatonville on Nov. 14 with a small white pine – a symbolic start from the Tree of Peace that was dedicated at Onondaga by the Great Unifier of the native peoples of the North more than five centuries ago. Hickory was assisted by Gere Reisinger, a sacred site manager for the Seneca Nation who lives in Kingston. Gere noted that he and Hickory had paddled a section of the river together in 2014.

By re-learning the waterways and making their presence know here, Hickory related, his generation hopes to foster a renewed peace and understanding among the people now residing here. Involvement of Native Americans at events such as those associated with the Seneca Trail are all the more poignant when both cultures are represented. Native Americans have a humbling way of describing their relationship with the Earth and their beliefs about the forces of nature.

As he watered the small tree from a jar that he had brought with him from Onondaga, Hickory explained, “The generations ahead of us are looking up from the ground,” meaning that tomorrow’s children are already counting on us to be responsible stewards of the land and to learn again how to live in harmony with it for their benefit.

I was very proud of the people of the Eatonville United Methodist Church, who allowed their Native American guests to exhibit sacred artifacts and other cultural memorabilia in the vestibule next to the sanctuary. Some churches, who don’t share the UMC’s doctrine of inclusion, would have considered such use of church space as sacrilegious if not pure heresy. The Rev. Betty Reilly also graciously shared the act of blessing the pedestrian bridge with Oneida Nation representative Vicki Shenandoah, who read the Houdenosaunee Prayer of Thanksgiving.

“Today, we have gathered, and we see that the cycles of life continue,” starts one of the verses of the prayer, which Vicki read in both Houdenosaunee and English, “We have been given the duty and responsibility to live in balance and harmony with each other and all living things. So now, we bring our minds together as one as we give our greetings and our thanks to one another as people. Now our minds are one.”

For at least a couple of hours on that chilly Saturday morning in Eaton Township, this was very true as local residents were symbolically linked to the Iroquois Nation. Gere told township supervisor Randy Ehrenzeller before he left that the bridge dedication was the eighth sacred site event that he had coordinated locally for the Houdenosaunee. “This was definitely the best one,” Gere remarked. “You guys did a great job here.” 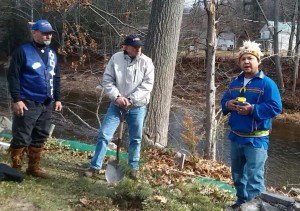 Onondaga representative Hickory Edwards (above, right) explains the Native American concept of the River of Life from which he watered a small white pine – a Tree of Peace – that was planted near the bridge by visiting members of the Houdenosaunee as a gift to local residents for preserving the Seneca Trail through Eaton Township. 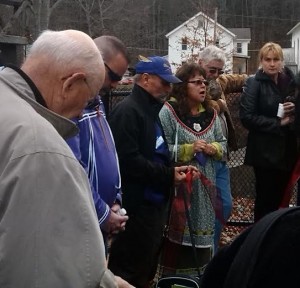 Vicki Shenandoah (above, center) of the Oneida Nation recites the Houdensaunee Prayer of Thanksgiving at the dedication of the Eatonville Pedestrian Bridge.