By: Rick Hiduk
In: Buy Fresh Buy Local
With: 0 Comments 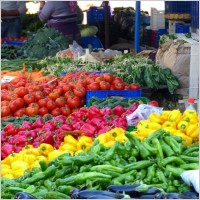 The 2015 growing season is in full swing, and local agricultural producers are bringing a bounty of fresh vegetables, fruits and handmade crafts to a farmers market near you. Members of Northern Tier Buy Fresh Buy Local (NTBFBL) are anxious to get the word out about the many locations where their products are available, as well as direct marketing options.

One of the goals of EMHR and NTBFBL is to make it easier for consumers to find, choose and appreciate local foods which, in turn, supports farmers and farmland retention. “Our heritage is rooted in agriculture,” said EMHR Executive Director Annette Schultz. “Supporting and promoting our farms through the BFBL program and Taste of the Endless Mountains events reflects our heritage mission.”

Nicole Harris, Environmental Specialist at Mt. Pisgah State Park, agrees. The BFBL program became a logical extension of her work as an educator at the park a little more than a year ago, and she welcomed EMHR’s involvement in the program as a new avenue for promotion and partnerships.

“I feel strongly about connecting consumers to their food. They forget that we have such great access to local produce around here,” Harris stated. “We give them a direct link to their farmers so that they know where their food comes from.”

Most local markets are open just one or two days per week, and hours vary greatly. Interested readers are encouraged to pick up or download a copy of the Farmers Markets brochure at www.endlessmountainsheritage.org for specific details.

Both the brochures and the Local Food Guide are available at many historical sites, museums and libraries in the Endless Mountains region; state parks and agency offices in Bradford, Potter, Sullivan,Susquehanna, Tioga and Wyoming counties and at most Chambers of Commerce in the area.

A Taste of the Endless Mountains will return to the Troy Sale Barn on Saturday, October 17, running from 10 am to 2 pm.

“The event was organized to bring local farmer’s, producers, crafters, caterers, and restaurants together and give consumers a chance to taste their foods, try their products, and see demonstrations on how their goods were made,” EMHR’s Buy Fresh Buy Local coordinator Hillary Robinson explained. “We are hoping to better this event each year and expand it to surrounding counties.”

Harrison was overwhelmed last October by the vendor participation and number of patrons at the inaugural A Taste of the Endless Mountains. She saw the event as the perfect catalyst for introducing the public to sustainable agriculture, which starts with knowing and supporting local producers.

There’s no logic in buying ‘organic’ spinach that is grown in California when one considers the diesel fuel that it took to get it here, Harrison suggested. “It’s so important that we think to compare the national and local footprints.”

Taking advantage of our access to quality local produce has long term cultural and economic benefits as well.

“Farming is part of our past, but should also be central to our future,” Schultz added. “It is at the core of our identity.”

The Local Food Guide and Farmers Markets brochures are also available at the Endless Mountains Visitors Center near Tunkhannock and the Endless Mountains Heritage Center in Towanda. Anybody who would like bulk copies for distribution may contact EMHR Director Annette Schultz at 570-265-1528.