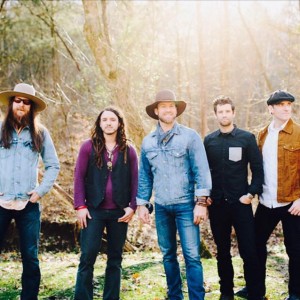 Commentary and Compilation by Rick Hiduk
The HillBenders bluegrass take on the Who’s “Tommy” is more than just a novelty endeavor. The talented musicians (top) from Springfield, MO, have what it takes to bring a whole new generation to the traditional country and folk camp with their delightfully familiar bluegrass romp. Meanwhile, Drake White (above) and his band break the 80-beat-per-minute country rock mold with the refreshingly dance-able “It Feels Good.” It could easily become the country hit of the summer.

I always enjoy researching modern music of the America genre, which includes popular country, bluegrass, blues, and folk music. I generally try to catch up with the genre at least twice if not three times a year. In January, I forgot to include the Blues, so the chart was not truly Americana.

This time, the Blues are back in, and Bluegrass is better represented since I stumbled onto a weekly Bluegrass airplay chart. Check out this puppy: http://bluegrasstoday.com/chart/. All 20 songs are worth a listen, and it was great to come across The Roys, who I’ve seen at NEPA Bluegrass in Tunkhannock. But it was the group Detour’s “Train, Train” – https://www.youtube.com/watch?v=w_X1KY6T5do – that actually made me get up from the computer and dance.

I was pleased to find Boz Scaggs, the Kentucky Headhunters, and Steve Earl still kickin’ it on the Blues charts. I know that The Blues are a legitimate slice of Americana, but I’ll admit to not be as discerning as I am with the other sub genres. In other words, most blues songs sound alike to me. I welcome any true fan of The Blues, knowledgeable in current releases, to help me out with the next Americana chart.

I used to be able to tap pretty deeply into Billboard’s Folk charts for primarily acoustic rock that made me swell with country pride or at least reverberated with enough twang to make me feel like I was sitting on my front porch listening to peepers. But folk has swung pretty dramatically in the past year to folk rock and alternative. Refreshing standouts include recent releases by Courtney Barnett, Vance Joy, James Bay, and former Dire Straits guitarist Mark Knoffler.

Bluegrass is on fire and shares a generation spectrum among its artists similar to current Blues music. I couldn’t help but crowd the top ten of this chart with some gems that I really hope you’ll give a listen and/or watch on YouTube. I picked The HillBenders “Pinball Wizard” from their “Tommy – A Bluegrass Opera” as the #1 song after hearing it only once on iTunes. Then I watched a live performance video and truly felt that The HillBenders could be the perfect vehicle at present to open the ears of young country music fans looking for more substance. “Pinball Wizard” is much more than a novelty hit.

I have noticed that, because bluegrass and the blues do not get as much airplay, it can take longer for a particular song to be recognized as a hit. Several songs on the bluegrass airplay tally list were as much as a year old. But that’s often true of the third or fourth single off any pop country album that the recording industry moguls are milking.

Disparaging news about a skewing of country radio playlists toward primarily male pop country performers confirmed comments I’ve made before that hinted at conspiracy and my disappointment that country radio is no longer concerned with contributing to the Americana genre. Country radio executive Keith Hill should be run out of town for telling radio programmers to wipe females off their playlists. Nobody should have that much influence over any industry.

Apparently, Hill has decided that most country radio listeners are females, and that girls want to hear male artists. Well, he may be right. I’m a guy, and I can hardly stand listening to commercial country radio anymore because there aren’t enough women on the playlist. BroDude Pop Country all sounds alike and makes me nauseas. In the early ’90s, female artists helped save country radio from certain doom, and this is their reward. Let’s move Maddie & Tae to the front of the line and also make some room for Della Mae, Courtney Barnett, and Heather Slaughter and get the Pistol Annies to record another album.

Nonetheless, I try my best everyday to like something on country radio, and I’m thrilled that “Girl Crush” by Little Big Town was able to claw its way to the the top. I love the band, and the song is so simple and folky to those who understand and/or can relate to the expressed angst. For some reason, I’ve also found Drake White’s “It Feels Good” irresistible. It exudes country fun, and suits summer perfectly.

Finally, as I present the list, keep in mind that the rankings are somewhat vague and arbitrary. I do rate the songs as I listen to them, but then I try to present the best crossover possible of the sub genres that would comprise the lineup of a contemporary Americana radio station, if such a thing existed. Otherwise, think of these as the songs that I would play through my outdoor speakers as we were drinking beer and shooting horseshoes in the backyard together.