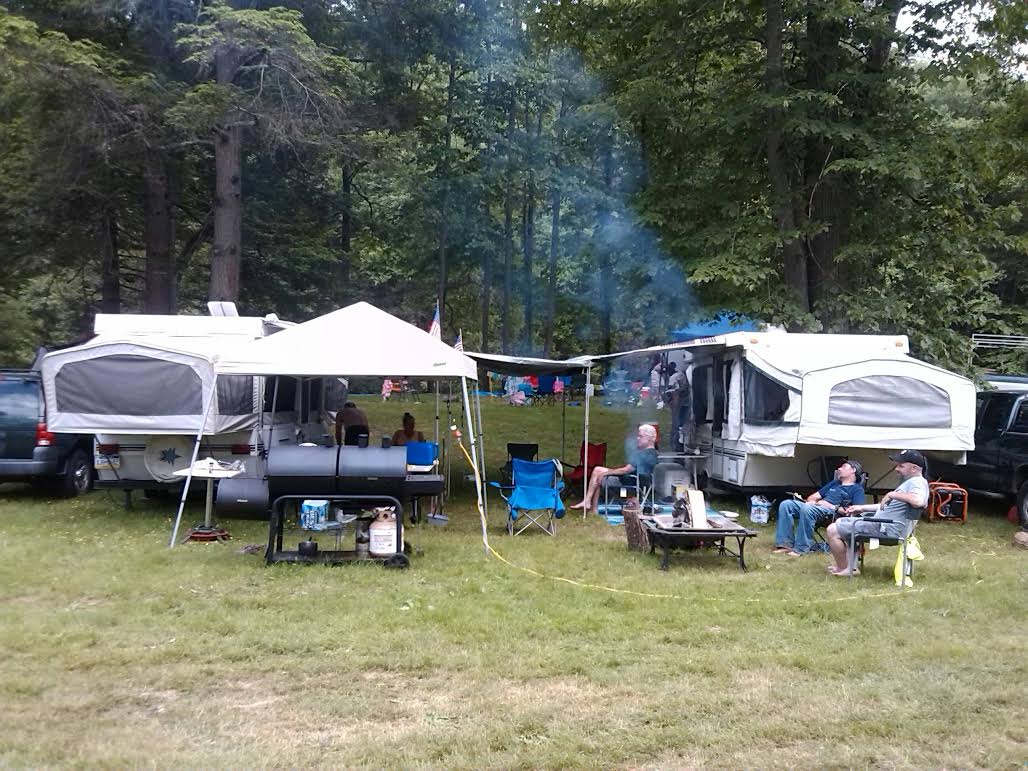 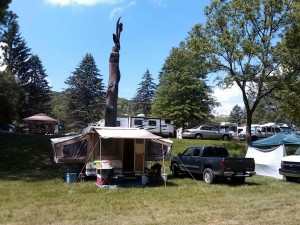 Home Sweet Pop-up. We took advantage of free camping this year at the NEPA Bluegrass Festival, held May 29 to 31, and we’re hooked. Staying on site for a few days is a stress-free way to enjoy all that the festival has to offer.

It’s hard to believe that it’s been just over a week since we camped at Lazy Brook Park for three days at the 2015 NEPA Bluegrass festival. It seems like forever ago already, largely due to the fact that, like most people these days, we had to bust our humps to get away for even two days, and then it feels like we’re behind the eight ball the whole next week trying to catch up on chores and work.

But it would be unkind to let too much more time get by without thanking Danny and Christa Stewart and their army of helpers for pulling off yet another fantastic weekend event that brings together so perfectly the elements of homegrown music, nature, and camaraderie.

This was the first year that we took advantage of the free camping offered with a weekend pass, and we have every intention of doing so again next year, inviting friends to join us and better planning our “camperhood.” There is simply nothing more relaxing than kicking back in the warm summer breeze to the smell of grilled food, laughter of children and fellow campers, and strains of bluegrass music filling the air.

We lucked out by popping up our camper on Thursday night across from two other pop-ups facing each other in which five folks from Pringle and Kingston spent the weekend. Despite a fairly busy walkway that ran between us, we were able to pull together potluck meals and shared some good laughs from morning to night with our neighbors.

Christa estimates that more than 1,000 festival goers opted to camp this year, and that attendance among daytrippers – those opting to come to the park for a single day or evening’s performances – was up from last year. At it’s peak on Saturday, it surely seemed that more than 2,000 people were roaming the grounds, temporarily rivaling nearby Tunkhannock in population density.

Sunday’s attendance was down a bit due to calls for additional showers, but “We did not miss any shows due to rain,” Christa noted. In fact, the weather was nearly perfect from Thursday, when vendors and the early-bird campers arrive, through Saturday evening. “The sun came out just in time for the Sunday gospel sing and jam with Mike and Mary Robinson,” she reported.

We opted to camp in the “gully,” which literally served decades ago as a flood canal during the high water events that eventually consumed the old neighborhood of family homes that once filled the park. It’s important to note that the lowest areas of this depression can hold water for a while after heavy rains, which did happen this year on Sunday morning.

Between us and the main stage area was a virtual village of RVs that was dubbed Beverly Hills. Along the bank above Tunkhannock Creek were clusters and rows of tents. Regardless of where one chose to camp or how many modern conveniences one enjoyed, the spirit among those who chose to stay in the park was equally boisterous. We were all there to have a good time, whether that meant watching a show at either of the two stages, sitting in on a jam session under a pavilion or next to someone’s camper, or wading or floating in the refreshing waters of the creek.

“Overall, it was amazing and smooth running,” said Christa. “There was beautiful karma on the and great juju on the grounds – all we could ever hope for.”

To be honest, we didn’t take in as many shows as we have in previous years. After such a long, hard winter and a short spring that seemed to be more about getting caught up and ready for summer than anything else, we both felt the need to unwind and simply sit a spell. We did take in the late shows both Friday and Saturday nights at the Progressive Stage and thoroughly enjoyed performances by the Hillbilly Gypsies, Coal Town Rounders, and Driftwood. There was also a small pickin’ parlor next door to us where the strains of bluegrass music continued for another hour or two each night.

As much as my knowledge about and collective repertoire of bluegrass music continues to expand, so too does my understanding that the genre perhaps enjoys the greatest cross-generational appeal of any music still being produced. It is so inspiring to see children, teens and 20-somethings dancing to a form of American music that has changed very little in the past 70 or more years.

For our part, we ate great food, bought CDs to add to our own bluegrass collection at home, took a swim, made new friends and are already looking forward to next year. As the Stewarts assess the response from guests and vendors at this year’s festival, the sentiment appears to be universal.

“We are reading over each and every survey and have not found a negative comment yet,” Christa shared with me via Facebook. “It was our best year yet!”

Christa suggested that, next year, we bring the camper in even earlier and has offered to let me put on my Game Show Nite in a pavilion on Thursday for the vendors and other early arrivals. After letting me represent the festival on WBRE for them this year – an incredible honor – I’d be foolish not to take her up on her offer.

In the meantime, I recommend that you readers follow NEPA Bluegrass on Facebook and at www.nepabluegrass.com. Take advantage of the early bird ticket special in January and plan to join us next year. You will not regret it.

I cannot express enough how privileged we are to have a world-class festival of this nature in our backyard. In addition to the extreme level of talented performers who comprise the lineup each year, the Stewarts are so personable that they put the icing on the cake for everyone who attends. If Danny is the mayor of Lazy Brook Park for three days, Christa is surely both first-lady and ambassador.

See photos from other NEPA Bluegrass guests at: https://www.facebook.com/pages/Nepa-Bluegrass-Festival/220380294646738?pnref=lhc