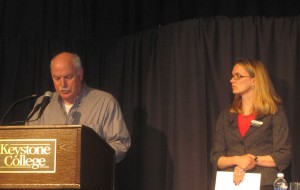 Candidates for Wyoming County Commissioner, including (top, from left) Maureen Dispenza, Tom Henry, Judy Kraft Mead, Ron Williams, and Randy White participated in a debate at Keystone College on Monday evening that was sponsored by the Wyoming County Chamber of Commerce and the Wyoming County Press Examiner, represented respectively by (above, from right) Gina Severcool Suydam and Bob Baker.

“I’m more confused than ever,” said a female audience member after moderator Fran Calpin, senior director of college relations at Keystone College, and Chamber director Gina Suydam concluded the debate. Others who were hopeful that the exchange would shed light on differences between contenders and incumbents were disappointed in the reluctance of the candidates to separate themselves from each other.

Each participant was alloted a two-minute opening statement, which was followed by 10 questions posed by Calpin to the participants, who were allowed one minute each to answer. Prior to the questioning, Examiner editor Bob Baker read a piece that had been provided to him that defined the duties for which a county commissioner is and is not responsible. Many tasks for which residents expect action on the part of commissioners are in fact either state or township issues.

Republican contender Maureen Dispenza addressed the audience first, citing her eight years of experience as director of the Chamber of Commerce as an essential tool in preparing her for county leadership, especially among business leaders. “By listening to all of their comments, I learned more than I ever thought possible,” she stated. “Peoples’ expectations are high. And, as tax payers, they should be.”

Incumbent Tom Henry followed, citing his pride in the current board’s capping of tax increases, the elimination of the per capita tax, the control of salaries and pensions relative to other counties, and the investment of $400,000 in natural gas impact fees for a CAD (computer-aided dispatch) system for emergency services. “I want people to know that I am an active commissioner,” Henry stated. “I have never worked under 35 hours a week.”

Judy Kraft Mead is seeking her fourth term as commissioner, which she suggested later in the event will be her last. She credited the tax cap to “courthouse and other county employees for coming up with innovative ways to run the county more efficiently.” Her strongest asset, she asserted, is her loyalty to the county. “I’m not only proud of Wyoming County,” she stated. “I’m prejudice toward it.”

Incumbent Ron Williams, the sole Democrat in the field, has served the county as commissioner for the most years, taking a break only when then Gov. Ed Rendell appointed him Northeast Regional Commissioner for Agriculture. Since his re-election to the board, Williams related, he has had opportunities to work with state and regional agencies associated with adoption and fostering of children. A parent of several adopted children, Williams also served as a police officer in Falls, Clarks Green, and Tunkhannock. “I’ve always kept the needs of the citizens first and foremost,” he remarked.

Contender Randy White, currently vice-chairman of the Tunkhannock Township Supervisors and a 15-year supervisor, cited his service to the community as assistant chief of the Triton Hose Company, Police Commissioner, and an athletic coach as essential experiences in his quest for a seat as commissioner. “I lead by example and make decisions based on the best outcome for everybody,” he said later in the program.

In response to most of the questions that followed, the candidates chose the middle road and primarily agreed with each other on the credibility of issues and as to what could be done to enact change or improvement. Current board members cited their collaborative efforts during the last term, and the two contenders, by and large, said that the commissioners were doing a good job dealing with gas related issues, balancing the county budget, and addressing the needs of the elderly and residents dealing with mental illness.

All claimed to be vigilant on public safety and environmental issues, welcoming to new businesses and against a county-wide reassessment of property values, and each promised to be accessible to the public at all times. The candidates were solidly in agreement that Wyoming County has a serious drug problem that leads to additional crimes. White went a step farther by suggesting that law enforcement needs to be “beefed up” to deal with the problem. He and Williams called for more education at the school level as a means of intervention.

White and Mead concurred that citizens need to band together to help curb the reported growth in drug-related crimes. Mead encouraged citizens to report suspicious activity to the police. “Sometimes, you know something just isn’t right,” she remarked.

While all participants agreed that costs associated with the Wyoming County Jail and the court system were perhaps the greatest fiscal crises facing the county and that Gov. Tom Wolf’s proposal to enact a severance tax on natural gas companies was of considerable concern, Dispenza broke from the pack on both issues.

While conceding that as many as 80 percent of current inmates were convicted for drug-related crimes, Dispenza said that too many prisoners are incarcerated for low-level violations, including non-payment of child support.

“There are offenses that we should not be housing prisoners for,” she maintained. “While they’re sitting in jail, they are not making money to pay child support.” Recreational drug users, she continued, are “drying out” during their jail term, but their root problems are not being adequately addressed. She suggested a stronger probationary program and more drug treatment as viable alternatives.

As for the severance tax, which Williams and White said they would support so long as there are guarantees that the current impact fee distribution continues unabated, Dispenza questioned the justness of taxing natural gas extraction and not all commodities, including lumber and stone. “Taxes need to be fair,” she stated.

Henry and Mead also oppose a severance tax, mostly because they are concerned that drillers will go elsewhere, and the Republican commissioners do not trust the Wolf administration to keep the impact fee, which is vital to the county and its municipalities, intact. Pennsylvania already has some of the highest corporate and income taxes in the country, Mead added, and the proposed severance tax cannot make up for Wolf’s proposed elimination of school property taxes.

The one-and-a-half hour debate that lacked exciting new ideas and the pointed criticism that some in the audience anticipated was also short on levity until the final question was posed to the panel. Calpin asked the candidates whom among them they would most like to be seated with at the commissioners table after the election.

White and Dispenza kindly committed to collaborating with whomever else the voters chose to represent them, Dispenza adding that the electorate was lucky to have more choices this year. Not surprisingly, Henry and Mead expressed hope that there would be no change in the board so that they could continue longterm projects that are currently underway.

Technically unopposed and all but assured of retaining his seat, Williams drew some laughs from the audience with a characteristically honest response. “As the minority commissioner, I can work with anybody,” Williams related. “I do argue a lot. I feel that’s my job as minority commissioner, and I promise to keep arguing on behalf of the citizens of this county.” 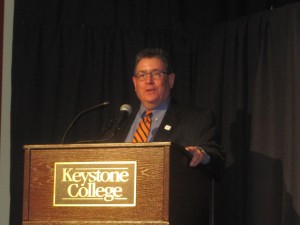 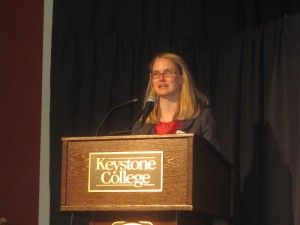 Gina Severcool Suydam, executive director of the Wyoming County Chamber of Commerce, introduced the candidates and timed their responses.