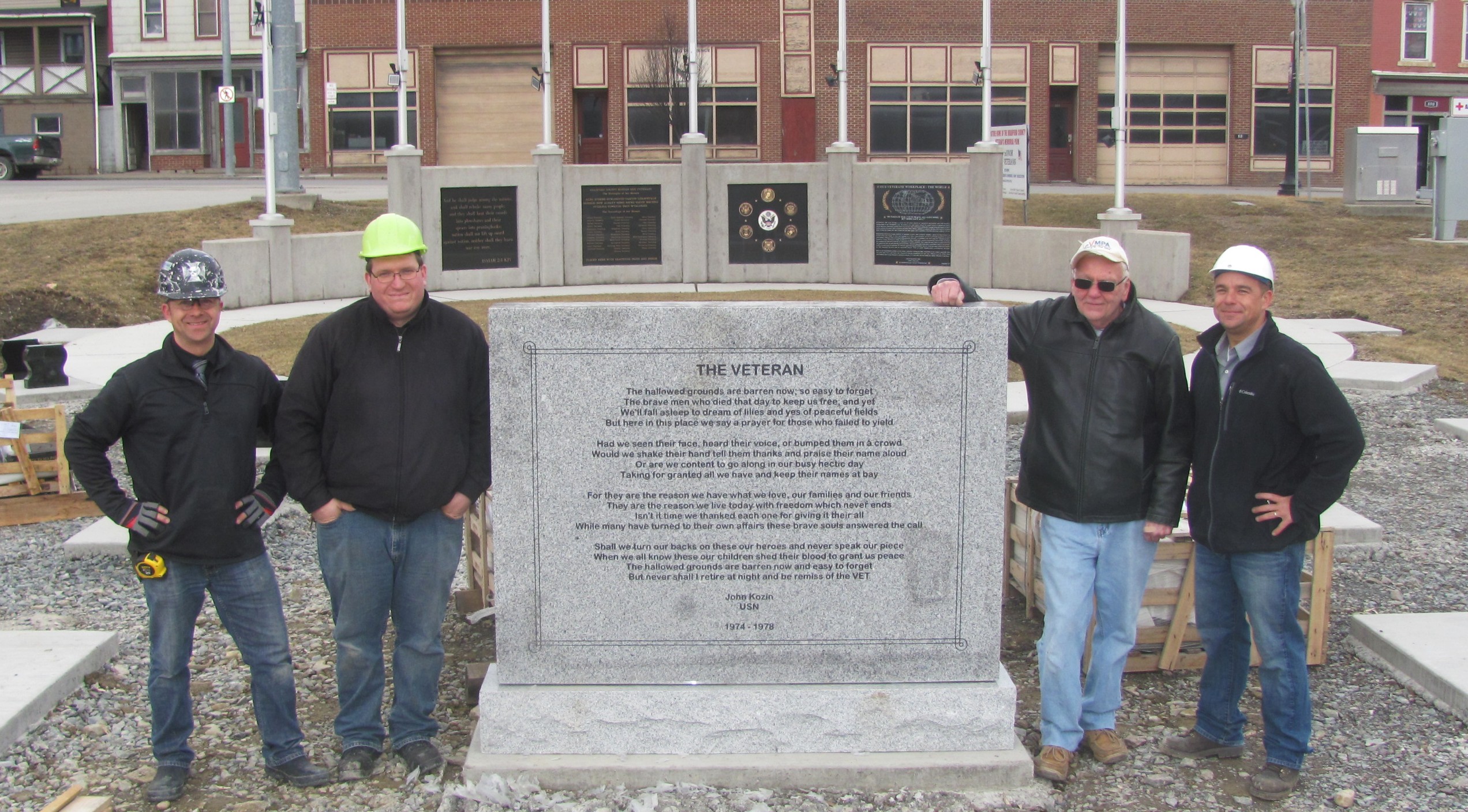 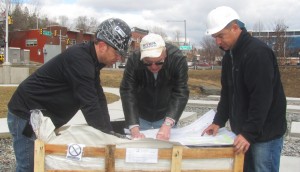 Neil Lewis (top, from left) and Matt Forrest of of Belles Monument Company, Bradford County Veterans Memorial Park Association (BCVMPA) associate Joe Doherty, and Keith Lewis of Belles flank the Veterans poem monument that was installed at the park in Towanda on March 27. Doherty (above, center) shows Neil Lewis (left) and Keith Lewis where the granite benches are to be erected.

Motorists traversing the intersection of the Veterans Memorial Bridge and Main Street in Towanda will no doubt notice big changes at Veterans Memorial Park over the next few months. Workers and managers from Middendorf Construction Company, M.R. Dirt, and Belles Monument Company met at the site on Friday morning and erected the first in a series of monuments and statues that will adorn the park, as well as 14 of 18 granite benches planned for the site.

The elements are part of Phase III of a four-part project and had been in storage at Global Tungsten Products since their delivery last month. Engraved granite pavers purchased last year by supporters and delivered in late autumn 2014 will be installed in mid April (or whenever the ground stops heaving) to complete the walkway from the entryway to the circular sidewalk at the base of the wall holding the plaques and flagpoles.

“They came during the cold weather, so we couldn’t do anything with them then,” Doherty said of the monument and bench parts. He was joined at the work site by BCVMPA operations manager Roy Schrimp and Middendorf manager Willy Rowe on a morning that didn’t feel much like spring, except for an occasional break in the cloud cover.

The poem on the new monument was written by U.S. Navy Veteran John Kozin from Philadelphia whom Doherty had met in New Hope some years ago. According to Doherty, he came across the poem while searching online for epitaphs that would be suitable for the park and recognized his friend’s name as the author. Kozin has been to the site before and will return when it is dedicated, Doherty related.

The monument is about 4 feet high, five feet wide, and eight and a half inches thick. Lifting the 2,800-pound piece into place with a crane with a large boom were brothers Vince Eberlin and John Eberlin of Middendorf construction. Guiding it to its pedestal were Matt Forest and brothers Neil and Keith Lewis of Belles Monument.

Doherty admits that there were some anxious moments on his part as the monument swung in its straps toward its final destination. Once in place, a plastic sheathing applied to protect the engraved poem had to be meticulously shaved away with razor blades by Keith Lewis and Forrest. While that was being done, Doherty and Neil Lewis began opening the crates containing the bench parts and setting them into place.

Phase IV of the project, which will include the installation of two bronze statues, a rotunda, and landscaping have yet to be funded. BCVMPA members are hopeful that, as would-be supporters see progress on the project, they will be more willing to step forward with some of the $200,000 needed to complete the park. There is also room for four additional benches, which can be sponsored at $5,000 each.

In the meantime, Doherty expressed his gratitude to the aforementioned companies, including GTP, for providing their services at no cost.

Readers interested in helping with the project can find additional information at www.bcvmpa.org. 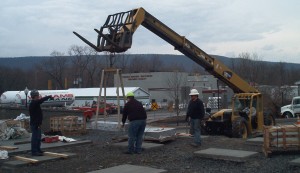 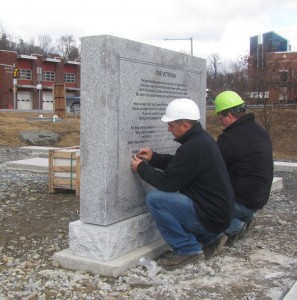 Keith Lewis (left) and Matt Forrest shared the tedious task of removing plastic sheeting that had been applied to the monument with an adhesive to protect the lettering during shipment.