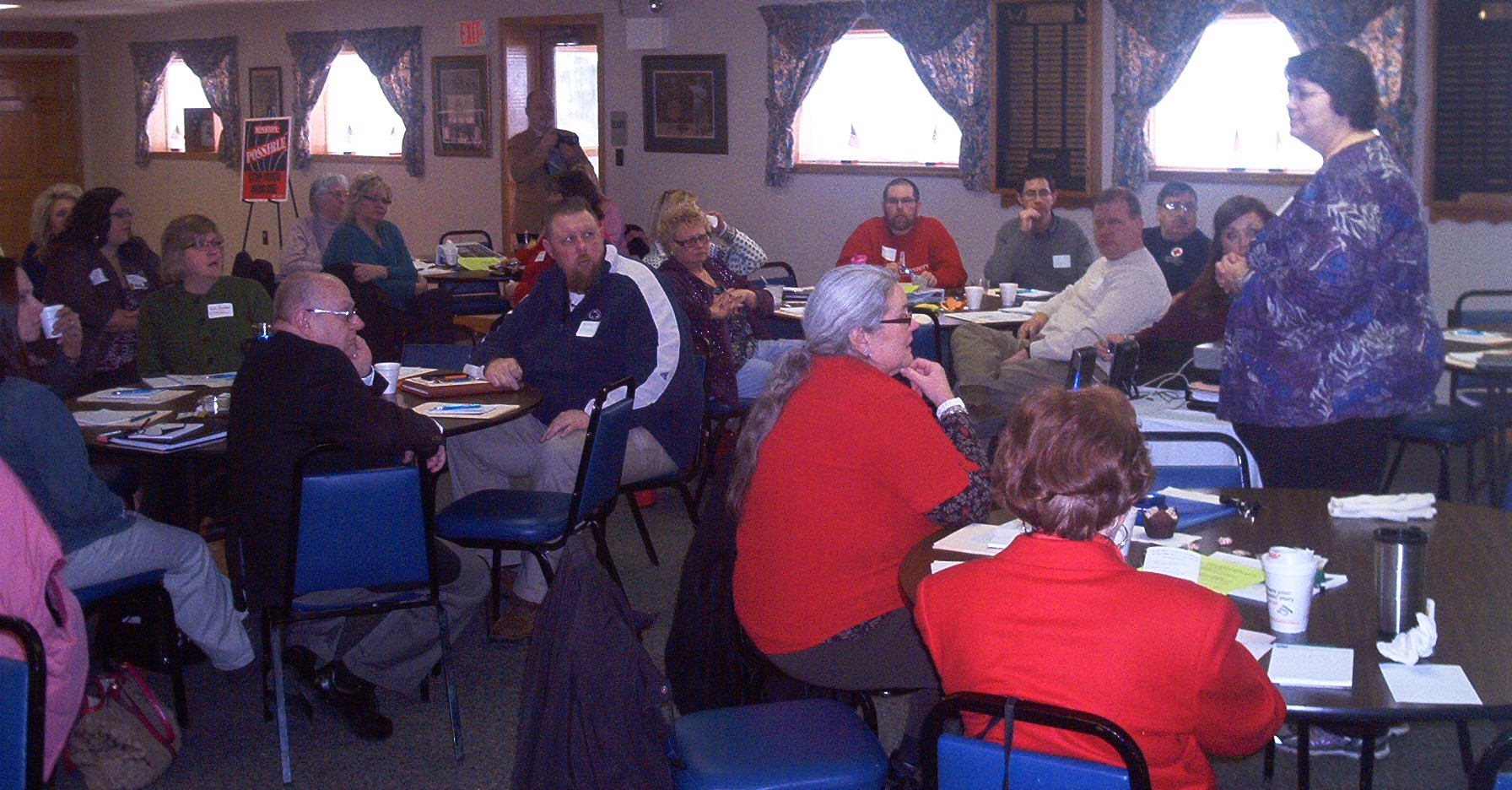 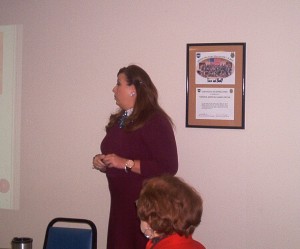 Partners in Family and community Development Director Joyce Kerrick (top, standing, right) welcomes members of the Communities That Care coalition to a breakfast meeting held on Feb. 18 at the American Legion Post in Towanda. Key speaker at the meeting was Phyllis Law (above) of State College-based EPISCenter.

Communities That Care (CTC) invited key Bradford County members to a breakfast meeting on Feb. 18 at which they were reminded that “an ounce of prevention beats a pound of cure” is more than a cliché, it’s a scientific fact – especially when applied to efforts to prevent drug and alcohol use among children and teens.

Phyllis Law was the primary speaker at the event, attending the meeting at the American Legion Post in Towanda with Meghan Blevins, a fellow associate from EPISCenter of State College. The agency’s acronym is based on the belief of its founders in Evidence-Based Prevention & Intervention.

“We’re not here to treat, we’re here to prevent,” Law said of Prevention Science, a methodology of working with youths as early as the sixth grade and following them through their teen years, as exposure to drugs and alcohol increases in tandem with peer pressure.

Communities That Care is a coalition of agencies and individuals associated with Partners in Family and Community Development (PFCD), which has offices on Bridge Street in Towanda. The primary goals of the meeting, according to PFCD Director Joyce Kerrick, were to get information out to the community as to what the CTC coalition does, to generate support in the community, and to provide community members with leadership opportunities.

“A lot of coalition work is getting information to the public that is unbiased and true,” Kerrick remarked. “It isn’t just someone’s opinion.”

Part of the evidence that EPISCenter uses to help implement programs for schools and other organizations is gleaned from polls of students conducted in five Bradford County School districts. The PAYS (PA Youth Survey) assesses risk and protective factors as perceived by sixth, eighth, 10th, and 12th graders.

Good news gleaned from surveys of sixth-graders, for example, indicate that the perceived risk of drug abuse has increased by more than 10 percent from 2009 to 2013, while the perceived availability of drugs dropped from 62 to 44 percent. High school seniors also reported a decrease in the availability of drugs in the same time period, but their perception of the actual risk of drug abuse changed little, hovering around 52 percent.

“The two things that we are are planning to focus on in our next action plan are underage drinking and marijuana use,” Kerrick related. Upwards of 40 percent of seniors polled in 2013 reported having used alcohol in the last 30 days. “That means that 60 percent of them haven’t,” Kerrick added, “but we’d like to see much lower numbers for those who use alcohol.”

Marijuana use among youths in Bradford County has increased in recent years. “The push to legalize it makes children and teens think that it’s not dangerous and won’t hurt them,” said Kerrick. “We need to get the word out to them that that isn’t true.”

Through a series of questions that are routinely updated to reflect a changing world, local students help researchers understand the relative impact of risk and preventative factors in their communities, families, schools, and among their peers and other individuals. Polls conducted in 2009, 2011, and 2013 are part of a five-year longitudinal study of youths across Pennsylvania.

The numbers are then plotted on graphs that indicate trends as well as the comparative state averages. Across the board, Law suggested that some of the greatest obstacles that participating CTC members continue to face are laws and norms favorable to drug abuse, low neighborhood attachment, and poor family management.

Evidence-based programs offered by CTC include Botvin LifeSkills Training for sixth graders. “We help them to develop peer resistance, self confidence, and good communications skills,” Kerrick explained, “so they know how to refuse when someone asks them to use marijuana or alcohol. These are skills that they can carry over into other areas of life.

Kerrick noted that response was high among meeting attendees who were asked to leave their names and contact information if they were interested in volunteering or conducting one of CTC’s drug and alcohol use prevention programs. There will be another meeting in three months to provide updates for key community leaders.

For more information about Communities That Care and Partners in Family and Community Development, readers can log on to www.pfcd.org or call 570-265-6246.