By: Rick Hiduk
In: Public Safety
With: 0 Comments 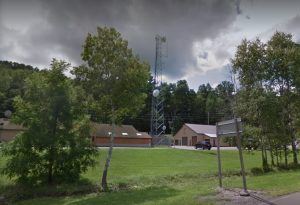 The Bradford County Public Safety Center in North Towanda (top) is nearing completion and could be fully occupied and operational by November. It is adjacent to the existing Emergency Management building (above) on Route 6.

Bradford County director of public safety Robert Barnes was on hand at the Sept. 10 meeting of the Bradford County Commissioners to read a proclamation marking the observance of National Preparedness Month. The annual public awareness campaign is cosponsored by the Federal Emergency Management Agency (FEMA) and the Department of Homeland Security.

Barnes granted an interview to Endless Mountains Media Services afterward to explain what National Preparedness Month means at the county level, as well as how the county EMA works with local first responders and police. He also provided an update on the status of the new Bradford County Public Safety Center that was scheduled to open in August and prospects for better communication once the fiber loop project is completed. 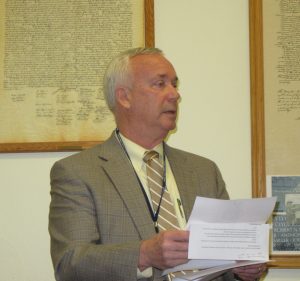 “National Preparedness Week is an opportunity for us at the county level to not only finish up and enter into some new areas that we have identified that need to be addressed, but also to remind the general population that this is hurricane season and a time of changing seasons,” Barnes related, “It’s the time of the year when we transition from being busy outside to moving back indoors where we rely on mechanical things like heating systems that might need attention.”

Tropical storms have notorious ravaged the county in the past with flash flooding, wind, and river flooding. The hazards of autumn are followed by ice and snow storms that can lead to power outages. Last year, Bradford County Emergency Management collaborated with all of the municipalities to complete the 2020 Hazard Mitigation Plan, which addresses and prioritizes potential disasters and harmful situations and offers guidance to community leaders to prepare for and react to them.

“All the municipalities have an opportunity to list efforts that have taken place to mitigate those problems, such as improving ditches and culverts to mitigate flooding,” Barnes explained. “It helps to justify their expenditures and provides an opportunity to get outside the systems for those projects. Often times, it opens doors to grants and outside resources.”

Not all hazards are related to the weather. Radon, for example, becomes trapped and can build up in homes, schools and business buildings and is the second leading cause of lung cancer in the nation. “People don’t think about that too much,” Barnes remarked.

As a follow up to the hazard mitigation plan, Bradford County Emergency Management just finished a traffic flow study to track the movement of hazardous material in the county. “In that process, we have individuals out that count and log trucks with hazardous material,” said Barnes. “It creates a data base to share with emergency response organizations on the flow of trucks through their communities and what materials are being transported. Training for those responses is all part of the mitigation and preparedness for response.”

Two industries that move significant amounts of hazardous materials across the county are railroads and those involved in natural gas production. Both, Barnes maintained, have worked closely with Emergency Management to coordinate responses to potential hazards. “We’ve had great success. They’ve been very transparent with us,” he said of the gas companies and their supporting partners. “I can’t think of an instance where we were stonewalled on information that we had asked for.” For the transportation survey, he added, “the railroad companies also provided lists of what was transferred and how many cars.”

For all of the potential dangers to which Bradford County officials had become accustomed, few were equipped to deal with the coronavirus pandemic, including the potential for a larger outbreak of the deadly lung ailment and what would be required to reopen shuttered businesses and schools.

“Our biggest efforts in 2020 have been related to COVID,” Barnes noted. “All year long, Emergency Management has served as a distribution point for guides and guidance for nursing homes, schools and local first responders.”

The county commissioners look to Barnes’ team to develop policies in regards to COVID, he added, “And we work closely with the county’s COVID task force to evaluate efforts that are being made in the medical community to offset those problems.”

The Public Safety Center is “moving along,” Barnes reported. Despite hopes of opening the facility in North Towanda Township on Aug. 13, the COVID crisis stalled the process, and county officials are now looking at the possibility of it being fully operational by mid November.

The exterior is near completion and “The inside is very busy. There are workers there every day,” said Barnes. “The technology and internal operations of the building are going to be amazing. It’s just taken some time to make sure that everything is perfect.”

The primary goals of county officials when securing funds and identifying potential uses for a new safety center are to bring Bradford County up to par with technology and technical supports for communications and emergency response support. When completed and linked through the new fiber loop system, the interface between Emergency Management, the 911 Center and first responders will allow for near real-time operations from an initial call and deployment of first responders and other resources. It will link through the microwave system and make the transmission and transition among all county buildings and departments much quicker and more complete, Barnes explained. “It just makes the internal system that much better.”

Long-term goals still include plans to implement a training center for the firefighters, EMS, and police. “The idea hasn’t been lost, but the process got lost to COVID,” Barnes stated, noting that the county is in discussion with the Northern Tier Career Center to use some land adjacent to the school. “The ideas are still in play that we would host seminars and workshops and training that would be open through the state fire training systems to the other counties.” 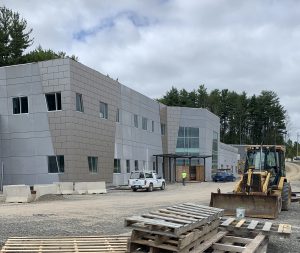