By: Rick Hiduk
In: Impact Fee
With: 0 Comments 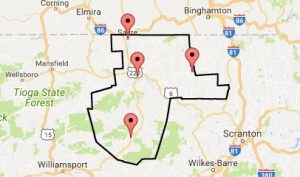 Municipalities in Bradford, Sullivan and Susquehanna counties within the 110th Legislative District will share more than $21.2 million in impact fee revenue derived from the natural gas industry during 2019, Rep. Tina Pickett (Bradford/Sullivan/Susquehanna) announced today.
The following impact fee revenue amounts were reported by the Public Utility Commission (PUC) for the three counties and their eligible municipalities:

“Act 13 continues to pay significant dividends for our local communities as drilling companies assist with the consequences of their activities,” said Pickett. “In addition to the impact fees, the natural gas industry remains an important job generator for the local economy and should remain so many more years to come.”
Statewide, more than $200 million was generated through impact fee collections during the 2019 production year, which is a decrease of $42.6 million from last year. The PUC said the decline was primarily driven by the lower average price of natural gas.
County and municipal governments directly affected by drilling will receive a total of $109 million for the 2019 reporting year. Additionally, $72 million will be transferred to the Marcellus Legacy Fund, which provides financial support for environmental, highway, water and sewer projects, rehabilitation of greenways and other projects throughout the state. Also, $18 million will be distributed to state agencies.

Since the enactment of Act 13 in 2012, more than $1.9 billion in impact fee revenues have been returned to communities across Pennsylvania. Checks are expected to be distributed in early July.