SCCTC executive director Alice Davis and superintendent Ken Cuomo greet graduates Austin and Aubre-Anna Sanko from the right side of their vehicle (above), while para-educator Kathy Filer and carpentry instructor Bruce Castelli meet them from the left during the June 16 drive-through graduation event. Below, Austin Woollett, a culinary arts student from Tunkhannock High School said that he met a lot of new people at SCCTC and enjoyed learning new things, like making crêpes. He was joined by his aunt, Sami Anello, sisters Chayeanne Wright and Izzy Carpenter, and his mother Hope Carpenter, with whom he decorated their car for the event. 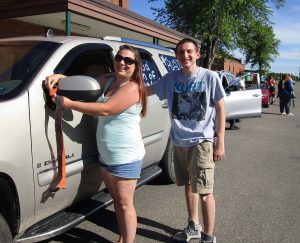 It was a graduation ceremony like no other in the history of the Susquehanna County Career and Technology Center (SCCTC) in Springville. The majority of the 140 high school students and 20 adults receiving diplomas and trades certifications participated in a procession of vehicles from one end of the campus to the other as school board members and administrators cheered them on.

Seniors at the Career Center, which is part of the Elk Lake School District, were happy that they were able to be physically present for the June 16 ceremony, rather than participate in a virtual event. Even though there was not a large audience to share their special moment, the event was live-streamed on YouTube (https://www.youtube.com/watch?v=fJjeeoCRs14&feature=youtu.be ), and photos of the students rotated on the digital sign board in front of the school. 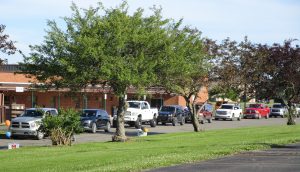 Families began jockeying for their position in the line-up until it stretched to the new CDL school at the far end of the campus. Many students, parents and siblings took the extra time to adorn their vehicles with balloons, streamers and banners to represent their respective districts of the seven from Susquehanna and Wyoming counties that have partnered with SCCTC.

At promptly 6 pm, the procession of eager graduates made its way from the high school to the Career Center. “Pomp and Circumstance” played as SCCTC instructor Gary Fenton (below) read the names of the graduates as they made their way under a balloon archway and through the parking lot between the two classroom buildings. 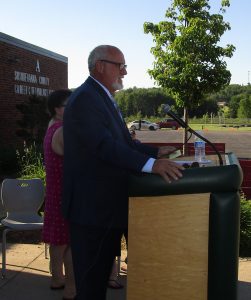 Faculty members were seated opposite the administrators and school board members so that they could approach both sides of the vehicles to greet the students. Instructors offered congratulations and welcomed the graduates to contact them for any follow-up needs.

Administrators gave each graduate a program, a memory book, a tassel, a key reading “This is the Key to Your Success,” and a bag of cookies. Graduates had the option of picking up their diplomas a few weeks ago, but each also received a packet that contained any industry or trade certificates they obtained.

“It was the best way to say ‘goodbye’ and ‘good luck’ and let them know that we are there for anything they need,” SCCTC executive director Alice Davis said afterward. “They are hands-on individuals, so this gave them better closure.” Some parents told her afterward that the event was much more than they had expected.

Cosmetology teacher Amy Bush related that, despite the absence of hugs, “It was great to see the students because we’d missed them.” While there was an underlying seriousness and sincerity to the ceremony, she continued, “It was a lot of fun too because it was more casual. They could have some fun, and I think we did too.”

Graduates also expressed their gratitude for being able to come back to the school, if not for the last time, and get an unusual but impressive send-off. “I’m glad that it’s not virtual because that would change the aspect of graduation,” said Austin Woollett, a graduate of Tunkhannock High School and SCCTC’s culinary arts course.

Elizabeth Hanyon was equally impressed with the dedication of administrators and teachers to the making sure that the students completed of their programs. “It’s hard to jam-pack everything into a situation like we had this year, but we made it happen,” said Hanyon, who graduated from Elk Lake High School in 2000 and enrolled at SCCTC to acquire her cosmetology instructors license.

“I think it was really beneficial to everybody that we could look them in the eye and congratulate them for their hard work through all this craziness that we endured,” building property maintenance instructor Steve Reinhart remarked. “We got to applaud their graduation, even though they were sitting in their vehicles. It gave it an element of finality.” Reinhart and his students plan to get together when group gatherings are again permitted. 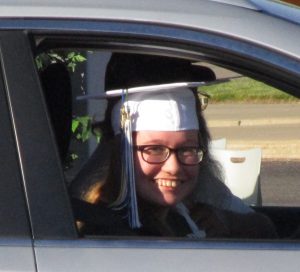 Elk Lake graduate Sarah Cobb was appreciative of the outdoor graduation event and everything she learned about health care over the years at SCCTC. She attended with her mother Loretta Cobb and grandparents George and Carol Gregory. Sarah will continue her education at Penn Tech and focus on dental hygiene. 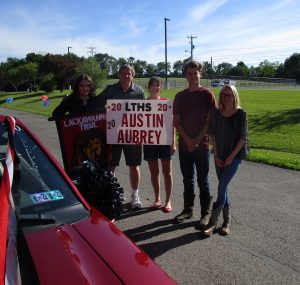 Twins and Lackawanna Trail graduates Austin and Aubre-Anna Sanko, pursued carpentry and cabinet making and cosmetology, respectively. Their mom, Carol Sanko, said that the siblings’ instructors when above and beyond what would be expected of them and never hesitated to return her calls if she had a question. Also celebrating were the twins’ father, Walter Sanko, and Mackenzie Remick. 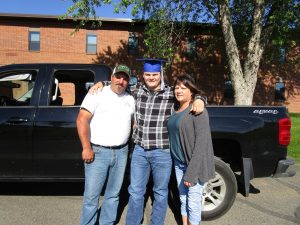 Carter Bixby from Susquehanna Community High School feels well-prepared to enter the workforce after completing the SCCTC welding course. The instructors were awesome, and he got to do all kinds of welding. Joining him on June 16 were his parents Jennifer and Keith Stalker. 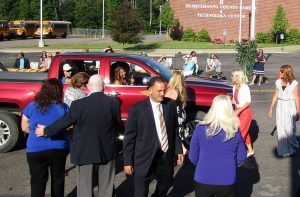 Elizabeth Hanyon is greeted by SCCTC administrators, teachers and school board members as she receives her cosmetology instructors license. In the truck with her are her husband, Michael, and children Caden Ramey and Emma Hanyon. 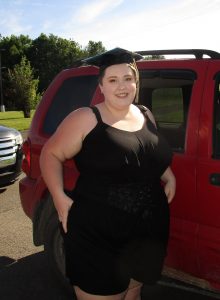 Crystalynn Richter of Laceyville was one of many cosmetology students who arrived early for the event so that they could take some group photos before joining the procession. 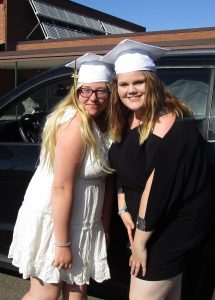 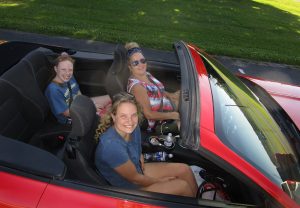 Alivia Hughes of Montrose Area High School completed the criminal justice program at SCCTC. She said it was a great experience and that she made a lot of friends. She will further her education in the same field at Lackawanna College. She was joined at the graduation ceremony by her aunt, Jessie Blaney, and sister, Ava Hughes. 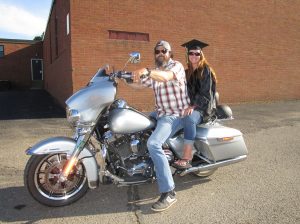 Nail tech graduate Mandy Bunnell and her husband, Bunnell, opted to bring their motorcycle for the parade. 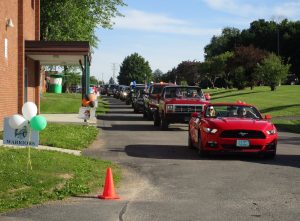 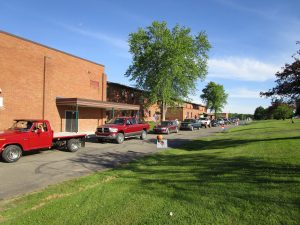 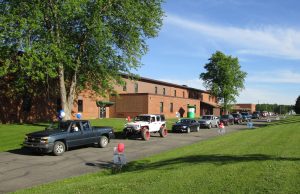 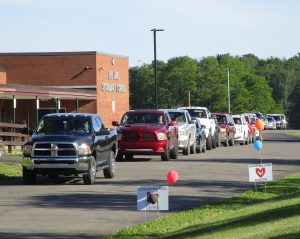 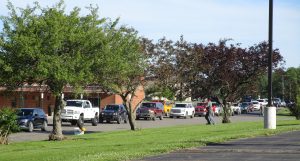 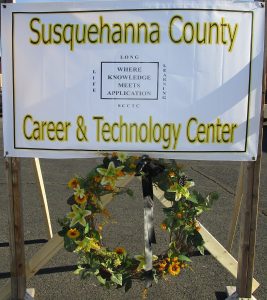 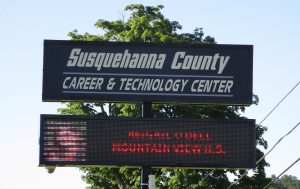