Cultural Center Gets Creative to Get Through the Downturn 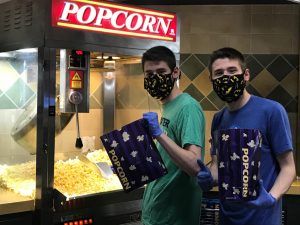 Samario’s Pizzeria (top, left) will team up with the Wyoming County Cultural Center for the sale of 600 pasta dinners on Sunday, June 14 to help the Dietrich Theater. Brothers Brendan (above, left) and Bailey Huff have been volunteering their time to make and sell popcorn at the Dietrich Theater during the shutdown.

Many businesses have been adversely affected by temporary shutdowns due to the COVID-19 outbreak, but non-profits are feeling the pinch too. The Wyoming County Cultural Center at the Dietrich Theater in Tunkhannock is generally a vibrant community hub but has been closed since March. Even when Wyoming County “goes green” under the governor’s reopening guidelines, the Dietrich’s operations will be limited to 50 percent of its capacity.

According to Cultural Center executive director Erica Rogler, operating expenses exceed $5,500 per month even with the theater, its classrooms and community meeting spaces closed. While it has been possible to defer payments for several months on loans, interest will continue to add up. The spring and summer film festivals have been called off, and the famous Founders Days strawberry shortcake will not be sold this June.

All employees have been laid off, and key fundraisers have been postponed or canceled altogether. What the Dietrich Theater has not lost, Rogler is proud to report, is its sense of family and a staff so dedicated to its future that they are volunteering their time and developing unique ways to keep their supporters engaged and the bills paid. They include online classes, a photo contest, virtual cinema, a movie contest, and popcorn sales on Fridays.

Tuesday, June 2 marks the kickoff of the “Help the Dietrich…Help the Community” campaign, though some of ways to get involved are already under way.

Passersby will notice that the marquee is currently boasting the names of graduating high school seniors who have been working at the theater. For just $75, supporters can rent one side of the marquee for three days to light up their own seniors’ nights. Other options include marking milestones like birthdays and anniversaries. Marquee rentals can be arranged by calling 570-836-1022 ext. 6.

Annual memberships and the purchase of gift cards are a great way to financially assist the theater during its dark days, as well as after the doors can be reopened. Movie fans can rent films to watch at home through special arrangements between the Dietrich and a variety of independent movie producers. Around 50 percent of the rental fee will go to the theater. Interested readers can find details at www.DietrichTheater.com.

An even better deal will be offered on Sunday, June 14 from 3 to 7 p.m. when Samario’s Pizza, situated just east of the theater on Tioga Street, will donate 600 pasta dinners at nine dollars each and pass on 100 percent of the proceeds to the Wyoming County Cultural Center. The penne pasta meals include two meatballs, Samario’s signature sauce and a dinner roll.

According to Trish and Sam Parlopiano, owners of Samario’s, “We wanted to do this for the Dietrich because the theater is the heart and soul of our area.”

Tickets can be purchased in advance via the theater’s website or by calling 570-833-1022 ext. 2. Dinners can be picked up at a specified time from a tent on the green space at the intersection of Bridge and Tioga streets.

Popcorn sales will continue on Fridays and, of course, the easiest way to help is simply by mailing a donation to the Dietrich Theater at 60 East Tioga Street, Tunkhannock, PA.

The staff of the Wyoming County Cultural Center, who have committed to working without pay until the organization is again on solid footing, looks forward to bringing people back into the theater when Wyoming County gets the green light. Updates are posted regularly on the website and the Dietrich Theater Facebook page. 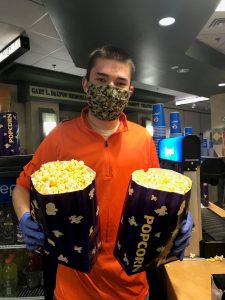 Bryden Huff (above) is one of several employees-turned-volunteer who has assisted with curbside popcorn sales on Fridays while the Dietrich Theater waits for the opportunity to reopen.