Dustin Rodney Brown, 23, Laceyville reportedly gave law enforcement the slip several times last week, including checking himself out of a Scranton hospital but not checking back in with police. He was taken into custody at 9:55 Tuesday evening without incident at D&C Fuel Sales in Washington Township, after stories about his disappearance were posted online and television.

On Friday, Feb. 7, Brown was discovered at about 8:30 pm by first responders and Meshoppen police chief John Krieg slumped over in the drivers seat of a red 1999 Ford pickup truck that had come to rest against the rocks along Meshoppany Ridge Road (SR 4015) in Meshoppen.

Brown was unresponsive, and the paramedic on the scene asked Krieg if he had anything to assist in breaking the rear window to reach him. Krieg provided an instrument with which the paramedic used in an attempt to unlock the driver’s window.

According to the Affidavit of Probably Cause, Brown suddenly awakened and started revving the engine and trying to get the truck into gear. When he was finally able to dislodge himself from the rocks, Krieg and the paramedic had to jump out of the way to avoid being struck by the truck, as Brown turned toward toward Route 6, running the stop signs at both Sterling Street and Route 6 as he crossed over to Bridge Street.

A fire truck that had been dispatched for the accident was entering the bridge over Meshoppen Creek from the north side with emergency lights on, but the driver stopped as the pickup truck driven by Brown was headed directly toward it, striking the front of the fire truck and causing damage to the bumper. There were five firefighters on board, including Meshoppen Fire Company chief Chris Carney and president Travis Prevost, who was driving.

“We saw the truck coming across the intersection and stopped on the bridge,” Carney related. With nowhere to go, Carney continued, “We braced for impact.” As Brown’s vehicle was traveling at a low speed, the large bumper on the fire truck absorbed the hit, and the firefighters were not hurt.

Krieg reported that Brown then backed up his truck to Route 6 and turned west into the path of another pickup truck that was turning into Community Bank. That driver also stopped to avoid a collision, but the red Ford pickup truck went up onto the curb, hit the other truck, and continued west on Route 6. It had snowed that day, and road conditions were compromised.

Krieg followed Brown, noting that he was driving on three tires, as the front right tire had blown out when he hit the curb and was throwing sparks. Brown turned left onto Sherwood Road and then Mayo Beach Road until he struck an embankment on private property and spun out.

Brown fled on foot into the darkness.

Backup was requested from Tunkhannock borough and township, as well as from the Pennsylvania State Police. Krieg also requested the drone from the Wyoming County Communications Center, a K-9 unit from the Susquehanna County Sheriff’s Office and a helicopter from PSP. After trailing Brown’s footprints along the river, a state trooper found a pair of discarded work boots, suggesting that Brown was now continuing his escape shoeless.

“He was out there for a long time, and the weather was not nice,” Krieg told this reporter.

Eventually, Brown was found crouched along a stream in Black Walnut behind some brush. The Affidavit notes that he resisted arrest and was tased and taken into custody.

On his person, Brown allegedly had five packets of heroin labeled “Heisenberg,” a used hypodermic needle, a folding knife and an iPhone. He had only socks on his feet and nothing on his hands and was transported to Tyler Memorial Hospital, where blood was drawn prior to his transportation to Moses Taylor Hospital for treatment of hypothermia. The blood test results were not yet available as of this writing.

Krieg went to Tyler Memorial Hospital shortly after midnight, when Brown was still in the custody of State Police. Brown was speaking freely on his own without being asked anything, Krieg noted.

Brown is quoted as having said that he’d been free of drugs for more than three years. He also reportedly said that he was actually in the back seat of the pickup truck and that the people driving it were holding a gun to his head and threatening to kill him and his family. He denied being in an accident. The registration and inspection were both expired. He was operating the truck with no tail- or headlights.

The truck, which was towed to Route 6 Auto Body had eight unused needles and one used one on the front floor.

According to Krieg, Brown was released to the custody of Moses Taylor Hospital due to his need for medical attention. When he awoke on Saturday morning, Brown signed himself out of the hospital and disappeared.

After Krieg arrested him at the service station along Route 6, Brown was arraigned by magisterial district judge Jennifer Vandine from Sullivan County via teleconference. He is currently housed at the Wyoming County Correctional Facility in lieu of $50,000 bail. His preliminary hearing with MDJ David Plummer is set for Tuesday, Feb. 25. 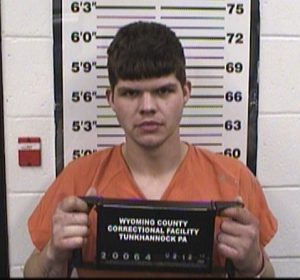 He has been charged with eight counts each of aggravated assault and reckless endangerment, two counts each of an accident involving property damage and leaving the scene of an accident, as well as fleeing and attempting to elude law enforcement, DUI of a controlled substance, and providing false information.

(This is an updated version of a story originally posted on February 11, 2020)