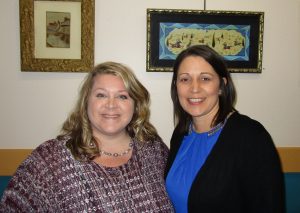 Billings-Seiler is the project manager for the Phase II of the Façade program for Bradford and Wyoming counties, through which historic Route 6 passes from west to east. She made it clear, however, that all properties within the borders of both counties are eligible for grants. Sturdevant confirmed that properties as far as 20 miles off the highway were deemed eligible for project reimbursement in the PA Wilds Region, where Phase I of the Façade program was conducted last year.

Participants at the informative session included business owners from both counties and numerous municipal officials, as borough and township buildings, along with churches and non-profit entities are eligible for up to $5,000 to put towards projects valued at $10,000 or more.

All attendees received a packet containing an application, a cover letter defining “façade” for the purposes of this specific grant, and a printed copy of the slide show, which provided details on work that would be deemed reimbursable or not for exterior improvements. The PA Route 6 Alliance has made $100,000 available to the two-county region, which will likely fund more than 20 projects.

Some important criteria up front to consider is that the legal owner of the building must sign the application for a project to be funded. Tenants operating businesses within these structures were encouraged to work with the building owners to define the scope and estimate the cost of the projects, but the responsibility lies with the owner, who must submit the proper paperwork after the project is completed to be reimbursed.

There appears to be some gray area on both lighting and electrical wiring that Billings-Seiler and Sturdevant said that they could work through with applicants to ensure adherence to guidelines set forth by the PA DCED, which is funding the program. All applicable zoning and building codes within a given municipality must also be met.

The applications will be reviewed by a committee that includes both the Bradford and Wyoming county planners, leaders of the two tourism agencies, and EMHR executive director Cain Chamberlin. Extra points will be given to projects that adhere to the original historic nature of a structure and to applications from Tunkhannock and Wyalusing, both of which are registered with PA Route 6 as Heritage Communities. Tunkhannock was in fact the official PA Route Heritage Community for 2018. “We love Tunkhannock,” Sturdevant remarked.

The money requires a full match, and approved projects can begin as early as late April to be completed within 120 days. The match can include grants from any agencies other than the DCED or DCNR. Sturdevant told an audience member that it takes up to eight weeks for the finished project to be reviewed and the expenses reimbursed.

Some unique situations that were brought up included stand-alone structures with sides that also face the highway. In some cases, Sturdevant answered – especially for buildings on corner lots – two or more sides may be deemed eligible. Backsides of buildings and roofs are not eligible under any circumstances.

A plaza owner asked how to apply for the grants if he were to address different elements on the storefronts of several but not all of the businesses in the strip. The DCED stipulates that not more than $5,000 will be awarded to any one individual. The same answer was given to an audience member with business properties in both Bradford and Wyoming counties. Those are separate projects, said Sturdevant, but that’s not how the project guidelines work..

“We want to give this money away,” said Billings-Sieler. “If we do well with the program this time around, the money could come back to us in a few years.”

Feb. 3 was the first day that applications could be submitted, and the deadline for receiving applications is March 13. Projects will be awarded around April 15. Billings-Seiler and Sturdevant were slated to conduct the same informative presentation in Towanda on Tuesday.

Property owners who would like an application and more information can reach out to Billings-Seiler at facade@paroute6.com or 812-774-7082.