Canton FFA members (above, from left) Hunter Hartford, Cheyenne Bastian-Brown, Camille McRoberts and adviser Tom Hojnowski in front of their landscape exhibit after conducting a demonstration on building bat houses on Monday at the Pennsylvania Farm Show.

Canton FFA members helped to open the PA Farm Show on Monday morning with the first public presentation of the day.  All were a bit surprised when they awoke at 4 am at their homes to a couple inches of new snow,  and their bus arrived a bit late, delaying their departure.

“The judges were late too, so it was OK,” said Camille McRoberts, one of four presenters. The audience, she noted, was much larger than she expected.

In all, 22 Canton area youths made the trip to Harrisburg with 4H adviser Tom Hojnowski and other adult chaperones.

Some had helped to construct a landscape exhibit that ended up next to the stage from which Camille, Hunter Hartford, Cheyenne Bastian-Brown, Ethan Engel and Gracie Mead demonstrated how to build bat boxes.

According to Cheyenne, Ethan came up with the idea while the group was on their way home from a national FFA conference in Indianapolis in August.

After researching the current status of bats in Pennsylvania, “We learned that the decline of bats is a big problem across the country due to disease and loss of habitat,” said Camille.

The bat houses the group had already constructed were on stage with the presenters and ended up in the landscape display for Farm Show guests to enjoy for the rest of the week.

There were plenty of other activities and exhibits for the teens to enjoy during their full- day stay at the Farm Show Complex. Cheyenne and several fellow FFA members were on their way to an Ag Teacher presentation by Penn State University.  Cheyenne had previously participated in similar classes and has conducted ag-themed classes on her own for Canton eighth graders. 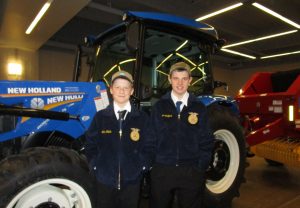 Noah Gibble (above, left) and Tyson Bedford were admittedly “along for the ride” with their fellow FFA presenters but enjoyed the experience and exhibits such as a large tractor display. It was Tyson’s first visit to the PA Farm Show, while Noah had been to the event several times when he was younger. 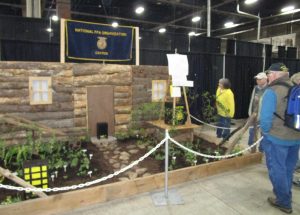 Farm Show guests admire the landscape display constructed by Canton FFA members, in which three of the bat houses they built were placed.